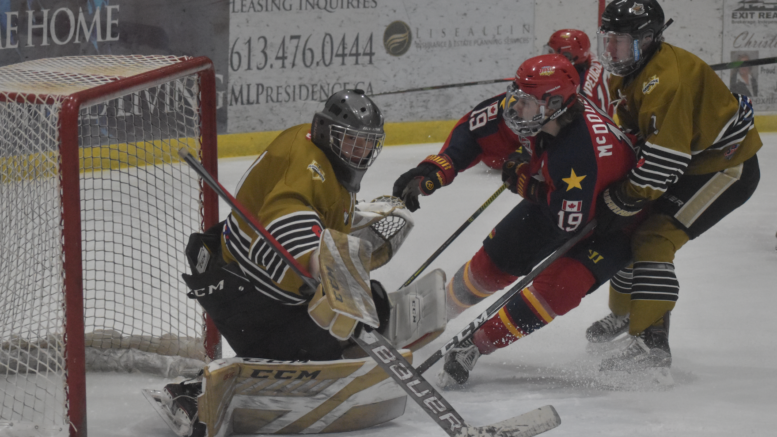 BUSY AT THE NET Trenton Golden Hawks netminder William Nguyen made 37 saves in Game 4 of the Spring Development Series to vault his team to a 4-2 win at Lehigh Arena on Friday. Wellington forward Brodie McDougall (pictured) finally solved Nguyen late in the second with a shorthanded effort. (Jason Parks/Gazette Staff)

Unlike the 2020 Hasty P’s Cup where it took the opposing Trenton Golden Hawks nearly four games to figure out the Wellington Dukes en route to a series championship, the Ontario Junior Hockey League club from Quinte West is making sure a a dramatic comeback isn’t in the offing this time around.

After the Dukes took Games 1 and 2 of the spring development series in somewhat convincing fashion, the Golden Hawks turned the tables last week and took Games 3 and 4. Trenton managed to claw to a 2-1 double overtime victory at home on Wednesday to get back into the series and then evened the score on Friday afternoon at Lehigh Arena, frustrating the hosts and punching out a 4-2 win.

After a scoreless and sloppy first period, the Golden Hawks jumped on Wellington in the second stanza in Game 4. Phil Caron’s centering pass at the slot deflected straight to the stick of Caden Kekewich under a minute into the frame to give the visitor’s a 1-0 edge as the Kingston native went top shelf over a sprawling Eli Shiller.

Just over five minutes later, Caron was at it again, this time on the powerplay. 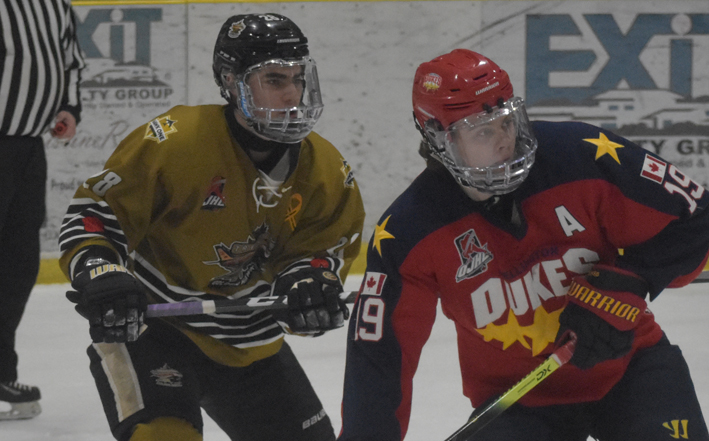 GETTING EVEN Brodie McDougall is watched closely by Trenton defenceman James Logan during the Dukes 4-2 loss to visiting Trenton Friday. The clubs met yesterday in Trenton for Game 5 and are scheduled to play Game 6 in Wellington on Friday. (Jason Parks/Gazette Staff)

With Tyler Ignazitto off for a stick infraction, Caron put the puck to the Wellington blueline where Nathan Oickle snapped a wrist shot that navigated a maze of legs and beat a screened Shiller at the 6:19 mark of the second.

Ahead by a pair, the Golden Hawks made it a three goal spread at the midway point of the second. Left to his own devices, a harmless looking dump in attempt by Evan Jamieson at 11:43 was played like a bag of toys by Shiller. Unchecked at the goal mouth, Joel Chauvin was able to pounce on a juicy rebound and eventually whacked the puck into the Wellington net for a 3-0 Trenton lead.

Wellington would get a small measure of revenge prior to the close of the middle frame thanks to some nifty special teams work. With Wellington’s Mason Reeves in the sin bin, Brodie McDougall anticipated Wellington defender Aaron Brown gaining control of the puck below the goal line.

Brown collaborated with the Wellington forward, air mailing a clearing attempt to centre ice where McDougall gobbled up the feed and went in on Trenton starter William Nguyen, beating the Golden Hawk netminder low to the stick side for the Dukes’ first of the contest.

Wellington would burn like a house fully involved in the third, sending 19 volleys Nguyen’s way in the frame but the locals must have had a sense it wasn’t going to be their day early in the period.

A misplayed puck just under two minutes into the second lead to a partial breakaway by Trenton’s Ryan Glazer. The Montreal native got to Shiller alone and snapped a shot that the Wellington goalie got a piece of but not enough to stop the disc from tumbling into the Dukes net at 1:49.

Wellington didn’t go down without a fight and manged to answer the Glazer goal at the end of the contest. Cole McGuire managed to spot captain Ben Addison in the slot with Shiller on the bench for the extra attacker and the Dukes were able to make it a 4-2 game with under 30 seconds to play.

On Wednesday, Wellington went with Daniel Boethlo in net and the effort of the Nottawa, ON native was a key reason Game 3 was scoreless after one. Wellington was flatfooted throughout the frame as the host Golden Hawks held a 16-3 shot advantage through the opening 20 minutes as the buzzer sounded with a 0-0 score.

For the first time in the series, Trenton opened the scoring. With a five-on-three man advantage, defenceman Oickle was able to spot a wide open Jaxen Boyer who had time and space to beat Boethlo at the 5:35 mark.

With the shots almost even in the second, the Dukes started to get their feet moving underneath them and, in the third, finally solved Trenton starter Joe Ranger. With Trenton’s Chauvin in the Duncan MacDonald Memorial Gardens penalty box for high sticking, McGuire would set up Ignazitto with exactly three minutes left in the contest to square the affair at 1-1.

Wellington was lucky to survive the first overtime as a Ben Hamilton minor left them at a four on three man disadvantage and Boethlo, a former Stayner Siskin and Penetang King, was outstanding, stopping six Trenton shots.

In the second overtime, Trenton finally solved the Wellington goalie as Jake Laville was able to break in on the Dukes net and fire home the Game 3 winner.The overtime loss means Wellington maintains a 5-4 lead in points in the series.

The series continued Wednesday in Trenton for Game 5 with Game 6 in Wellington on Friday. Game 7 is scheduled for Monday at the Gardens and the final game of the series is slated for the final day of March at Lehigh Arena.