Lest anyone thinks there was great joy in seeing a piece of insidious and transphobic advertising that appeared in the pages of the Wellington Times go viral via social media last week and the tumult that called our ‘competitor’ to account, that’s not the case.

We appreciate publisher Corey Engelsdorfer’s effort to own up the mistake of selling advertising space in the March 10, 2021 edition to the Canadian Women’s Sex-Based Rights Group in the Letters to the Editor Section of today’s Gazette and trust in the editor’s pledge to be better, ensure a similar situation doesn’t arise in the future and look at this mistake as an opportunity for the community to have a fresh and better discussion about inclusivity and equality. We hope to match the oath of the Times to share experiences and stories of all members of this community-most importantly, those who might have not had the ability to come forward in the past. What’s needed more than ever right now is discussion.

And the words for that discussion must come from the LGBTQ2 community. Full stop.

As a graduate of the Ontario Minor Hockey Association’s Gender Identity and Gender Expression Training for Team Officials-A prerequisite to be involved as a bench staff member of a local minor hockey team- this corner thought it might have a better grasp on gender identification, better use of pronouns and supportive language. How wrong we were as the social media discussion unfolded last week.

Perhaps the verbiage and syntax is beginning to become more widespread but many folks aren’t -or at least weren’t- aware as to the depths at which gender exclusionary organizations are ready to stir negative emotions based on unlikely or improbable worst-case scenarios.

In the shadow of International Women’s Day and without critical thinking or deeper examination, the advertising could have passed muster with a mind that was preoccupied with the previous story or the next page. And that’s one of the underlying issue.

As a cis gender male, we are loath to attempt to even wade these waters but if you subscribe to the guiding principle that trans women are women and their rights as human beings are equal then you can start to examine the concepts in the piece of advertising and see the way in which the group wants to create subtle tiers of rights between a cis gender woman and those who identify as a woman.

That divisiveness people like JK Rowling are espousing is wrong, hurtful and discriminatory. In the interest of getting better and progressing towards an equitable society, what’s needed throughout the world and right here in Prince Edward County is a welcome and safe setting for more first hand experiences and stories to come to the surface. That’s the first step on the path to understanding. Hopefully, that’s what was gained in this weekend’s protest in Wellington and we applaud Engelsdorfer for attending as well as those who participated as a signal that divisive rhetoric in our community will not stand.

LEADERS LEADING HORSES TO WATER AND ALL THAT

Conservative Party Leader Erin O’Toole can be forgiven if his face is a little red after this weekend’s virtual policy convention. The leader likely didn’t escape the Zoom cameras for the brilliant mid-March sunshine that baked this part of Canada.

No, O’Toole’s reddish hue was probably borne of the fact a day after explaining to the attending party faithful tuning in that he “will not allow 338 candidates to defend against the lie from the Liberals that we are a party of climate change deniers.” With an incredibly low bar to waddle over, the membership rebuked its leader’s message anyway. Asked to simply “recognize that climate change is real” and that “The Conservative Party is willing to act,”delegates defeated the policy resolution 54 per cent to 46 per cent.

Considering every other party in the 2018 election had some sort of Climate Change plank in their platform and the lack of one was noted as a reason as to why the Conservatives were unable to take down a vulnerable Justin Trudeau, how many times did O’Toole’s hands meet his forehead after the ill-fated resolution went down in a heap?

The proposed climate change resolution wasn’t so much as a plank as it was a splinter. And even then, O’Toole was unable to bring the crowd together and pay even lip service to Climate Change.

The party faithful’s inability to grasp the idea that the rest of the Canadian populace is concerned about climate change and wants a government that will address it in a meaningful way will hobble the CPC until supporters can come to terms with that rigid fact. 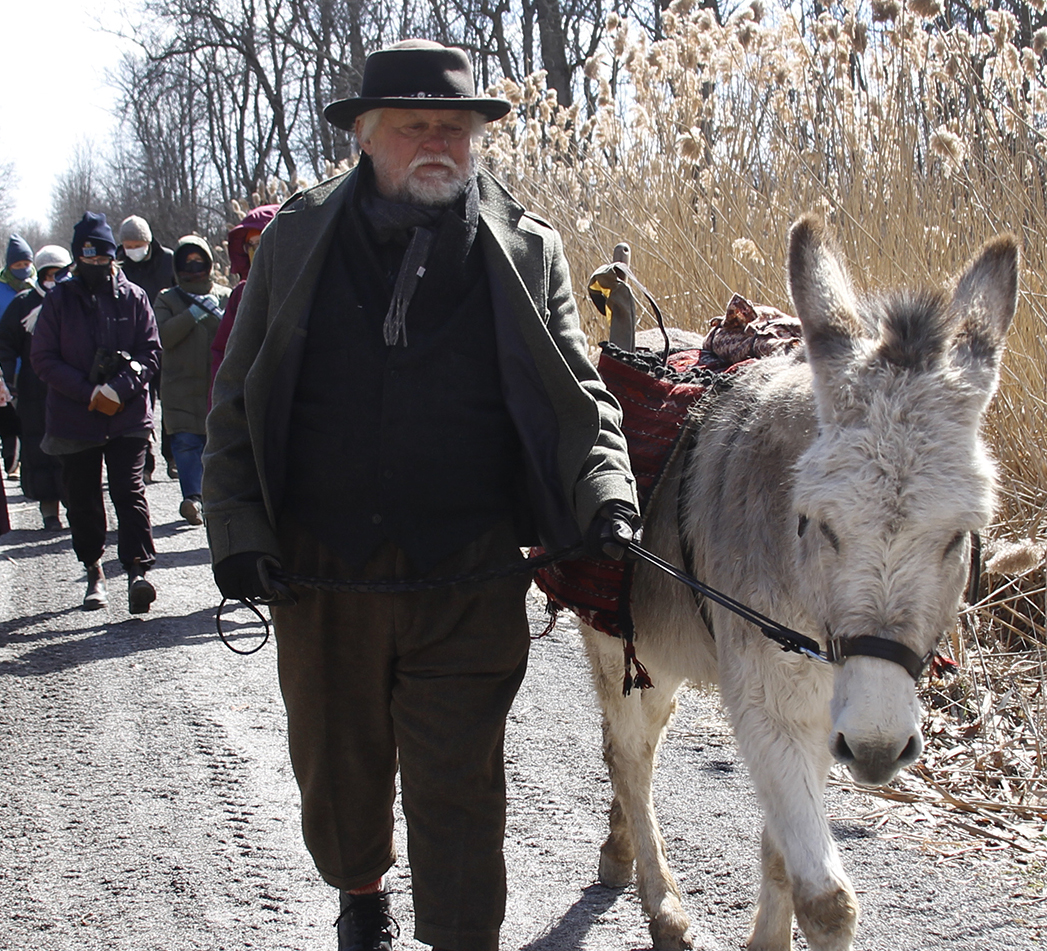 THUNDER IN HIS STEPS – Even though the wind was brisk and blowing hard, the fifth chapter of DeRAIL’S Walking with Thunder: Ice Out on Wellers Bay by Conrad Beaubien, took to the Millennium Trail for a nice afternoon stroll with around 15-20 masked participants, this time starting at the Smokes Point Road entrance. For details on the latest walk which included original stories and poetry. For the full story, visit www.pictongazette.ca/2021/03/19/walking-with-thunder-series-takes-fifth-trek-along-millennium-trail/ . (Desirée Decoste/Gazette Staff)