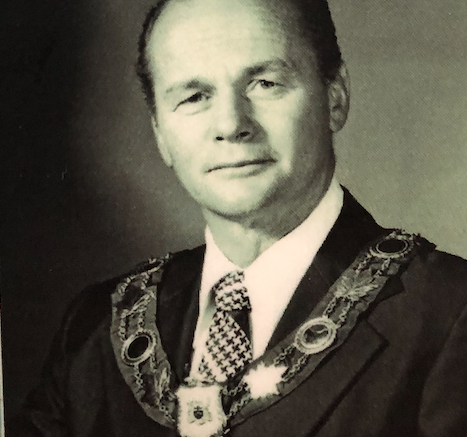 A leading  figure in the Prince Edward County worlds of politics, agriculture and sport has passed away.

The former County Warden, MPP, World Champion hockey player and beef and grain farmer had been of ill health for a number of weeks and had spent time at both Prince Edward County Memorial and Belleville General Hospital.

MacDonald, 93, was a life long Prince Edward County resident, spending his entire life on the  MacDonald farm on Athol Bay just north of  Outlet and south of the Sandbanks Provincial Park proper.

MacDonald’s childhood naturally involved farming, much of it diversified amongst various sectors as was the local practice at the time. A small dairy herd, field crops and canning crops were among the regular produce at MacDonald Farms.

In addition to agriculture, the MacDonalds ran a renowned cottage operations on the shoreline called Lakeland Lodge with guests coming from all over North America to spend summertime on Lake Ontario. 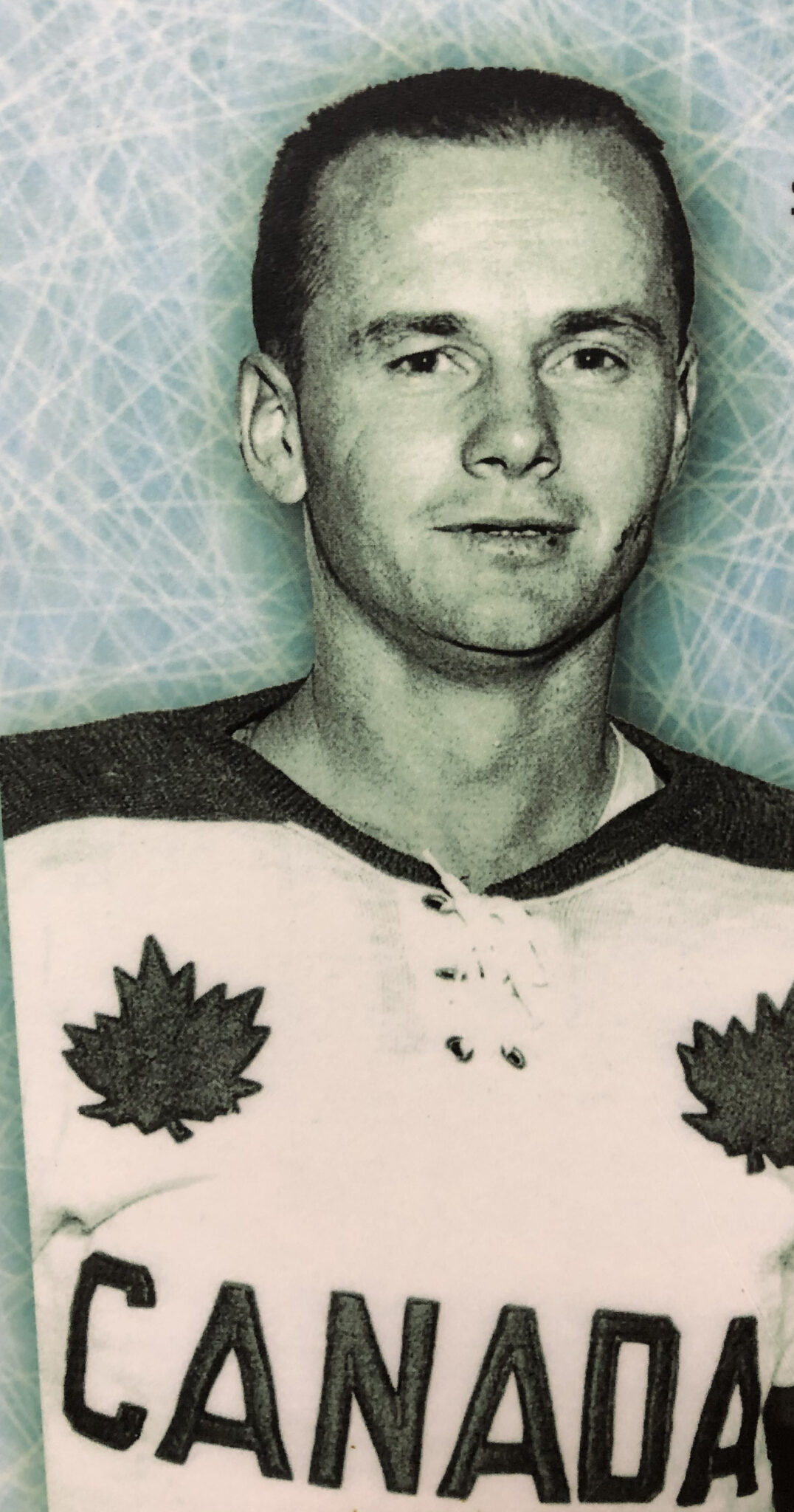 Keith MacDonald was a member of the Canadian entry at the 1959 World Hockey Championships in Prague, CZ. (MacDonald Family)

One of several amenities at Lakeland was a tennis court and MacDonald honed his love of the racquet sport well enough to be Albert College champion while attending secondary school there.

But MacDonald’s first love was always hockey and in a long-form interview with the Gazette to celebrate the paper’s 175 Anniversary, the future hockey star recalled his father Norman putting him on skates and allowing him to push a chair around a frozen part of the Bay in front of the house at the age of 3. In the winter, MacDonald became a well known figure at the rinks and played against much older competition as a teenager.

In the summer, baseball and softball were the sport of choice for MacDonald as he grew to be a key component of championship clubs both in Prince Edward County and Belleville.

With farming chores complete, MacDonald would head off to competition post haste.

“I’d grab a bottle of milk, a couple of bananas and drive like hell to Belleville or wherever I needed to be and I was ready to go,” MacDonald told the Gazette in 2007.

MacDonald played the hot corner for several Ontario Baseball and Ontario Amateur Softball Associations entries including the Baxter Silver Ribbons who played out of Bloomfield and the Belleville Batas and was an OBA All Star, earning a trip to play in an All Star game at famed Maple Leaf Stadium in Toronto.

MacDonald earned a reputation as a no-quit competitor on the diamond, barrelling over competitors in the base lines and never giving an inch.

That attitude translated to the hockey arena where scouts of a newly formed Senior A club in Belleville sponsored by Picton Mayor and business magnate H. J. MacFarland were looking for local talent.

Pugnacious and rambunctious, MacDonald was suited to his role on the club as someone that could inject life into a lineup and make the other squad honest.

“I lost as many fights as I won,” MacDonald recalled. “But it I could go out there and help the team by playing my style and doing whatever I could, I was going to do it.”

Point Anne native and Hockey Hall of Fame member Bobby Hull worked out with the Macs as a youngster prior to embarking on his storried career and once said of MacDonald “He was tougher than a night in jail.”

MacDonald recalled facing off against the Kelowna Packers in the 1958 Allan Cup, hosted in the BC city. After winning Game 1 of the best of seven series, the Macs fell behind 3-1 and were facing elimination after the Packers started to take liberties behind the play. With a trip to the 1959 World Championships on the line, player/coach Ike Hildebrand came back to the Belleville bench after a particularly tough shift and told MacDonald to “Get out there and soften them up.”

As if sitting on a spring, MacDonald was unleashed into the fray and turned the tide back into Belleville’s favour as the Macs stormed back to win three straight and the trophy emblematic of Senior A hockey supremacy.

MacDonald’s role was diminished the following season as the club conditioned itself for the restrictions of international play, a style that wasn’t exactly MacDonald’s speciality.

However, despite not playing, MacDonald did have bit role in the World Championships in Prague, Czechoslovakia.

Captain Floyd Crawford implored MacDonald to come to the dressing room before the deciding game and speak to the squad.

“Just the fact they thought I meant something and I could provide some motivation in that moment made me feel pretty special,” MacDonald said.

As a representative of the Township of Hallowell, MacDonald starred in the political arena, always being a champion for local ratepayers. In the days long before the terminology of “proper channels” was espoused by municipal representatives, a phone call to Councillor MacDonald precipitated near immediate action.

MacDonald took pride in his record and his popularity would lead to a lengthy tenure first as Reeve of Hallowell, County of Prince Edward Warden in 1974 and then later as representative of Hallowell when amalgamation took place in 1998.

That stretch of municipal politics was interrupted in 1987 when MacDonald was elected to the Prince Edward-Lennox seat of the Ontario Legislature and served in leader David Peterson’s Liberal government.

MacDonald lost his seat in 1990 to NDP member Paul Johnson although the setback wasn’t as devastating as one might think.

In a condolence message shared by Bay of Quinte MPP Todd Smith, the Minister of Children, Community and Social Services said he was “Saddened to learn of former MPP Keith MacDonald’s passing.”

“I’ll always remember how told me he hated being at Queen’s Park away from his family and his beloved home,” Smith said.

Back at Shire Hall and the horseshoe, MacDonald continued to serve his community well. 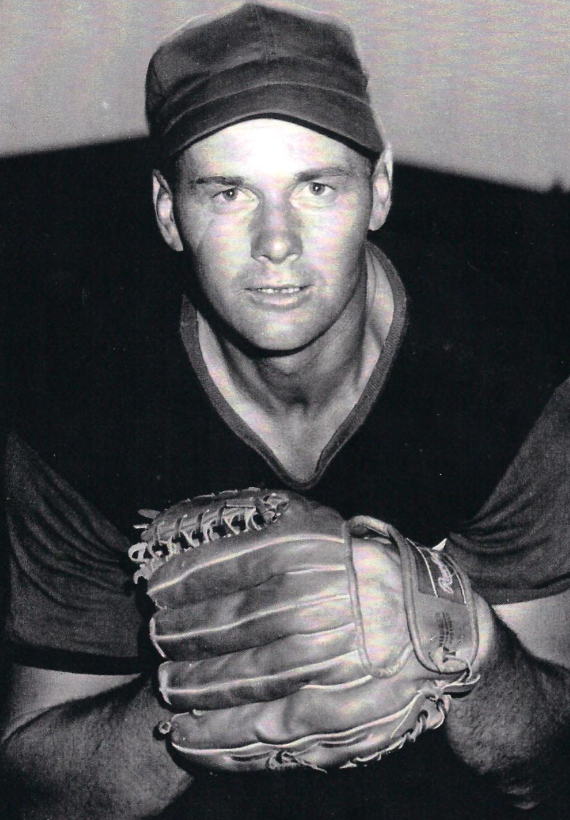 Former County of Prince Edward Mayor and council colleague Robert Quaiff sat at Shire Hall with MacDonald for many terms and said no one was more sincere about serving the people of Prince Edward County.

“He treated taxpayers’ money as if it were his personally, challenging staff on every nickel and whether it was money well spent,” said Quaiff. “What a lot of people didn’t know was that under all that fire and brimstone was a man with a heart as big as gold, a man that would do anything for you.”

Quaiff added that MacDonald’s example taught the former North Marysburgh representative how to respect the role of Councillor and always remain professional.

“You rarely saw Councillor MacDonald without a tie on.”

He added MacDonald was always the first to arrive for meetings and had a passion for politics.

“I’ve seen him ejected from a couple of meetings due to his over excitement on specific issues,” Quaiff noted. “His commitment to the residents of Prince Edward County will be unmatched in the future.”

MacDonald is survived by his wife Eleanor Lindsay MacDonald and her children Jim and Jennifer.