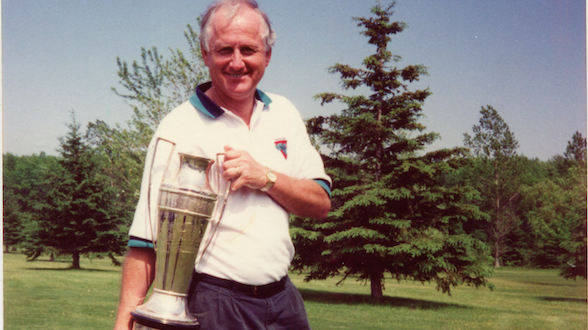 Famed local sportsman Carl Stacey with the Quinte Cup. Stacey once pitched a 19 inning, complete game win and hit a home run in a 1966 softball contest with a broken left arm. (Stacey Family)

The man who authored one of the most incredible athletic feats in Prince Edward County history has passed away.

Perhaps lost in the news of the death of World Champion hockey player and former MPP Keith MacDonald this weekend was the passing of Picton’s Carl Stacey, an outstanding golfer, hockey and softball player.

Stacey passed away at his home on Friday at the age of 77.

Stacey was well known for his prowess on the links as evidenced by his five (1969, ’71, ’73, ’83 and ’91) club championships at his home course, the Picton Golf & Country Club. The Picton native was a longtime member of the Picton entry that competes in the annual Quinte Cup tournament, representing the local club an estimated 40 times during which Picton captured the regional team golf crown 10 times.

With thousands of rounds under his belt, the local duffer was able to develop his game to within a stroke or two of scratch during his prime and managed to fire a total of seven aces during his decorated career.

One of those hole-in-ones came when he set the Picton club record for the lowest round recorded (28 strokes), firing an ace on the final hole of the former nine hole course.

At the old Picton arena, Stacey helped power the 1965 Picton Intermediate B squad to an All Ontario title and the agile skater played recreationally until just recently.

On the diamond, the PECI alum was able to toe the rubber with the best fireballers in the region and was a key player to four of Ontario Amateur Softball Association Intermediate champions in 1964 (Bloomfield), ’68 (Picton), ’70 (Madoc), and 79 (Picton).

Stacey’s fifth OASA championship came as a coach in 1983. Taking on the skipper duties of Wellington’s Squirt entry which was floundering, Stacey rounded the squad into shape in time for the OASA play down tournament which was hosted locally.

Dubbed the “Miracle Squirts” by the Gazette that summer, the previously winless club went on to catch lighting and win the ’83 Squirt D OASA title.

While the legacy of Stacey’s sporting career featured tremendous high notes and significant contributions, his Herculean efforts in an playoff game at the old Queen Elizabeth diamond is most certainly one of the best stories in the annals of Prince Edward County sports history.

With his left arm in a cast, Stacey pitched 19 innings and emerged the 4-3 victor in a Belleville and District Softball League playoff game against the Ellis Juniors.

Stacey would fan 24 batters in the game and hit a one-handed home run in the late going to push the locals ahead 3-2. The Juniors would tie it up in the top half of the final inning but Elden Carson’s base hit in the bottom of the 19th ended the three-and-a-half hour affair as Elden Gray scrambled home for the game winning run.

Creighton Lockyer of the old Picton Athletic Association called it the longest softball game ever played in the town and described the event in the Picton Gazette as “Fantastic.”

As both were long time and outstanding contributors to sport in the County during the 60’s and 70’s, Stacey and MacDonald were ironically teammates on that Picton Kinsmen squad of 1966.

Carl Stacey is survived by his wife Joan and children Joe, Bill and Marty.

Due to Covid restrictions, a gathering to celebrate Carl’s Life will be announced and held at a later date. Online condolences may be shared at www.ainsworthfuneralhome.com Memorial Donations to “Love your Library” (www.peclibrary.org) or the PEC Minor Hockey Association would be appreciated by the family.