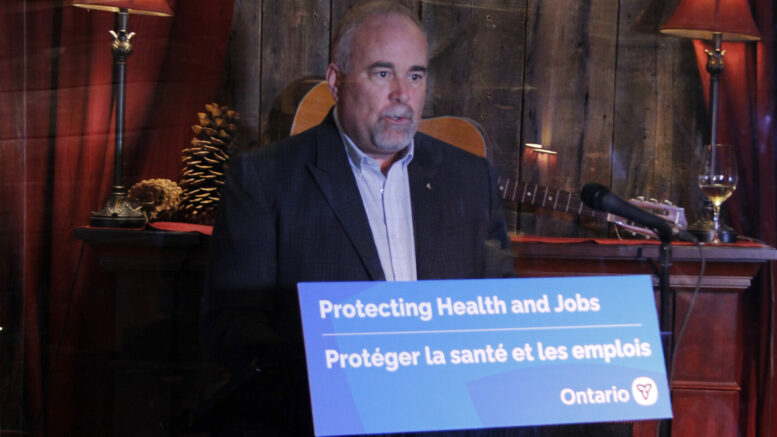 A park management plan for Sandbanks Provincial Park is expected to be part of an upcoming announcement by Minister of Environment, Conservation and Parks Jeff Yurek.

Bay of Quinte MPP Todd Smith was at Karlo Estates near Wellington  Monday to tour the winery and tout  2021 Budget initiatives promoting safety and support for small businesses and tourism operators.

When asked about the recent announcement regarding free Provincial Park day passes Monday (excluding holiday Mondays) to Thursday for the entire park system including Sandbanks, North Beach, Presqu’ile, Bon Echo etc.  from May to September, Smith wanted to assure local residents there would be planning in place to help deal with any overflow or added influx of day use visitors to the local parks.

“I’m hoping that Minister Yurek is going to make the announcement here in Prince Edward County,” Smith told the Gazette.  “He’s been here many, many times and has been working with Mayor Ferguson and the team at Shire Hall to make sure this park management plan is going to be successful in avoiding the types of lineups  and the chaos and some of the stuff we saw happening at the side of the county roads in and around the entrance to the park last year. We feel very confident it’s going to be successful but the details aren’t ready to be released just yet. Minister Yurek is going to be doing that in early April.”

Pointing to the County’s reliance on tourism as a key economic driver, Smith said his government is ensuring there are programs developed and in place to measure the issues that may arise due to a COVID depressed economy.

“We wanted to make sure was that we had programs available that were going to help these businesses survive this,” Smith explained. “There have been very, very dire reports saying that we could potentially lose 20 per cent or even more of the businesses in the province or across the country because of the ongoing global pandemic. We have developed a whole host of different programs that are going to meet the individual needs of businesses so its not a one size fits all approach, there has been a lot done by the Federal Government, we have now added a whole bunch of programs at the Provincial level and then the municipalities are trying to do what they can as well.”

While some pointed out the province hadn’t expanded its array of paid sick days in the 2021 budget, Smith pointed out the Government of Canada had taken the lead on this issue and the federal program offers up to four business weeks of sick days for Canadians.

“They started with 10 paid sick days and then we eventually had that expanded to 20 paid sick days which is really, really important for a lot of businesses in this area,” Fortunately Prince Edward and Hastings Counties haven’t been hit really hard by COVID-19 and we haven’t had to many businesses, if any, that were really shut down for any period of time, but we wanted to make sure at all levels of Government that we weren’t duplicating programs.”