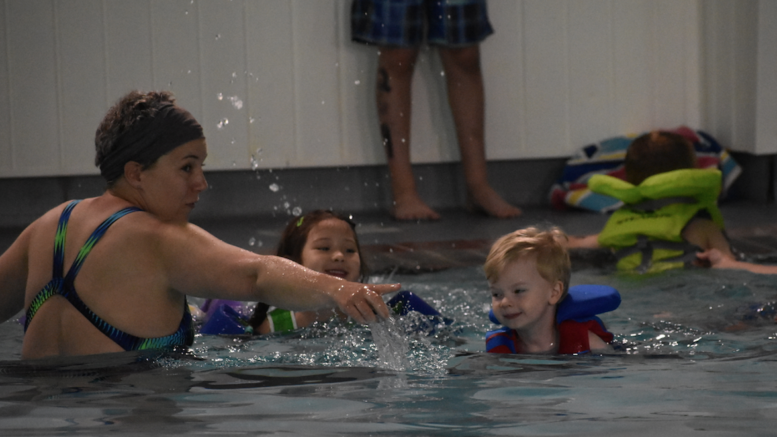 PADDLING ALONG Competitors in the 2019 Kids of Steel Triathlon get a helpful pointer during the swimming portion of the event held at PEFAC. Despite diminished usage due to the pandemic, the community supported pool and gym is in a good position financially. (Sarah Williams/Gazette file photo)

Despite lockdowns and limited capacity amidst the COVID pandemic, the Prince Edward Fitness and Aquatic Centre has gone above and beyond to provide services to County residents.

Sue Mathieu, PEFAC Board Member, told councillors at Thursday’s Committee of the Whole meeting membership and community support has been “fantastic” this year.

“Overall, the usage is way down and most of the programs have not operated for over a year, but we are holding our own financially thanks to the support of our members and the various government assistance programs available,” Mathieu said.

Prior to the pandemic hitting early last spring, she said PEFAC had their best year ever in 2019. She said it was lucky in that it left the organization in a good position to weather the storm that came shortly after COVID hit. The fitness centre was forced to close for three months following government guidelines, and fully re-opened in the fall with reduced capacity for all operations, she said.

“Since the Christmas lockdown, all parts of the facility are open but still at reduced capacity. Everything including using the weights and the cardio equipment is done by reservation. We have careful screening of users and extensive cleaning protocols. We have not been selling any day passes and have only recently been accepting new members just from within the County.”

Beginning last April, PEFAC staff gave members several options to keep their memberships, including monthly passes or the choice to suspend them. She said most individuals chose to continue to pay, which resulted in a revenue base of $12,000 to $15,000 per month.

“Many have taken advantage of our online classes. We have been offering four or five new classes every day, sometimes with 10 or more participation. Member reaction to our COVID protocols have been very positive and they are very pleased to be able to use these facilities,” Mathieu explained.

She also applauded PEFAC staff who she said have stepped up to the plate and handled all the additional work procedures and protocols, as well as extensive member communications, exceptionally well.

“It has been a ton of work with frequently changing guidelines, shutdowns and openings and the need to hire, train and supervise new staff,” she stated. “Management has been in regular contact with Hastings-Prince Edward Public Health who have provided guidance and have inspected our facilities.”

In fact, she said, the health inspector was so impressed, he asked to use the PEFAC facility as an example of “how to do it” for other local facilities in the region. Mathieu said they have taken full advantage of the provincial and federal assistance programs, particularly the wage assistance and rent rebates, and are still applying for any available grants and funding. To date, Mathieu said PEFAC has received over $315,000 in grants and are waiting to hear about another $10,000 to $20,000 from the Ontario Small Business Grant Program.

“While our building operating costs were reduced somewhat, we still had to keep the pool operational and the heat on so we have had some ongoing costs with the building and building maintenance,” she said.

PEFAC also recently signed a new 10-year lease, noting the building rental rate has been exactly the same for the past 16 years and is well below market rates. Mathieu said the municipality signed a 4-month contribution of $50,000 per year toward operational costs at the beginning of the council term, as well as $20,000 per year towards capital costs, which goes toward things like equipment.

At the end of PEFAC’s fiscal year in August 2020, they had operated for seven months of regular activity and five months consisted of daily reduced operation, with a net income of about $23,000.

“Our membership revenue is down about 20 per cent, maybe not as much as you might expect, but that reflects the continued support of our members. Our program revenue is down about 50 per cent since we did not run any summer camps last year and we have not been able to do swimming lessons or any of our other programs,” Mathieu said.

She said over the six months between September and February, there was a significant drop in earned revenue from memberships and programs – less than $100,000 in total. Earned revenue from the previous year, as a reference, was over $400,000. “However, in the past 6 months we have seen over $200,000 in provincial and federal grants and still more money is coming,” she explained.

Since re-opening in late February at the end of the most recent lockdown, Mathieu said membership revenues have started to increase and the facility has been quite busy in the face of limited capacity.

“Hopefully, if we are able to avoid another lockdown, this will continue and we will be able to start offering more programs, the summer programs and see increased use in the facility over the next few months,” she said. “Given the uncertainty of things right now, it is hard to say how the next few months will roll out. We are hoping to at least be able to run some programs and anticipate it will be at least September before our usage really starts to recover.

In the meantime, of course, we have to continue with enhanced cleaning, COVID screening and all the other protocols which means increased staffing levels. The continued support from the federal government and the wage subsidy program is going to be very important to us,” she continued.

The fitness centre is a not-for-profit organization, which she said is unique, as many other centres across Ontario and even Canada are typically owned and operated either by its municipality or local YMCA model. Coun. Mike Harper mentioned how many local businesses have had to rethink their business models in light of COVID, coming up with creative ways to offer services or make permanent shifts, and asked if PEFAC is considering the same.

Mathieu said it is difficult to create virtual services aside from certain Zoom fitness classes, because swimming classes rely on using the fitness pools and residents may not have access to equipment to join classes remotely. The presentation on the Annual Review for the Prince Edward Fitness and Aquatic Centre was carried.