The name of the opposing combatant and the stakes have been lost to the passage of time.

But Keith MacDonald vividly recalled the play as well as anyone else who might have stopped by to watch a softball game he was a part of that summer evening at the venerable Alemite diamond in the Friendly City.

The “Hard Rock from Down Under” as the late, great sports editor of the Ontario Intelligencer George Carver branded him, MacDonald was in full glory that night.

The heckling back and forth between the local darlings and the hoard of host hackers with their wooden clubs and leather mitts had reached a fever pitch.

The captain of the opposition and Prince Edward County’s dearest son had amplified the back-and-forth as the home side batted in the bottom half of the inning.

Manning first base, maybe MacDonald mentioned to the batter there was a new invention called soap and the opposing scrubs could try it out next time they left their hovels and travelled to civilization.

Maybe the virtue of all Prince Edward County maidens fair and true was insulted by the hairy-legged mercenary bent on crushing the softball dreams of the hometown faithful.

Whatever started the jaw fest, MacDonald soon found himself on the business end of an egregious encroachment as the ball yard went quiet with anticipation.

A bunt attempt up the third base line left the Picton’s first baseman in the batter’s sights as both moved towards the bag. A diamond dust up of epic proportions left the entire east side of Belleville shaking at the meeting of the irresistable force and the immovable object.

Fans who were there will tell you they had never seen such a play on a softball diamond.

Such was the collision and the ensuing uproar that when both players came to, they wound up wearing each other’s head gear for few innings while the cobwebs cleared.

“I didn’t forget about that play and a couple of games later, I’m on second base and he was playing third. I said ‘My friend, you are about to get a taste of old Keith here’,” Macdonald told this writer a few years ago.

Taking off with the pitch, MacDonald steamed towards third with nary a thought of advancing 60 feet in his mind as much as settling a score and making things square again.

Another incredible collision followed. The old timers that can remember such stories from an era when these types of tales mattered more still chuckle about that one.

That’s how Keith MacDonald lived his life, farmed and served his community in later years when he was a part of municipal and, for a time, provincial government. Full on. Straight ahead.

Always politicking. The councillor was always trying to get the best value and service for the taxpayer, always ready to answer a phone call and go shake the tree of a roads supervisor if the snowplow was late that morning.

Always working. When governance matters subsided, there was always a herd of beef cows for the farmer to check in on, an auction sale to attend or some agriculture task that needed to be addressed.

But in the quiet moments when the ground was still around MacDonald Farm, there was always time to spend with Eleanor and her grandchildren. The Lindsay and Ronan kids were the apple of Papa K’s eye and he was as proud of them as anything he ever accomplished on a diamond, a rink or at a council chamber.

The term legend gets passed around easily these days. But when it comes to man named Keith MacDonald who lived,worked and played in Prince Edward County, squeezing the most out of every moment and life experience he could, the label is accurate.

A one-of-a-kind figure that, like the stories that came as a result of his exploits from Athol Bay to Memorial Arena to Shire Hall, are never to be forgotten. 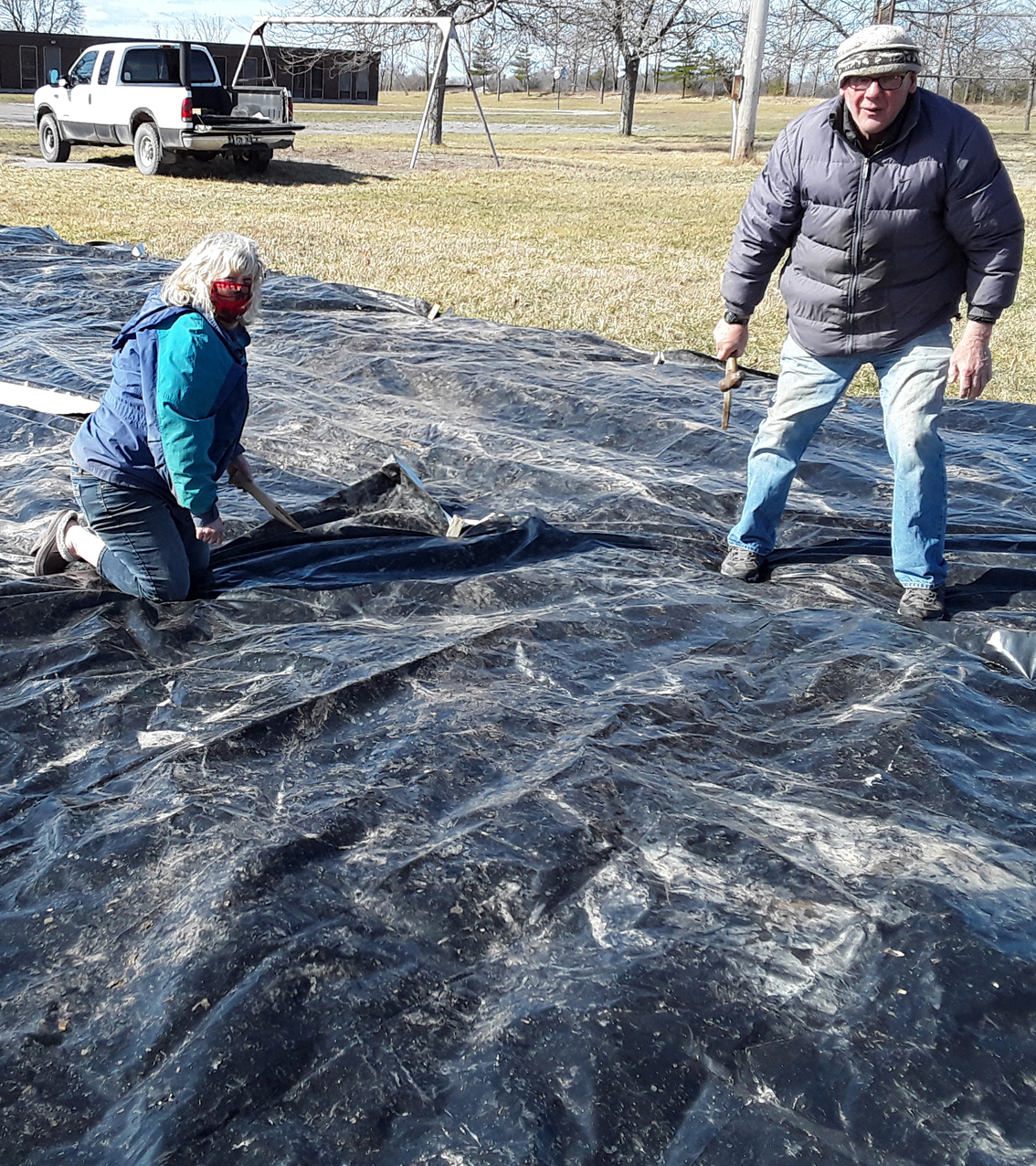 A GOLDEN EFFORT – LoveSong Seniors Housing and Community Hub volunteers Wendy Norton and Ken How prepare the first section of what’s being called “The Golden Mile”. A track around the perimeter of the property at 27 Corey Street in Bloomfield will include a mile-long pathway among trees and wildflowers, a community garden and pavilion. On Monday, the first step was taken in LoveSong’s journey as plastic has been placed to assist in preparing the soil for garden plots. These garden plots are open to the community and you can register for them by emailing drodgers70@bell.net. (Submitted Photo)