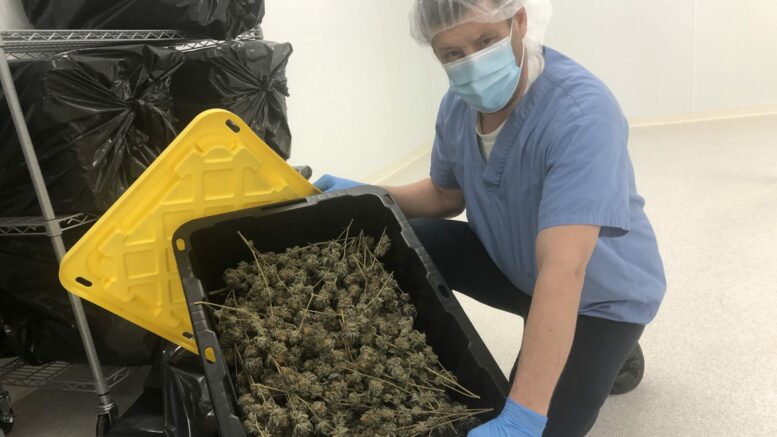 With a pair of dispensaries in downtown Picton, more proof Prince Edward County is going ‘Green’ is contained inside a rather nondescript, warehouse-looking facility along Loyalist Parkway just outside of Bloomfield.

The only giveaway something might be happening at Prince Edward County Growers (PECG) that isn’t part of normal, run-of-the-mill business activities is a secure perimeter that involves fencing and barbed wire

But lest any “Lookie Lous” want a glimpse or, more importantly, a whiff of ‘Legendary Larry’ or ‘Granola Funk’, they should point their attention elsewhere.

The County’s first and (so-far) only Health Canada-licensed, Canada Revenue Agency-monitored and completely secure recreational growing operation opened its doors just wide enough for this reporter to get a view of what 21st century cannabis production looks like in a province and country that permits legalized consumption. 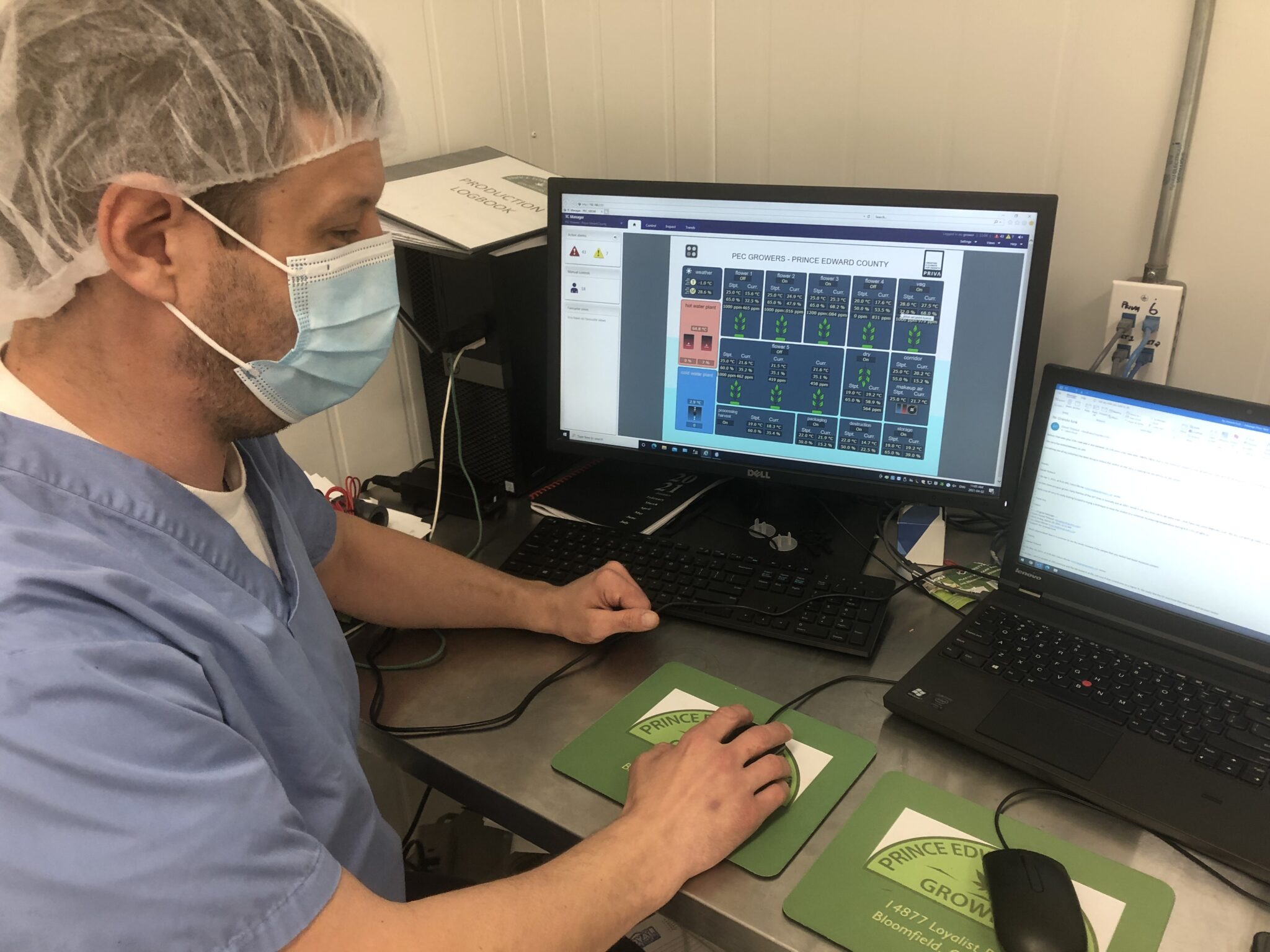 Irrigation and climate control at Prince Edward County Growers is automated and can be controlled from a central work station. (Jason Parks/Gazette Staff)

Calum McRae, the company’s master grower and production manager, provided an in-depth tour to the former MPI Drilling facility three km west of the village. After a total renovation to the facility that took many months, stepping inside PECG reveals a state-of-the-art and secure installation that features European watering and fertilizing automation, up-to-the-second temperature and humidity controls including an carbon monoxide enrichment mechanism that help the plants thrive and, most importantly to the public and its safety, a card lock and camera system. Every door in the facility must be unlocked by a magnetic card and there are 100 closed circuit cameras in every nook and corner of every room and hallway.

Consistent logging of employee’s  movements and video evidence of every activity in every room is available should Health Canada or the CRA choose to undertake an audit. And they do so at regular intervals as well as spot inspections to ensure every gram is traced and all finished product as well as  byproduct materials are properly logged and processed or disposed of.

Not a leaf or a bud or a stem leaves Prince Edward County Growers that isn’t monitored and logged in some way, shape or form.

“Security is very involved in everything we do here and the OPP work very closely with us,” McRae told the Gazette Friday “We’ve also successfully passed all of our audits and CRA is been very diligent with their site visits and audits. Obviously they are concerned with the excise tax and they are always following the money. When you add the provincial and federal taxes together, it works out to a dollar a gram. We pay all our taxes and fees and while there might still be some stigma surrounding cannabis, this is a business just like any other legal business.”

Currently, Prince Edward County Growers are producing a pair of different strains for Ottawa-based Apollo Green as growing operations ramp up locally. McRae explained the business plan calls for PECG to work with  certain varietals from a fellow licensed producer and grow those strains of cannabis in bulk for the next 6-8 months.

Eventually, PECG will have their own genetics that will be marketed with their brand name and the various varieties on the unique packaging.

With a couple of batches successfully grown, dried and bulk packaged, early returns from the grow rooms at PECG are looking incredibly promising.

McRae said the bench marks for Granola Funk are 2.5 terpenes and 20 per cent tetrahydrocannabinol (THC) whereas recent laboratory results indicate PECG has been able to reach 3.6 terpenes and 24 per cent in the first batch produced at the local growing rooms.

“Apollo Green are quite impressed with the results we’ve been able to create here so far and they want to get this on the market as soon as possible. Overall, I’ve really been happy with how everything has come out so far in terms of quality and yield and we are only into growing our third and fourth batches so really, the sky is the limit for us at this stage,” McRae said, adding that once production staff have been hired and PECG is running at peak production levels, the operation will send an average of s 70 kg carefully grown craft cannabis per month to the Canadian marketplace.

Based on those numbers, excise taxes alone from PECG will net federal and provincial governments $840,000 annually. 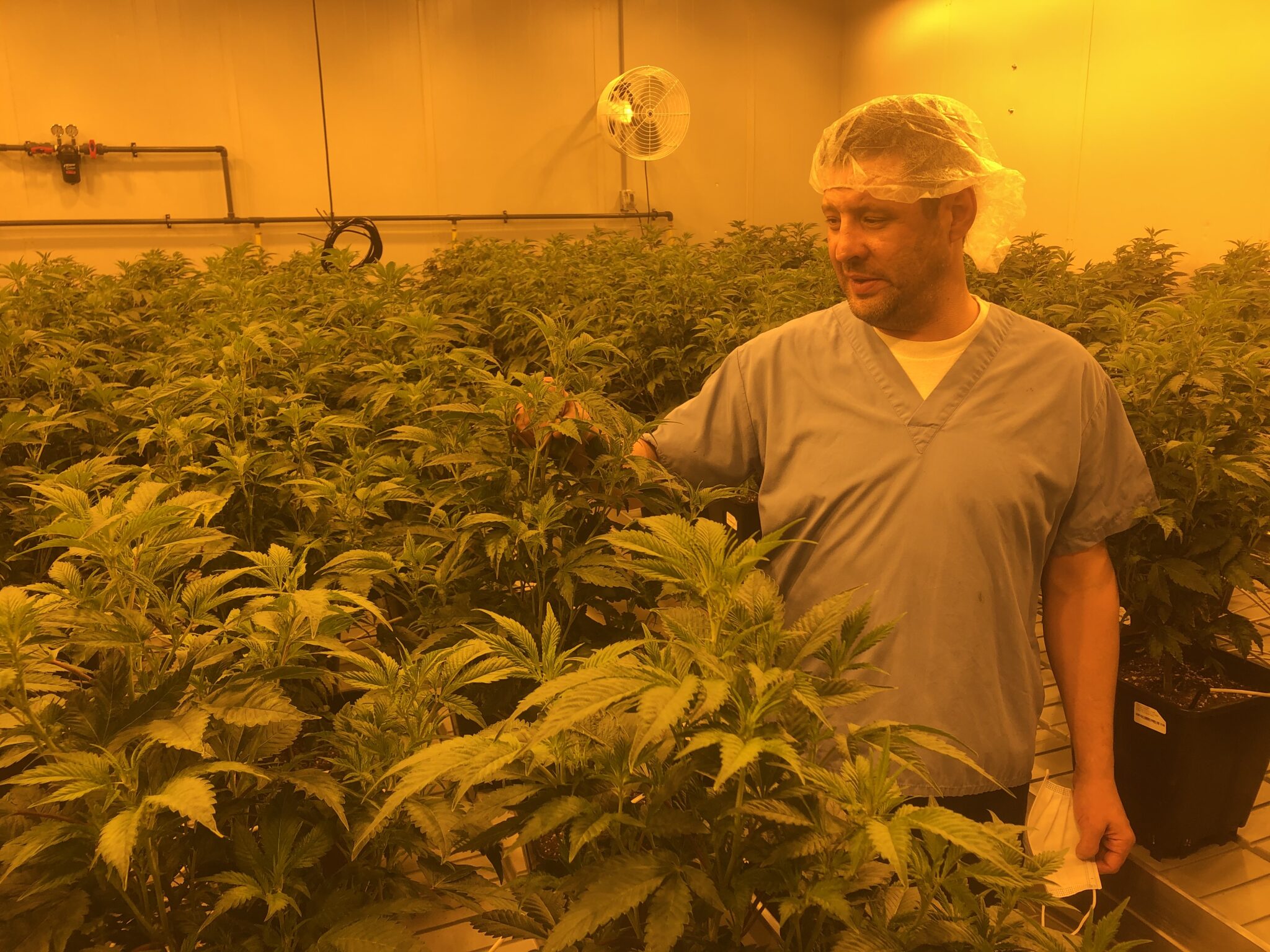 Calum McRae with the next batch of recreational cannabis that will be produced at Prince Edward County Growers. (Jason Parks/Gazette Staff)

Over the coming months, McRae expects PECG to start to hire production staff and are looking at the Loyalist College cannabis program for possible production candidates. It’s also expected once ramp up is complete and the facility is running full steam ahead, the employee compliment will double from its current handful to ten.

“We will eventually get to the point where we have our own carefully crafted genetics, we will offer those to purchase to other licensed producers,” McRae explained.

Royal OG, County Quicksand, Sandbanks Sunrise and Sunset are some marketing names of potential PECG varietals that being are thrown around but the grower stresses that in the fine print the company will be very clear with regards to genetics so “the really conscious consumer can see exactly where this product is coming from.”

During the time of transition, McRae, a County resident for the last decade or so, has been wearing many hats at the facility and, just like a fledgling winemaker would at a up-and-coming vineyard, the grower have been tasked to do a little bit of everything in the early going.

“I’ve been doing cultivation, sanitation, processing and even dabbling a bit in marketing and facility maintenance,” McRae laughed.

PECG is currently using two smaller grow rooms but McRae is anxious to commence cultivation in the new 1,800 sq. ft grow room that features 96,000 watts of high pressure sodium fuelled illumination at 1,000 watts per tube where 800 plants will eventually flower and bloom their precious and prized buds.

But even at that size and scope, PECG wants to remain true to its mission.

“We aim to grow craft cannabis so having the highest quality and maintaining that level of quality throughout the entire process is vitally important. We’ve developed our own procedures to keep the handling at a minimum and ensure the environmental conditions are controlled throughout the entire process,” McRae said as he carefully showed off 20 kg of Granola Funk ready to be shipped to market in a humidity controlled vault that holds finished product.

The finished product in the vault is kept at 70 per cent humidity which helps against degradation and assists in keeping the terpenes- the compounds which provide the taste and smell for cannabis- in tact.

Another key in the process being developed by PECG is irrigation. Typically, large scale commercial growers use a reverse osmosis process to make water completely neutral before adding fertilizers and nutrients to assist in the growth process.

McRae said in an effort to develop their own “flavour and consistency’ in a craft process, PECG is using artesian limestone well water which imparts a certain terror element to the flower and provides a “unique growing environment with unique genetics which we hope will be desirable to the high end and educated cannabis consumer.”

In hopes of being able to have a better handle on quality control and putting his own stamp on the product produced on site, McRae said PECG is applying for Health Canada research and development licence that would allow for cannabis inhalation on site.

“Cannabis sommelier is a real thing- the different flavours are cannabis are more prevalent than in wine and  their sophisticated palette can differentiate between things like the type of water and nutrients,” McRae added. “That will help us ensure we are staying true to our goal.”