In these, the very dog days of the COVID-19 pandemic, predicting the moves and measures of the provincial government has very much become a game of darts.

Occasionally-and with lessening frequency- those making the shots from the oche of the Ontario Legislature are on target.

But more often than not, the province is throwing far more bounce outs than bullseyes. As a province, we are well behind where we could and should be in terms of vaccinating the provincial populace to a point where critical mass could have formed some kind of barrier or at least a toe hold in the fight against the coronavirus and the Variants of Concern.

Yes the federal government can share in some of the blame for the roll out and ramp up of vaccination programs due to lags in procurement but at some point, the rubber needs to hit the road and right now, Premier Doug Ford has the vaccination vehicle idling in near neutral while the third wave of the COVID-19 pandemic appears ready to swamp us all. What could Premier Ford do in the coming days to ensure the safety of Ontarians?

For starters, he could direct Dr. Homer Tien, the incoming operational lead of the province’s COVID-19 distribution taskforce that was formerly under the leadership of retired general Rick Hillier to examine the possibility and potentially develop a plan where Ontario’s educators and school staff members such as custodians, educational assistants and clerical staff are treated the same as front line healthcare workers and offer them expedited vaccination opportunities.

Epidemiology wasn’t on the course list at Loyalist College when your humble scribe was tending to post-secondary studies at the end of the previous century so we aren’t able to line up at the debate dias opposite people like Ontario’s Medical Officer of Health Dr. David Williams. But it sure seems like if Ontario’s latest lock down wasn’t just half measures, schools would have stayed closed after the Easter long weekend.

Even as of this writing, Public Health agencies in Peel and Toronto played their trump cards and closed schools under Section 22 of the of the Health Protection and Promotion Act as a case loads and VOC’s keep ratcheting up day after day. So if Ford and Minister of Education Stephen Leece want to continue to propagate this idea Ontario’s classrooms are somehow COVID safe (By the way, in direct opposition to the parameters-low density, better ventilation- that were laid out to them prior to the start of the school year by trained health officials) they could back that claim up with some action.

Canada’s oldest community newspaper joins in with parents, education workers, their unions, opposition members of the Ontario legislature and just about anyone else eyeing COVID-19 infection rates nervously for the province to get needles in the arms of the people tasked with teaching and fostering the province’s most precious resource. Use next week’s break in studies to commence a crash vaccination program.

Instead of half measures and lip service, take aim at the arms of teachers and education staffers and hit this important target that will help preserve the health of our children and those who care and nurture them. 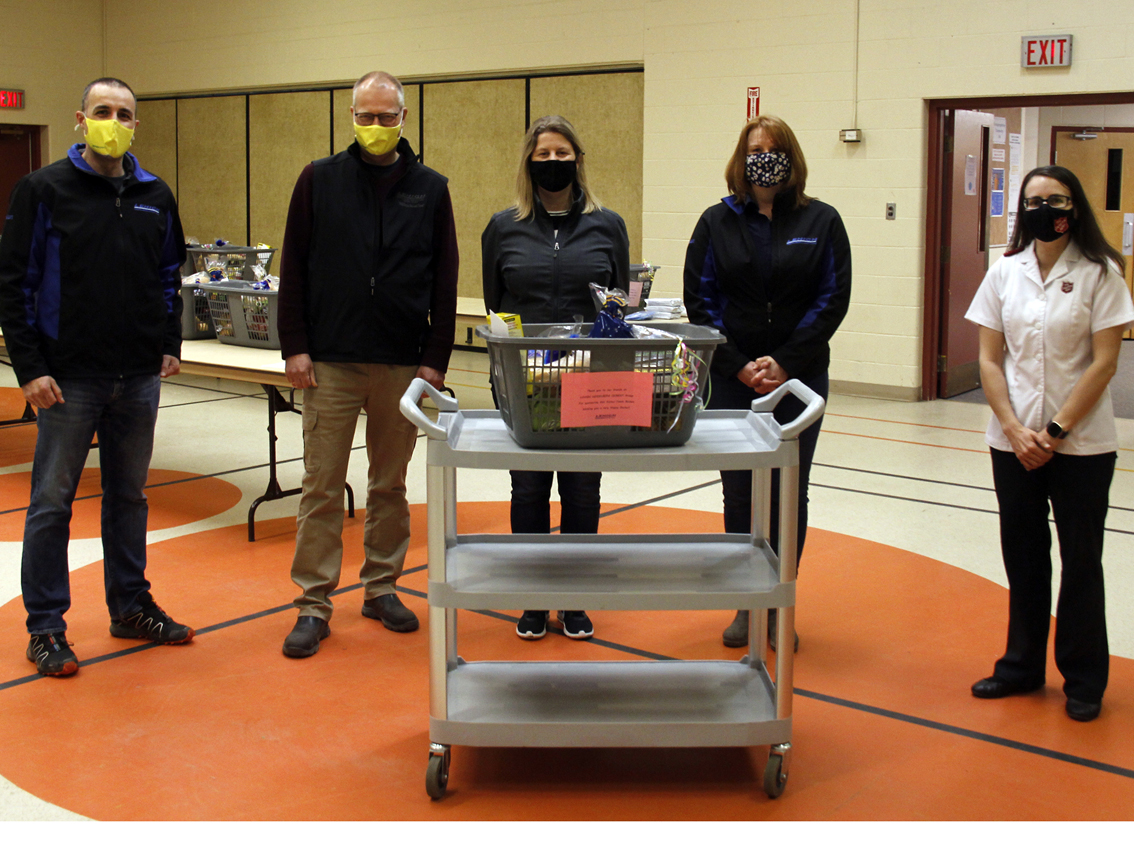 EASTER GIFTS FOR THE COMMUNITY – Picton’s Lehigh Cement Group sponsored 50 Salvation Army Easter Gift Hampers that were distributed amongst local families prior to the holiday. In total, the local business funded $3,000 worth of food and gift cards. “Lehigh Cement Plant contacted us and wanted to help out in the community,” expressed (At right) Lieutenant Donna Ludlow from Picton’s Salvation Army. “They came up with this idea and we were very grateful to have this opportunity.” The baskets were distributed Thursday, April 1. Representing Lehigh (from left) are Nick Papinicolaou, Carsten Schrader, Darcy-Lynn Jeffery and Melissa Eaton. (Desirée Decoste/Gazette Staff)