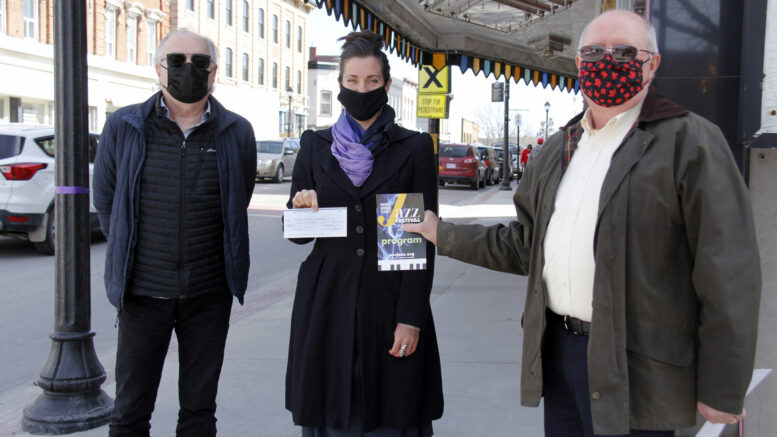 The Prince Edward County Jazz Festival (PECJF) Board of Directors are supporting the raising of the Regent’s curtain.

The PECJF announced Tuesday they are making a $1,000 contribution to the Regent’s “Raise the Curtain” campaign and also mentioned the Festival’s plans for 2021.

In approving the contribution, the PECJF’s organizing committee says it wants to support the Regent’s role in promoting art locally.

For two decades the Festival has presented Grammy and Juno winners at the historic Regent.

“It’s been a wonderful artist and audience-friendly venue,” added Puddy. “We need the Regent to keep the performing arts bubbling in Picton and PEC, and the Festival wants to play its part in keeping the theatre on a secure financial footing. And what were also hoping is that, we are the only performing festival that has made any donation at all to the “Raise the Curtain” campaign so we would like to put a little bit of a challenge out. Other folks that have performed at the Regent Theatre over the past 100 years, that they contribute no matter how small.”

Meanwhile, pandemic-era planning is proceeding for the 21st annual jazz fest in 2021.

“We think that no matter what happens there will be the opportunity to have some music,” said Brian Barlow, PECJF creative director. “We are not going to do anything indoors so we unfortunately won’t be doing something at the Regent, Which is why we thought it would be nice to contribute to the theatre. But there will be music outdoors and there will be a Jazz Festival presence this summer. We’ll be doing things, things will be in accordance with the rules and regulations and we’ll just be probably having some pop-up things because that makes it a lot easier to do it in that way. So that’s all we can really do right now but music goes on.”

One sure COVID casualty of the Festival’s annual program will be this spring’s Jazz Education Program big band concert, usually held at the Regent in late March.

It’s being deferred until next year.