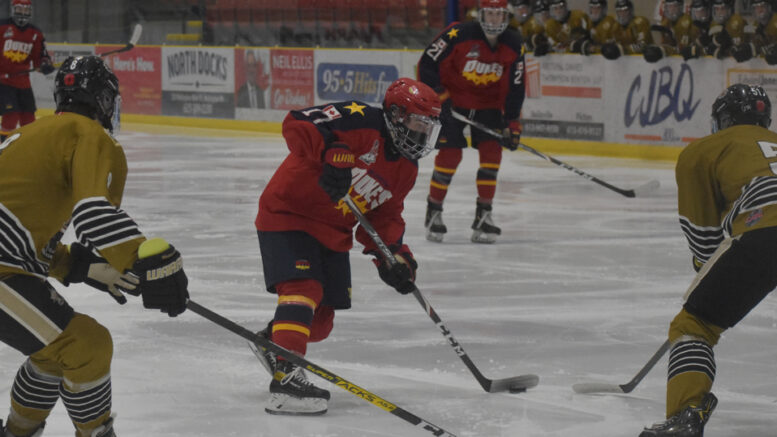 IN A SNAP Wellington Dukes forward Tyler Ignazzitto tries a shot attempt against the visiting Trenton Golden Hawks during Game Four of the Spring Development Series. The Bath native had two goals and an assist on the series clinching goal for Wellington in his final two games. (Jason Parks/Gazette Staff)

A clinching goal that sealed a series victory against the arch rivals from Trenton.

A mob scene of hugs and victory yelps when the clock at Lehigh Arena hit zero.

In different times, these factors would be another link in the chain of excellence the Wellington Dukes organization has strived to craft over the last three decades.

Instead, those scenes were much more muted despite the parameters surrounding them and the Spring Development Series will likely wind up a forgotten footnote in a 2020-21 hockey season that never really was.

The Dukes wrapped up their eight game set with their Golden Hawks last week and took the exhibition five games to three and, in the process, were able to give their graduating players a silver lining on a dark season while also providing quality minutes to players that should factor into the success of the Ontario Junior Hockey League club next season.

Dukes Head Coach Derek Smith agreed it was best to put the campaign (or lack thereof) behind the squad and use the data for next season’s planning.

“In this second series, we really wanted make the most of the games and we really tried to roll lines and give everyone a fair share so we could take stock in what we have coming back next season,” Smith told the Gazette.

After surrendering a 2-0 series lead, Wellington allowed the Golden Hawks to push ahead with a wild 6-5 setback in Game Five on Wednesday, March 24. The Dukes took a 3-1 lead to the first intermission thanks to goals by James White, Ben Hamilton and Mason Reeves. But the Hawks came roaring back in the second with four goals of their own that sandwiched a Ben Addison tally and the Dukes were behind 5-4 after 40.

Wellington net minder Ethan Morrow and his counterpart in the Trenton net Joe Ranger shored up their play in the third with neither team bulging twine over the first 19 minutes of play. With Morrow lifted for an extra attacker, Matteo Disipio was able to put the puck into a vacated Dukes cage with 50 seconds left to provide the Golden Hawks a measure of insurance that would come in handy as Reeves potted his second of the contest with 20 seconds left to bring Wellington back to within a goal.

Frustration at the end of Game Five made for motivation in Game Six as the series moved back to Wellington on Friday, March 26 and even though Wellington would spend most of the contest two goals down, the locals emerged on top in overtime. Trenton broke the ice in the first when a pass attempt from the Wellington zone was intercepted at mid ice and a 2-on-1 rush developed. Golden Hawk Jake Laville would make a bank pass off the right pad of Wellington starter Dan Botelho to Ryan Glazer who had all day and oceans of space to deposit a loose puck into the Wellington net for a 1-0 margin.

Trenton doubled that lead just over a minute later when some lackadaisical play in the Dukes end by the defence allowed Joel Chauvin to make a slot pass to Sam Williamson who beat Botelho low to the stick side at 15:29 of the first. Wellington would outshoot the visitors 14-4 in the second but were unable to solve William Nguyen through 40 minutes.

Finally, a Wellington rookie got the locals on the board early in the third.

Quinte AAA grad Cooper Matthews took a Cole McGuire pass while circling the top of the circles and snapped a wrist shot from 30 feet out past Nguyen’s blocker 4:35 into the final frame to cut the Wellington deficit in half.

Later in the third, it was Matthews again giving Dukes brass of glimpse of what might be next season.

Playing give and go with Reeves, Matthews motored to the slot, took the pass and went backhand-forehand to freeze Nguyen and square the affair 2-2 at the 11:35 mark. 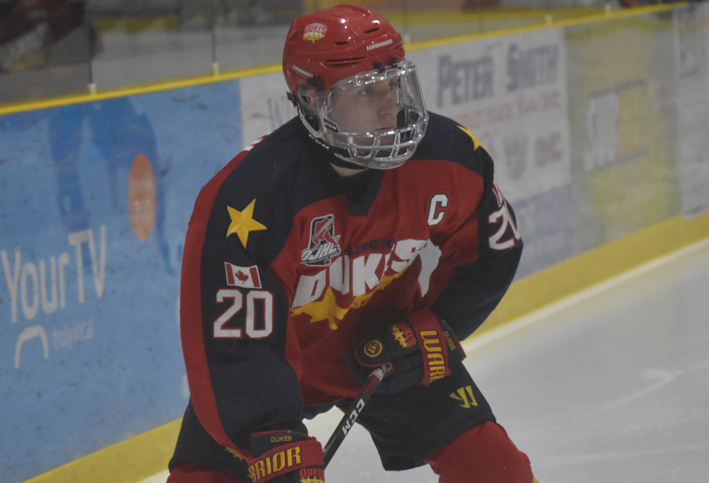 Both teams would fail to pull ahead in the remaining 8:25, forcing overtime. In the extra session, Matthews remained scalding for the Dukes. The Belleville native did some nice work in the defensive zone before springing veteran Jacob Vreugdenhil on a rush where his fleetness cause a stumble by a checking Golden Hawk defender.

In alone on Nguyen, Vreugdenhil picked the five hole for the game winner at the 41 second mark to get Wellington back to even in the series.

In Game Seven on Monday, the Dukes were able to get their stride going earlier and cruised to a 4-1 win Wellington’s White would make a nifty back hand pass below the goal line to a lurking Tyler Ignazzitto as the spark plug beat Ranger to the high glove side at 11:56.

Matthews continued his torrid pace with his third goal in two games later in the frame.

Colton Kitchen’s point blast was kicked away nicely by Ranger however Matthews was stationed in just the right spot to hammer the rebound like a one time pass into the open Trenton goal for Wellington’s second tally of the opening period.

The score stayed at 2-0 through two with the home side extending their lead 65 seconds into the third. Aaron Brown’s knuckle ball from the blue line beat Ranger to the short side to move Wellington’s lead to a field goal. The Golden Hawks finally solved Eli Shiller as Nathan Oickle’s snap shot from the high slot snuck betwixt the wickets and into the Wellington net at 5:02 to make it 3-1 and gave the visitors some lift.

But in the late going of Game Seven, it was the player who opened the scoring that closed it.

After a lengthy stay in the Trenton zone, Ignazzitto would snap a loose puck along the ice and past Ranger with two and half minutes left in the contest to make it a 4-1 final. The game was originally scheduled to take place in Trenton however a COVID-19 vaccination clinic forced the Municipality of Quinte West to remove the ice from the Duncan MacDonald Memorial Gardens. On Wednesday in Game Eight, a regulation win for Trenton was the only way for the Golden Hawks to extend the series.

A regulation point for Wellington clinched even if the visitors were able to beat the Dukes in overtime. Nguyen and Morrow were outstanding in net as the game was scoreless through to the 57th minute. With a minute and a half left in the game, Trenton chose to go with an extra attacker to force the issue. Wellington remained firm and Ignazzitto fired a high clearing attempt off the glass to relieve the pressure. The puck trickled towards the Trenton goal line and wound up bouncing of the post and lying inches from the vacated Golden Hawk net.

A swooping White was able to out pace his check and managed to sweep the puck into the net with a backhand that sealed the series for Wellington.

“It’s always good to win and the way we clinched it was fitting,” Smith said. “To have White and Ignazzitto combine to ice the series was as perfect as they could have this year.Their leadership along with Evan Miller and Addison was top notch all year. They really showed the younger players how to use the time to get better everyday and that really helped development.”

A three year Duke, Smith said Addison took on the role of team captain seriously despite not much of a regular schedule.

“We had big plans this year and they all figured in prominently,” Smith said. “It’s a real shame because Addy’s development just kept getting month after month and you could just tell he was going to be one of those guys that would benefit massively from an extended playoff run where the NCAA scouts get a really good look in high leverage games.”

In terms of next season, Smith liked what Shiller, Botehlo and Morrow showed this season.

“All three goalies have eligibility and we’ve got a great problem heading into next season with options,” the coach added.

Up front, Smith noted Barrett Joynt blossomed well this season and was able to better match his intensity and energy with a polished skill set. “We really liked the chemistry he had with Jax Dubois and Cameron Korsurko,” Smith added. Obviously Matthews looks every part the future game breaker so far but he may wind up entertaining his OHL future with the Barrie Colts next season.

“They both really took a step forward and we are hopeful to see them back in camp and ready to keep developing,” Smith added.