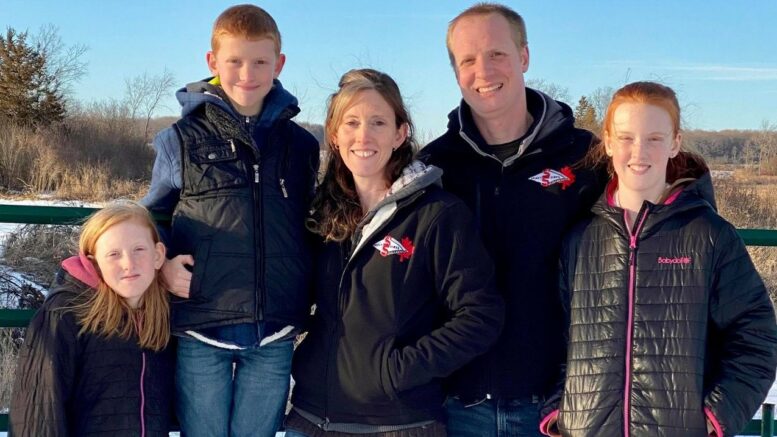 Jasen and Doreen Kuipers with their children (From left) Courtney, Jayden and Meaghan. The Kuipers family and their Kuipercrest Holstein dairy operation were awarded a Holstein Canada Master Breeder Shield award for 2020. (Submitted Photo)

For just the second time in its collective agriculture history, a Prince Edward County dairy operation has been recognized under Holstein Canada’s Master Breeder Shield program.

Jasen and Doreen Kuipers of Kuipercrest Holstiens just west of Bloomfield were announced as part of the 91st class of what is regarded as dairying’s highest honour.

Since its beginning in 1929, the Master Breeder program has become the most coveted Holstein Canada award. Including this year’s winners, more than 1,100 Master Breeder shields have been handed out since 1930 (for the year 1929). The only other local farm to be awarded a Master Breeder shield previously was Walt and Val Miller of Ourown Farm in Hiller. The winners of this award are selected out of all the eligible dairy herds from across Canada.

Due to the COVID-19 pandemic, Holstein Canada revealed the winners live to the entire Holstein community in an online event. This livestream was seen by more than 1,200 viewers from all over the world.

“We recognize these breeders for having mastered the art of breeding balanced cattle – high production and outstanding conformation with great reproduction, health and longevity,” said Holstein Canada in a statement.  “We will be celebrating this year’s recipients at the National Holstein Convention Master Breeder Gala in Ottawa, Ontario on Saturday, July 10, 2021. We will also be honouring the 2019 Master Breeders at a special Gala Thursday, July 8, 2021.”

It’s been a meteoric rise in the dairy world for the Kuipers family and the evidence is vaunted Master Breeder award in Jasen’s 15th year of dairying. To earn the title of  Master Breeder, herdsperson earns points for milk production as well as longevity and the confirmation of the dairy cow. A long game,  points must be earned in 14 out of 16 years, and given its taken the Kuipers just a decade and a half, it seems as though future Holstein Canada Shields will be in offing.

Jasen received his start in the dairy industry close to the Kuipercrest home farm, becoming a herdsperson at neighbouring Parksdale Farms at the age of 16. Yearning to build his own holstein herd, Kuipers was able to do embryo transplants from some of Parksdale’s best pedigree cows. When Ken and Steve Parks exited the diary business and sold their milking quota, Jasen bought the quality cows and brought them back to his father’s home farm, combining the best of the two herds and giving him a boost upon entering the diary industry for himself.

“We received the preliminary Master Breeder results in October 2020 and knew we were in the top 10 for our group but didn’t know where in those ten we were ranked,” Jasen told the Gazette.  “Usually, by the beginning of January you receive a phone call if you’ve gotten the award.  We didn’t get a phone call so were thinking we weren’t going to be part of the 91st class and we were pretty disappointed. But then a week later we received an online invite to the unveiling of the Master Breeder 2020 Awards.”

Doreen added that when the night of the unveiling came the family prepared themselves not get our hopes up.

“As we were watching the livestream of each farm who received their shield, there was real excitement building, and when we saw ourselves on the screen and heard our name announced it was almost surreal,” Doreen said.  “We couldn’t believe we had actually gotten our Master Breeders Shield.”

The Kuipers milk 55 animals three times daily and their future plans include to continually “improve their herd, keep doing the best job we can, and to work towards our next shield.”