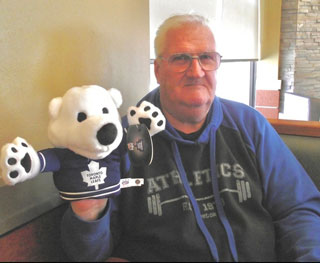 It is with broken hearts that we announce the passing of Roger Wayne Ferguson on Tuesday, April 6th, 2021. Roger passed away peacefully at the Madoc Hospice where he succumbed to his bout with kidney cancer. He lost one kidney to cancer some 19 years ago as well. Roger was in his 75th year. Lovingly remembered by his family: his daughters Karen, Sara; and son Brent, niece Dona-Lee, the grandchildren and his brothers Robert and Jerry and an uncle to many. Roger spent his whole life in the Quinte area where he was known as the Cardboard King in the recycling business. Roger enjoyed his retirement years with outdoor activities such as fishing, camping, road trips, snowmobiling and cross-country adventures with his four-wheeler. Roger will be severely missed by his family and circle of friends, but our memories will bring us a smile. Roger had a big heart. Roger is resting at the Whattam-Hicks Funeral Home, 33 Main Street West, Picton (613-476-2450). Roger will be laid to rest at the Cherry Valley Cemetery with his mom (Dorothy) and father (Ross). Roger has been cremated and A Memorial Service will be held at a later date due to covid-19 restrictions. Contributions in his name for Cancer or Hospice services would be much appreciated.