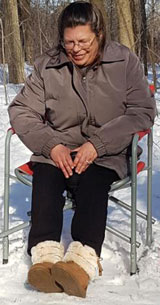 Janet Mary Richardson (nee Fennell)
June 20, 1958 – April 17, 2021
It is with heavy hearts we announce the sudden passing of Janet, partner to Donald Gyde, mother to Leslie & Paul (Darlene) Richardson, grandmother to Julian & Jordan of Kingston. Sister to Patti (Mike) Greveling (Fennell), aunt to Anthony (Erin) Nanaimo & Deidre Taylor (Justin) of Barrier BC and many cousins in and around Prince Edward County. Stepmom to Donna, Jonathan (Angie), Ashley (Todd) and StepGramma to Damien, Jaxon and Kaylee. Janet was predeceased by her husband Craig Richardson, parents Doug & Mildred Fennell (Seeley), grandparents Norman & Ida Fennell and Joe & Jessie Seeley. Janet was born and raised in Cherry Valley, after graduation from PECI she moved to Toronto where she married Craig Richardson and worked for Bell Canada for a number of years. In 1989 she moved to Nanaimo, BC to be with family, and this is where she completed her post education in Child Protection Worker at Malaspina College. In 1999 she made another move – back to Prince Edward County and was employed by Children Aid Society as a Child Protection Worker. During these years with CAS she was greatly respected and loved by the families and their children she help to raise. Janet made another big move in 2015 with her partner Donald Gyde to Grand Prairie, Alberta where she worked for a few years eventually returning to to Kingston, Ontario in 2018. Janet believed strongly in family – she loved her children and grandchildren with a fierce devotion. We will miss her quick laugh and sense of humor and her love for our family. Rest in peace Janet, we love you.