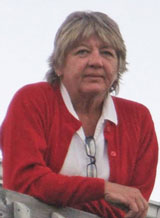 Peacefully entered into rest on Tuesday, April 20, 2021. Debra Vader (nee Millark) of Cherry Valley died at the age of 67. She was the daughter of the late Maurice & Jean Millark (nee Hoye) and wife of the late Jeffery Vader. Debra was the much-loved mother of Jesse Vader (Allison) of Canal Flats, BC. She was the grandmother of Clayton.  Debra was the sister of Lynn Harvey (Mac) and Joseph Millark. She will be dearly missed by family and friends. Mrs. Vader is resting at the Whattam-Hicks Funeral Home, 33 Main Street West, Picton (613-476-2450). Cremation has taken place. If desired, donations in Debra’s memory can be made to the Loyalist Humane Society (by cheque only) or the Prince Edward County Memorial Hospital Foundation would be appreciated by the family. Online condolences and to share memories can be made at: www.rushnellfamilyservices.com