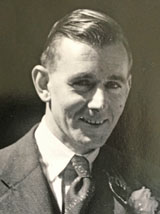 Robert Sutherland Henderson
November 4, 1917 – May 2, 2021
Formerly of Scotland and Toronto, Robert (Bob) entered into rest peacefully on Sunday May 2 at Quinte Gardens at the age of 103. Cherished father of Gail Henderson (Chris). Loving grandfather to Erynn Ahern and Andrew Ahern (Leila) and great grandfather to Sawyer, Escher, Alice and Angus. Predeceased by his brother Bunny Henderson and sister Betty Hogg . Born is Culross, Scotland, Robert (Bob) emigrated to Toronto, with his late wife Joan, in 1954. There he worked as a Master Gardener until his retirement. In 2009 Robert and Joan moved to PEC to make their home at The Carriage House in Cherry Valley . Here they quickly made friends with Jenny and Jim Prout and Dawn Nelson all of whom played a special part in Robert’s life. The family would like to thank all of the many caregivers that took good care of Robert over the last few years. A special thank you to Richard Diamond, the staff and residents of the Carriage House for all of their care and friendship. A celebration of life will be announced and celebrated at a later date. If desired, donations can be made to the PEC Hospital Memorial Foundation or The Loyalist Humane Society. Arrangements entrusted to Turner and Porter (Toronto). “
Keep right on to the end of the road”