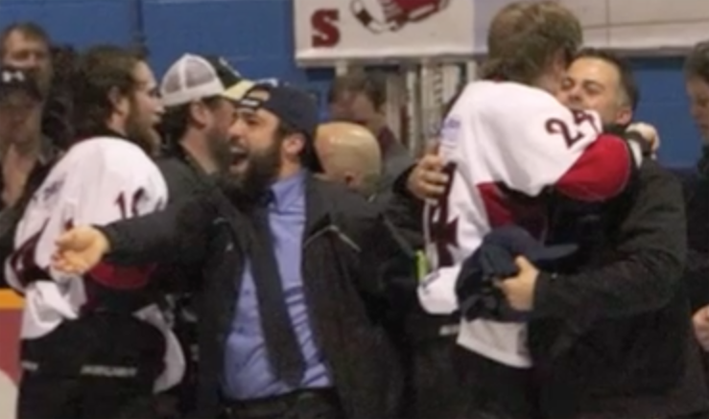 A recurring theme seems to be emergening with the Picton Pirates as the Provincial Junior Hockey League entry retools for the upcoming season.

As a player Hawkins Schulz is better known for suiting up for the Wellington Dukes of the Ontario Junior Hockey League for three seasons however the diminutive spark plug also managed to suit up for the Pirates for three games in 2010 as part of a conditioning stint.

The former West Lake resident who now works for the City of Belleville is also familiar with the Pirates bench area as he was an assistant coach under then-Coach and GM Ryan Woodward in 2013 when the club earned its first Schmalz Cup title, defeating the Essex 73’s in five games to capture the Ontario title.

“I guess we are getting the band back together,” Parks said with a laugh. “Knowing Hawk was available and interested in coming back to Picton this time in a head coaching role, he was my first choice and the organization is so happy to welcome him back.”

While he’s had experience on several benches at several levels including the OJHL and Eastern Triple AAA, this role will mark Hawkins Schulz’s first as Head Coach.

“When it comes to this level of Junior Hockey, I’ve always been a big believer in development and offering people the tools to grow, get better and, if they desire, take a next step. Hawk is ready for that opportunity to be a head coach and I know he is just as excited as I am for the upcoming season and what lays in store.”

Hawkins Schulz said he was thankful for the opportunity and ready to get prepared for the upcoming season.

“I’m very familiar with the leadership group on this team, having worked with players like team captain Devin Morrison in the past and when you look at what we have for a roster right now, we have some very good pieces,” Hawkins Schulz said. “I know Parksy is committed to building a championship calibre team for Picton again and there’s a lot to be excited about.”

Hawkins Schulz will continue to fill out his staff in the coming months and has started discussions with a number of candidates.

“I know in speaking to Kyle at length, there is definite interest in reaching out to former Pirates players from that 2013 era and seeing if the right candidate would like to serve as a second assistant,” Parks added.

In other PJHL news, the Gananoque Islanders franchise has ceased operations, plucking a team from the Tod Division-for now. “I don’t think too many members of the team are going to miss that road trip to Gan,” quipped Parks. “But on the flip side, it might mean some juggling in the Orr division and we could wind up absorbing a club from that part of Central Ontario if no other PJHL entry in our geographic area emerges.”