Generally speaking when May’s Victoria Day weekend rolls around, thoughts of the final day of school begin to creep into the minds of students and teachers.

This year however it’s anyone’s guess whether or not students will be singing the classic line of ‘when the teacher rings that bell, drop your books and run like (heck).’ In the meantime educators, students and parents are left without any direction as to what to expect over the final five weeks of the school year.

That’s because as of this writing, on May 24, the Ontario government hasn’t given any indication one way or another as to where the final day of school will take place. In his most recent re-opening the province plan, Premier Doug Ford was non-committal as to what will happen with schools on June 2.

Though he didn’t really say whether he was leaning one way or another in terms re-opening schools to in-person learning, he did cite modeling that showed COVID-19 cases could jump by 11 per cent if schools were to re-open on June 2 when the current stay-at-home order is set to expire. Those same projections say the jump could be as small as six per cent. If the high-end projection were accurate, that would be a rather hefty jump at a time when the province is finally showing signs of tamping down the third wave. With no plans to vaccinate kids age 12-17 until mid June, it’s safe to assume the vast majority of students would return without any COVID-19 shot. On the flip of side of that however, at least in the KFLA region, transmission of the virus within the school setting has been low and the comparison to classroom transmission rates in the Quinte is even more favourable.

While tracing tranmission of COVID-19 can sometimes be boiled down to sheer luck, the overwhelming portion of those “good numbers” can be attributed to the hard work of educators and custodial staff who enforce the rules and dutifully sanitize the classrooms. There’s also the matter of just how much of a jump is tolerable should in-person classes resume.

When it comes to lifting restrictions, it would be unreasonable to expect numbers will continue their steady decline-otherwise what was the point of the lockdown if it wasn’t contributing to the decline? In that sense it becomes a matter of just how much of an increase is deemed acceptable enough to restart the economy. With five weeks left in the school year, the easiest thing to do would be to simply stay the course and finish out the year through virtual learning.

But easiest isn’t always best. In an open letter to the province the Canadian Paediatric Society stressed the importance of having kids in a classroom. The letter cited the detrimental impacts to social isolation on the health and well being of students as a major drawback to online learning. Each grade is unique but from personal experience as a father of a four-year-old, Junior Kindergarten just doesn’t translate the same through a computer screen. And that’s through no fault of the teachers who have been forced to adapt on the fly, doing their best to make the most of the school year with very little in the way of prep time.

For many working parents just knowing whether or not their kids will be headed back to school would be a huge help-even if it’s not the answer they want to hear. One way or another however, the province needs to decide what the final month of school is going to look like.

Adam Prudhomme is Managing Editor of the Napanee Beaver 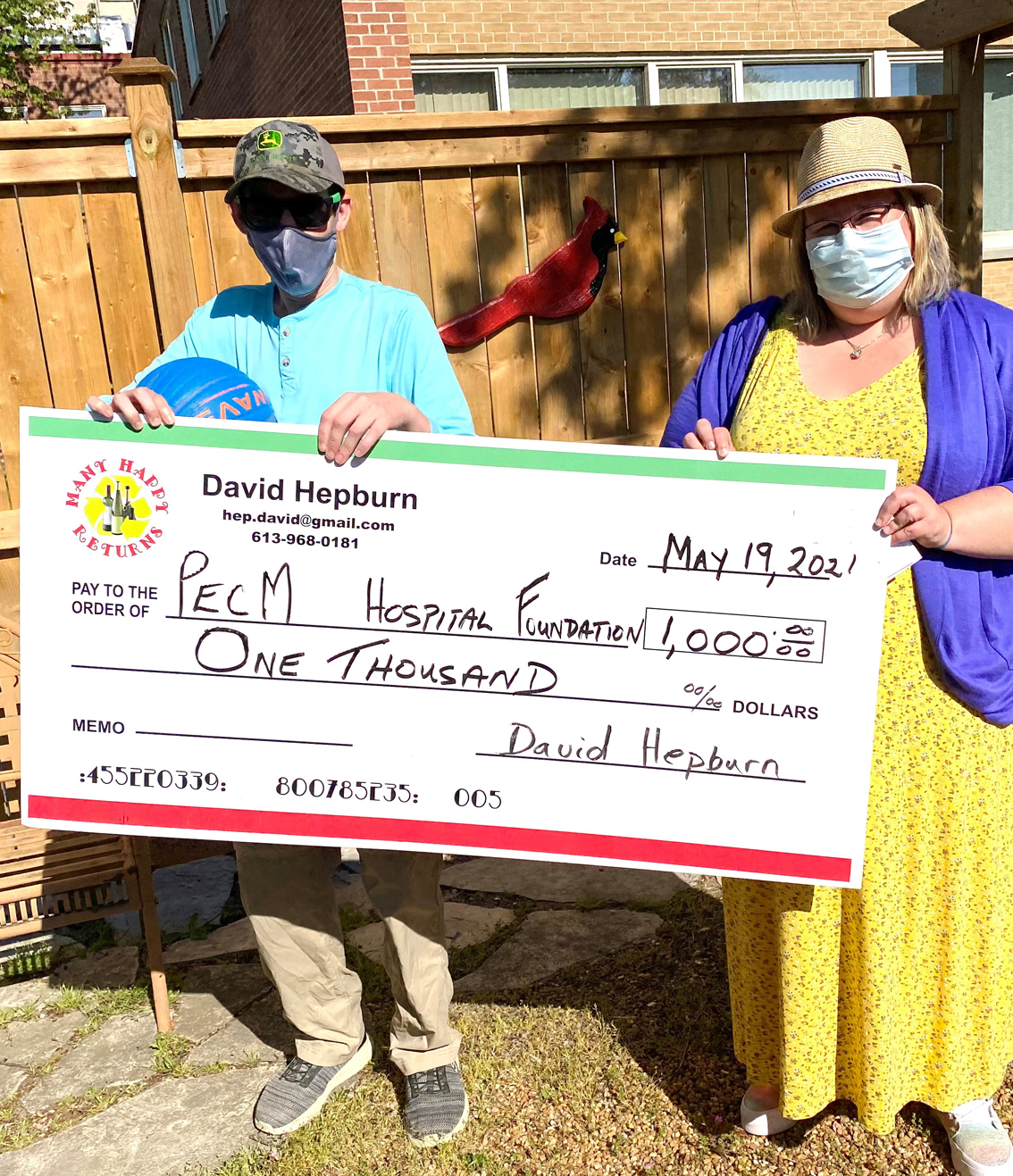 ANOTHER HAPPY DONATION – Last week David Hepburn presented Briar Boyce, senior development officer with the PECMH Foundation with a $1,000 donation on behalf of Many Happy Returns. Not only was this gift David’s largest donation to-date, it was also his 9th gift to the PECMH Foundation.
“David and his team of volunteers with Many Happy Returns have raised $2,150 for Prince Edward County Memorial Hospital since 2015,” said Boyce. “The foundation is grateful for their ongoing support and for keeping our local hospital top of mind during these challenging times. We are also thankful to everyone who supports David with this initiative.”
Many Happy Returns collects returnable bottles and cans and turns them into charitable donations. If you would like to help David continue to give back to the Prince Edward County community, please contact Many Happy Returns at 613-968-0181 or hep.david@gmail.com . (Submitted Photo)