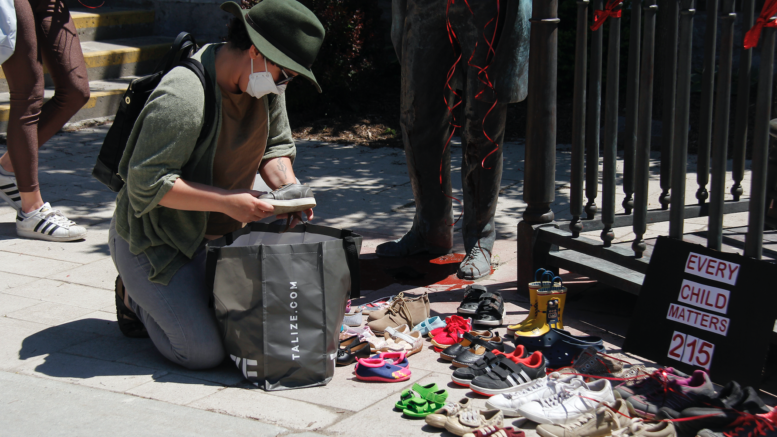 A person lays a pair of children's shoes at the feet of the Holding Court statue. A vigil remembering the 215 undocumented deaths recently discovered at the Kamloops Residential Schools was hosted in Picton Sunday. (Desirée Decoste/Gazette staff)

A gruesome discovery of an unmarked mass grave at the Kamloops Residential School in British Columbia spurred on many protests across Canada this weekend including a vigil attended by around 200 people at the Holding Court statue on Main St. in Picton on Sunday. 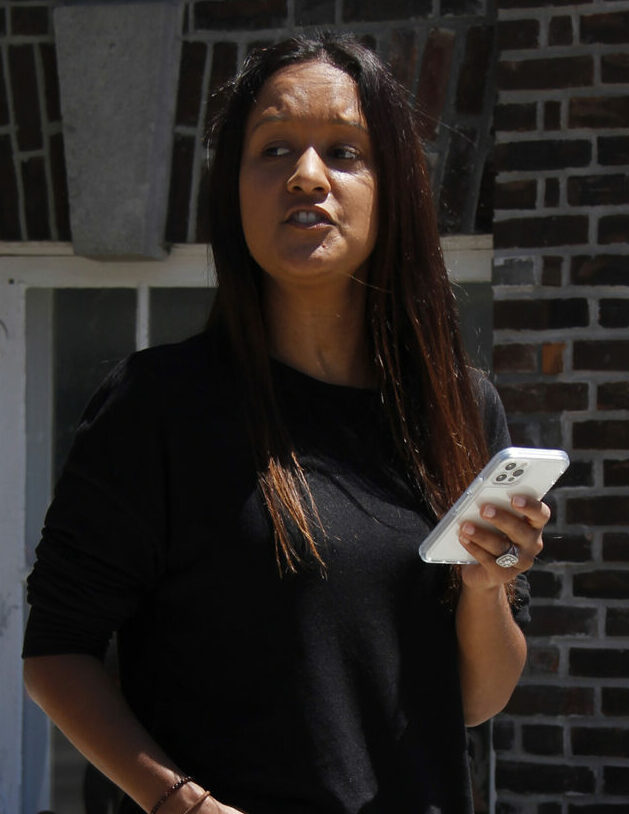 Last week ,the Tk’emiúps the Secwépemc First Nation announced the remains of 215 children-deaths that were previously undocumented- had been discovered at the site of the former residential school in Kamloops by way of ground penetrating radar.

The First Nation is working with BC Coroners Service, contacting the students’ home communities, protecting the remains and working with museums to find records of these deaths. The school operated under the direction of a Catholic order called the Oblates of Mary Immaculate from 1890 to 1969 and then was run federally until its closure in 1978.

In a vigil organized by Fern Dias and All Welcome Here PEC,  people gathered and placed shoes and red ribbons on and around the Sir John A MacDonald statue on Main Street to honour the 215 children found in a massive grave at a residential school in Kamloops, B.C. last week.

The children’s shoes marked the tragic and unnecessary deaths by way of state policy to assimilate First Nations children into colonist society while the ribbons and red paint splotches at the feet of the effigy of Canada’s First Prime Minister signified  his role in the creation and implementation of Canada’s Indian Act.

Co-organizer Fern Dias started the vigil by honouring and acknowledging the land participants were standing on as the traditional territory of the Haudenosaunee, the Wendat and the Anishinaabe people.

“I want to start by honouring and acknowledging that the land on which we occupy and stand upon as settlers, is the traditional territory of the Haudenosaunee, the Wendat and the Anishinaabe people,” Dias expressed. “Your also adjacent to the Mohawk community of Tyendenaga, and I want to thank our neighbours for their continued stewardship, love and care of this land. These lands are steeped in rich Indigenous history and it is our duty to respect and honour these traditions.”

While Dias was a member of the Citizen’s group commissioned-and later ignored-by County council to come up with a solution to the Holding Court statue placement, the organizer said Macdonald’s bronze representation was an appropriate setting for this type of remembrance.

“As a social justice advocate, a scholar in Canadian studies, as well as a human being with a heart, I felt as though we as a community needed to show up and look our country’s legacy in the face,” demanded Dias. “We have a massive visual and a recognition of a man who, for many, symbolizes this very topic of genocide. I felt this location would be a stark reminder of the hurt that he not only caused when he was alive but still causes for many communities to this day. And so we have gathered here today to mourn and to honour the 215 children.”

Fellow co-organizer Wesley Wood spoke to the crowd about his family and how his own indigenous history was a secret for many years.

“My great, great grandmother was Ojibway and fell in love with and married a young French Canadian guy,” Wood said. “They had to make some difficult choices as a family, ones that they were forced to make due to the stigma and the repercussions of being indigenous in our country. When my great grandfather was born they told him the story but told him to keep it a secret, don’t tell people your indigenous. When my grandfather was born, my great grandfather didn’t share the story and didn’t share the secret, it was just simply “You’re white”. With my mom, my aunts and my uncles there was no secret, there was no story there was just the assumption that we are white,” Wood said.

With the help of his Great Aunt, Wood’s family started discussing the story that had previously been a secret as well as the hard choices the family had to make in order to separate themselves from heritage, family, blood and  culture out of fear of what could happen.

“Today I stand in front of you as a white guy with blue eyes and I can not share in the same pain as many of you do but I mourn for my family and the choices they had to make, I mourn for the loss my great, great grandmother experienced and the shame and the secret they had to hold onto. But I mourn for the 215 children and their families. I mourn that we live in a country that puts people in situations where they have to make that choice. I mourn because people who look like me have held power over Indigenous people for too long… I mourn that we have to communicate something (today) our area just refuses to.”

At 2:1, 5 a moment of silence for 215 second was held. Wood then invited anyone to come forward and share a story or thought to the crowd.

Dias spoke to The Gazette and appreciated Sunday’s turnout for an event that was organized in relatively short order. The discovery, announced Thursday, was slow to gain traction in mainstream media and with political leaders. On Sunday, after many had made the request publicly, Prime Minister Justin Trudeau ordered the flag at the Peace Tower above the House of Commons to be flown at half mast.

“Unfortunately, I’m not surprised there hasn’t been more attention paid since this horrible discovery,” said Dias. “This turn Picton out is great. I’m always a little saddened when the turnout for something like this isn’t bigger, but it’s still great!”

Wood added he had hopes for an end racism, segregation and assimilation.

“Maybe someday we’ll join together in this square not for a vigil, but for a celebration to the death of racism, to segregation and assimilation,” Wood said. “I long for that day.”