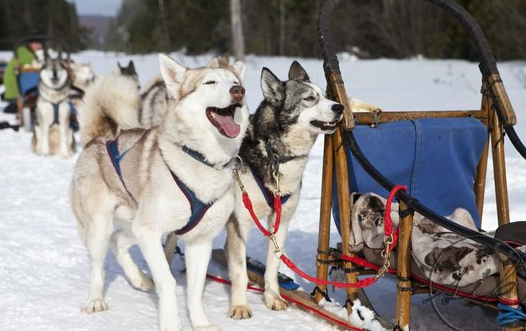 Members of the Winterdance pack in Haliburton, ON. (Tripadvisor.com)

Tuesday’s regular meeting of the Rotary Club of Picton via Zoom went to the dogs.

The DeBruins journey started almost 27 years ago when they bought their first husky while living in Guelph. Thinking they were just adding a dog to the family, they quickly learned that was not quite the case.

One husky eventually turned into two and one night, after watching Iron Will, a 1994 American adventure film, Hank turned to Tanya and said “We have got to try dog sledding.” Soon, dogs three and four were added to the family.

An instant love affair with the winter sport was ingnited as both Hank and Tanya fell in love with dogsledding. Eventually, four pups quickly turned into seven so they both could enjoy their own team. 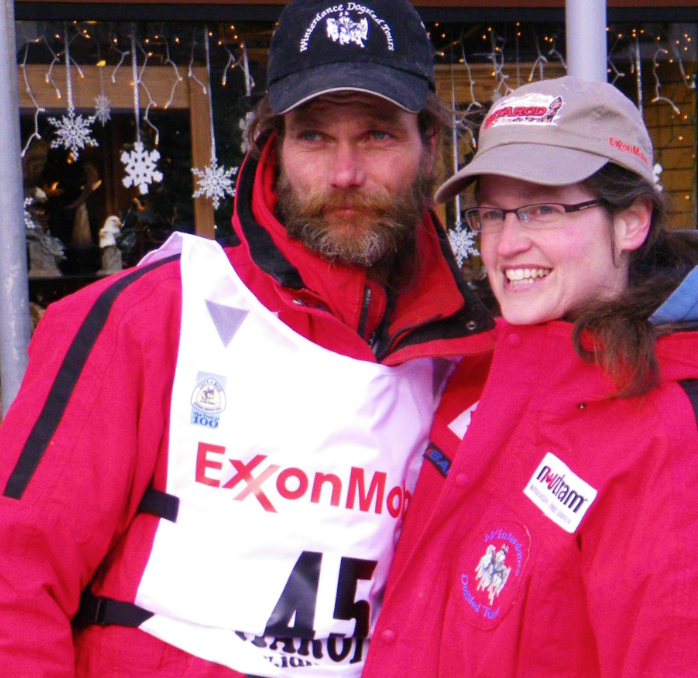 “On weekends and evenings we would go out to Guelph Lake Park and just hookup our four dogs and just have fun but  four dogs was only one team and we both loved dogsledding so huskies five, six and seven soon joined our family so we each had a team. We were still living in suburban Guelph and the dogs all lived in our house and even slept in our bed half the time.  We were just having fun with our huskies.”

Both having grown up on farming on Wolfe Island, city life wasn’t really where the DeBruins wanted to be and, after a friend suggested they turn their love for dogs into something more,  the couple crafted a business plan and didn’t look back.

“I had graduated from engineering at this point and was working for a corporation in environmental engineering and it wasn’t going the way I wanted, so Hank and I were really looking for options,” McCready-DeBruin explained. “One night on the phone, a friend said to us why don’t you turn your love for your dogs into a business. I remember we both looked at each other and thought ‘Could we actually do that?’ and the more we thought about it, the more we talked about it and the more excited we got so we wrote a business plan.”

The Debruins quickly found that when you write a business plan to start a dogsled tour company and put pictures of huskies on the front, walking into banks in southern Ontario and making a pitch is problematic.

“It usually doesn’t go to the top of the pile of businesses they potentially want to fund. I don’t know how many bankers doors we knocked on but it was substantial and two months into this we would either get laughed out of the office, they would just hand us back the business plan or they would be polite and say I’m sorry its not something we can fund,” she said.

At some point while trying to find a bank to fund their business, one of the bankers sent the DeBruins business plan to the Royal Bank in Huntsville where the manager called the DeBruins and asked them if they would be willing to come to Huntsville to meet.

“Out of the blue we get a call from the bank manager asking if we would come to Huntsville and meet with him. When we left that meeting we had a signed business plan and Winterdance was born,” Tanya said. “On September 1,  1999 Hank and I quit our jobs, we rented out our house in Guelph, loaded up our two trucks, our trailers, our seven huskies and our four cats and started driving to Haliburton where our new home was going to be.”

Once arriving at the new house and dog kennel, or what was suppose to those housings, the DeBruins pulled up to two massive holes in the ground and a telephone nailed to a tree.

“It was probably about midnight by the time we got here and driving across Highway 118, this beautiful full moon was rising and it seemed like such an incredible omen for this new life we were embarking on,”McCready-DeBruin laughed. “Little did we know things weren’t gonna go quite as planned. We knew we were behind on construction for sure but as we drove up that driveway all we had was two massive holes in the ground. Bell Canada were the only ones that had been on time and so since they had no house to install our phone in, they actually nailed it to a tree so we had a phone hanging on a tree, two big holes in the ground where our house and the dog kennel were suppose to be. No jobs, technically no business and I was eight months pregnant with our first child.”

The couple ended up starting with the kennel, relatives came and helped on weekends. By early November, the DeBruins knew their house would not be closed in and decisions impacted by necessity took over their plans.

“We had no options, we had no jobs to go back to, our house was rented to this lovely family from Jamaica, there was no going back -we had to find a way to make this work, so we worked day and night, we built our house as fast as we could, we built the kennel as fast as we could, Hank is from a huge Dutch family, so they would come on weekends and help us by early November we knew there was no way we were going to have to house closed in, the kennel was so we made the decision to move into the kennel for the winter,” she recalled. “And a lot of people say you moved into a kennel for the winter and brought your new barn baby home to a kennel, yes we did.”

After opening Winterdance that winter, they welcomed around 200 guests from Toronto to Ottawa to share in their passion of dogsledding.

“That first winter we welcomed about 200 people, and even though its a far cry from the 2,000 normally, it proved that we just weren’t crazy, that people would come from Toronto or Ottawa to join us and share our passion for the wilderness and our amazing sled dogs with them.”