The are immediate tasks for settlers in the period after mourning the lives of the undocumented 215 Indigenous children, some as young as three, discovered in an unmarked mass grave in Kamloops last week. Reading these words are not even the end of the beginning the prologue of this anguishing excercise nor the purpose of today’s editorial submission in Canada’s oldest community newspaper. Consider them more like suggestions from one old stock settler to another.

In order to take a step on the path of Truth and Reconciliation, settlers must listen to and absorb the tellings of the First Nations communities. If anything, the ghoulish discovery should cement deep in the root of the hearts of even the most hardened and apathetic deniers that mistreatment, abuse and murder were allowed to happen by the church and state in an attempt to eradicate and erase a people. The first thing all Canadians must do is acknowledge a generational culture eradication program facilitated through organized religion and later the crown has caused irreparable, emotional and physical trauma all in the name of nation building. Full stop.

No more half truths that try to explain away what went on at these institutions, no more “it was a complex time in our history”, no more “there were good and bad apples” at each school and no more apathy towards the past. Every time a discovery like this occurs, the recycling of fresh and deep wounds are placed upon the hearts of our Indigenous neighbours.

Every discovery-both those known and those yet unearthed- must be owned by every settler who now enjoys the fruits of being Canadian. The next step is to uplift and carefully listen to the voices of First Nations people. Indigenous leaders have been telling Canadians for decades how this national policy of having 150,000 children forcibly removed from their homes and communities to “kill the indian in the child” has irreparably harmed virtually every First Nations family and community. An imagining excercise where your children were sent off hundreds of kilometres away to a school where you knew abuse was taking place and, sometimes, the community’s future didn’t even return home should drive the point home if it hasn’t been already. Ran away and disappeared serving as an easy fabrication for the Fathers and Headmasters of the school to pass on to you, the distraught parents at home. No investigation, no advocacy, no closure.

Listen to the survivors. Over 12 years ago, Residential School survivor and Elder Irene Favel, then 75, told of her experiences at the Qu’Appelle Valley, SK Muscowequan Residential School that operated for over a century. Favel was eight years old when she, like so many others, was wrested from her family home and recalled plainly in a CBC interview what she experienced one day while working in a basement kitchen with the nuns cooking supper.

“There was a girl and she was pregnant from a priest there. She had her baby and they took the baby, wrapped it up in a nice pink outfit and took it downstairs…I was in the kitchen with the nuns cooking supper and they took the baby into the…furnace room and they threw that little baby in there and burned it alive. All you could hear was (this little cry) Uuh! and that was it. You could smell that flesh cooking.”

Chilling. Horrifying. And indeed, necessary reading in the aftermath of this most recent discovery. The voices and the words of First Nations people must be uplifted, amplified and absorbed. These sickening stories such as the one from Elder Favel and thousands of survivors and what Indigenous leaders like Niigan Sinclair and others are saying right now must ring into our souls if they haven’t already. If not now, when? Does anyone think another Kamloops isn’t going to be found with the use of modern technology?

It feels as though we are all standing on the tip of an abhorrent ice berg at a transitional time in our shared history.

The federal government as well as the Catholic and Protestant Churches must be held to accord for their roles in this attempted erasure that caused intergenerational trauma. The Government of Canada and its lawyers must stop fighting residential school survivors in court.

But first, Canadians must listen to and acknowledge the truth of what happened before starting on the path of reconcilation. 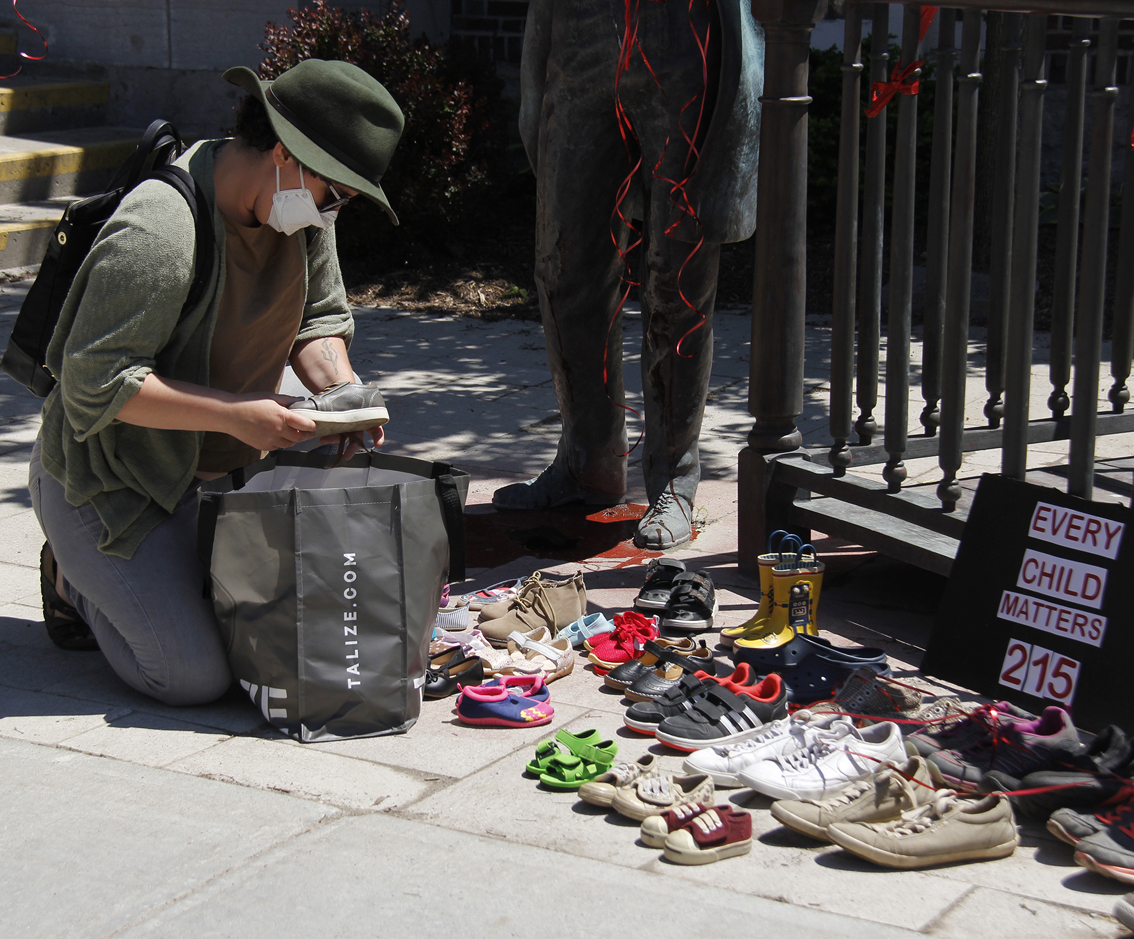 EVERY CHILD MATTERS – A participant in Sunday’s vigil for the 215 victims of the Kamloops Residential School found in a mass unmarked grave last week in British Columbia lays children’s shoes at the feet of the Holding Court statue of Sir John A. Macdonald. Around 200 people took part in the event that was organized by the inclusionary group All Welcome Here PEC. (Desirée Decoste/Gazette Staff)