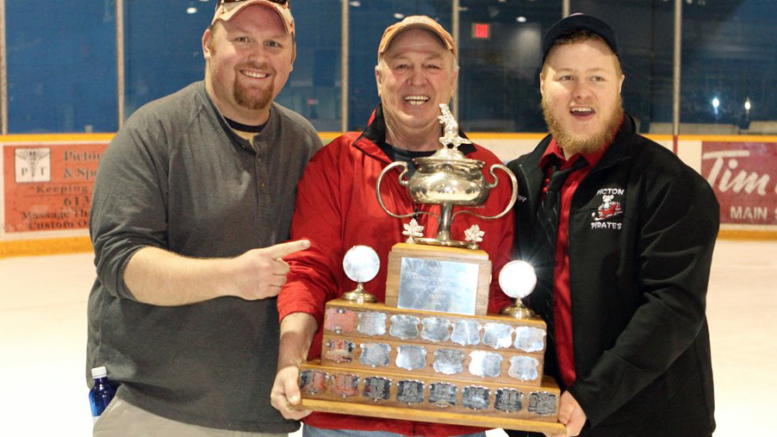 THE PAST,PRESENT & FUTURE- (From left) Jason Parks and Ron Norton celebrate the 2013 Schmalz Cup championship with then-Picton Pirates Coach and GM Ryan Woodward. Parks is returning to the club as GM and Norton has taken over as President during a change of the volunteer executive board. (Dean Peever for the Gazette)

The Picton Pirates are once again looking into their past to help shape their future.

On the heels of hiring a new General Manager and Head Coach, the club’s complete transformation at the executive level for upcoming season and beyond is complete.

At the club’s Annual General Meeting held via Zoom last week, President Chris Masterson, Secretary and Treasurer Nancy Woods and Director of Hockey Operations Adam Bull all stepped away from the team en masse to allow new members to take over the community-owned club that plays in the Provincial Junior Hockey League.

Coming aboard to once again be involved with the club he helped found back in the late 1980’s is Ron Norton.

Norton’s connection with the team includes multiple tours of duty as Head Coach and the Wellington-area realtor was instrumental in building and shaping Picton’s first Empire (now known as the Tod Division) championship in 1999.

Norton will serve as the club’s President while Consecon’s Mike Millington has taken on the role of Vice President.

Millington’s name may sound familiar to Pirates fans as his nephew Pat, a lanky winger, was a key cog in Picton’s second Empire championship in 2011.

Meanwhile, retired family physician Cliff Rice has agreed to serve the organization in an executive capacity as Secretary while Custom Automotive’s Chris Rice will be the team’s Treasurer.

Consecon’s Adam Smith is taking on the role of Director of Hockey Operations.

A wholesale change was brought about after whispers in the hockey community indicated the Pirate ship might be looking for a new port. Permanently.

“Without having new people from the community step up and get involved at this critical juncture, the team was definitely at risk for leaving the community,” explained Masterson. “It was time for the current group to step away and without anyone coming in, the team easily could have been relocated. There was interest from outside.”

Just this past year, the Gananoque franchise went dormant and a group in Innnisfil are attempting to move the club to that village just outside of Barrie.

As well, the rights to the PJHL’s  Ayr entry which was shuttered when that town picked up a Greater Ontario Junior Hockey League (Formerly Jr. B) club has been purchased by someone in the Quinte West area and a formal application for that team to move to Frankford was made to the league.

The PJHL chose to deny any franchise relocations for the upcoming season at their recent AGM as teams are attempting to emerge from the 2020-21 COVID-19 shutdown but the current lay of the land is clear- these organizations are worth a finite amount of money and groups from other towns are willing to invest in hopes of bringing a club to their home arena.

Which led to Norton and the incoming group to spring into action.

“Years ago we had an Ontario Hockey Association team playing out of Picton and we lost it and I said I was never going to let that happen again,” Norton said. “There are times in your life when you have to step away from things you love and other priorities take hold. I’m in a position now where I can return to the Pirates at an executive level with a tremendous group of like-minded and energetic volunteers and ensure this team is here to stay in our community.”

Dr. Rice, who has served as the club’s physician in the past, agreed that losing the team was unthinkable.

“It’s been such a great avenue for so many County and Quinte-area kids to come and play competitive junior hockey. There’s been guys that have gone on to play professionally but the team is more than that. It’s an opportunity for the players to build character and gain life skills that will benefit them after their playing days are done.  As well as the chance for the community to gather at the rink to spend some social time together which is something we will all desperately need post COVID-19,” he said.

Former Pirate Shaw Boomhower- brother to current Pirate Nate- has signed an American Hockey League contract with the Scranton Willkes-Barre Penguins this off season while Pirates alums Abbot Girduckis and Jacob Panetta both suited up for the Jacksonville Icemen of the East Coast Hockey League in 2020-21.

Norton pointed to the efforts of the outgoing executive who had dwindled in numbers but managed to steer the Pirate ship through choppy waters and ensure it was seaworthy and ready to set sail for the upcoming season.

“Looking at everything from the past few seasons, Chris and Nancy and the volunteers were able to have a very competitive team on the ice while making sure the club was financially stable,” Norton said. “That is no small feat and their efforts are not lost on the incoming group.”

The President added without the ongoing dedication of Nancy and former OHA Chair of the Board Dick Woods, the team might have been scuttled long ago.

“Dick and Nancy’s contribution to the organization goes far, far beyond the countless hours they have put into the Picton Pirates over the last 30 years. Without them, I’m not sure we are here today to talk about the team as a current PJHL franchise,” Norton said.

Woods said the outgoing executive was elated a local group was getting involved and ensuring the team stayed in Picton.

The new executive is currently in the process of fleshing out roles and hopes to welcome volunteers old and new when the team hits the ice later this fall.

With the OJHL looking at a start date of Oct. 1, it’s expected the PJHL will be aiming for a Thanksgiving weekend start date but those preparations are entirely COVID dependent.

“It’s going to be a new era with some familiar faces for the Pirates but this club is going to depend on the support of the volunteer base, our fans and our sponsors. We want to build off the success of the previous seasons and we are hopeful the community will continue to support us,” Millington added. “There’s a lot of excitement within the player group with GM Jason Parks and Coach Kyle Hawkins Schulz coming in and now it’s time to build on the excitement of a new board coming in and making sure the Picton Pirates organization is just as successful off the ice.”

Parks noted that it was only fitting for Norton to take on the role of President as his love of the Pirates is evident.

“While he may not have always been a fixture at the arena on every game night, I know Ron has always kept tabs on the organization. As a testament to having the Pirates in his heart, I know he travelled to Essex to watch them play in the 2013 Schmalz Cup finals and I made sure he was on the ice when Picton won in Game 5 to help celebrate that highest high of a Schmalz Cup,” the GM said. “To potentially lose this team was very worrisome to those of us in the loop and I know Ron and this group are dedicated and here for the long haul.”

The Pirates are hoping to host a prospects camp in early to mid August with their main training camp commencing in mid-September.