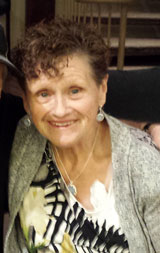 Peacefully entered into rest on Saturday, June 19, 2021 at the Belleville General Hospital, Shirley Vaughan of Picton died at the age of 77. She was the daughter of the late Charles & Roberta Shelley (nee Allan) and wife of the late Donald Vaughan. Shirley was the beloved mother of Liz Brummell (late Harley) of Picton, Donald (Linda Evans) of Stirling, Jack (Tresa) of Cressy and George of Picton. She was the loving grandmother of Jody, Stacey and Craig and great grandmother of Leita. Shirley is survived by her siblings Charles Shelley of Tamworth, Alice Hill of Belleville, Louise Laraby of Arden, Hope Hill of Deseronto, Terry Shelley (Debbie) of Napanee and Pat Hill of Deseronto. She will be fondly remembered by her many nieces and nephews. Mrs. Vaughan is resting at the Whattam-Hicks Funeral Home, 33 Main Street West, Picton (613-476-2450). Visitation will be held on Thursday, June 24, 2021 from 12 noon until 2 p.m. Funeral Service in the Chapel at 2 p.m. followed by cremation. To RSVP for either the Visitation or Funeral Service, please call the funeral home between 9 am – 5 pm to register. Private Family Inurnment at St. Alban’s Cemetery, Adolphustown. If desired, donations to the Heart & Stroke Foundation would be appreciated by the family. Online condolences and to share memories of Shirley at: www.rushnellfamilyservices.com