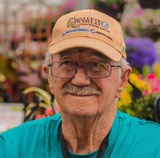 t is with great sadness that the family of Maynard Edward Loner announce his passing on June 26, 2021 in Thunder Bay, ON. He was surrounded by love in the comfort of his home. Maynard had a short career with the Canadian Armed Forces which took him overseas to Germany and Cyprus. He was a Building Inspector for Prince Edward County and loved Carpentry always fixing things for people. Maynard’s love for Prince Edward County was beyond what his family and close friends could ever imagine. Playing darts or shuffle board with his friends at Legion Branch 78 were highlights of his life. He cherished his friends and the activities there that made it a community. Maynard will be extremely missed by his loving wife Violet Loner, her children Janet Robbins, Terry Robbins (Lydia), Verna Dubray( Tony), Irene Robbins (Paul), Cherie Longhurst (Murry), Tina Robbins & girls. He will also be missed by his children, Steve (Laurie), Paul (Jennifer), Rick (Deb), Barbara (Guy). As well his stepchildren Cheryl Ricketts at Smith Falls and Tony McKeown at Godfrey and many Grandchildren and Great grandchildren. Maynard is predeceased by his parents, his brother Charlie and sister Sheila. He is survived by his loving brother Artie(Dawn) and sister Heather (Shawn) who reside in Nova Scotia At Maynard’s request cremation has taken place and a celebration of his life will take place at a future date in Prince Edward County. At this time the family wishes to thank Maynard’s angels Farrah, Janna, Vicki and Heather who ensured him quality nursing care,As well as his PSW’s from Bayshore , Ida, William, Daryl, Mark, Akeil, Arun and Sanjay. A special thank you to his grandson, Garret who supported his mom in caring for Grandpa without his help it would have been impossible to keep Maynard at home. Maynard’s dog Amber was a big part of his life and she slowly walked over rainbow bridge a few months ago. Perhaps they are together again. See you again Pops! Love you forever!