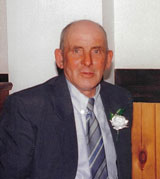 Retired Commercial Fisherman
Peacefully entered into rest at the Prince Edward County Memorial Hospital, Picton on Friday, July 2, 2021, Gerald Ryckman of Picton died at the age of 89. He was the son of the late Gordon & Edith Ryckman (nee Storms) and husband of the late Martha May (nee Hineman). Gerald was the loving father of Randy (Penny) of Foxboro, Michael (Chris) and Ron (Cindy) all of Picton, Angela (Dale) of Milford, Lori (Mike) of Brighton, Krista (Kim) of Oakville and Lisa of Picton. He is survived by his brother Carmen of Mississauga, his sisters Barb Robison (late Orville) of Picton, Judy MacNamee (late Gary) of Wellington and by his sister-in-law Janet Ryckman of Mississauga. Gerald is predeceased by his sister Joyce (late Richard). He will be sadly missed by his many grandchildren, great-grandchildren, nieces and nephews. Mr. Ryckman is resting at the Whattam-Hicks Funeral Home, 33 Main Street West, Picton (613-476-2450). In keeping with Gerald’s wishes, there will be no visitation or funeral services. Cremation has taken place. If desired, donations to the Prince Edward County Memorial Hospital Foundation would be appreciated by the family.  Online condolences at: www.rushnellfamilyservices.com