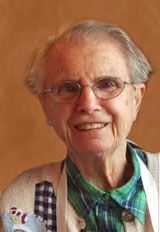 Remembering Barbara
October 18, 1932 – June 26, 2021
Just after dawn on June 26, 2021, Barbara Francis Woodall passed peacefully at St. Joseph’s Hospital in Vegreville, Alberta, in her 89th year. Born in the Green Point community of Prince Edward County, Ontario, to John Hott and Audrey Osborne, she was immersed in the life of hosting summer boarders long before Air B&B was a thing. Barb was an only child on a successful farm in the 1930s. There was always enough to eat thanks to a big garden. Her dad fished with the Tyendinaga folk so there was fish available as well. She went to the local school, by cutter over the snow in the wintertime, and then came into Picton for high school, boarding with her grandparents in their home on Queen St. That house became her home for sixty years when those same grandparents offered Barb and her new husband, Bob Woodall, married at just 19 and 20 years old, a rent to own arrangement. Barb worked at The Gift Shop for many years, after working at Stedman’s before the birth of their son, Blaine. For many years too, she was a Thursday night fixture in the Canteen at Carr’s Auction Sales. Raised Catholic, she embraced United Church ways when she married, and took an active role in several ministries at Picton United. At a time when Sunday school classes were bursting out of their meeting spaces, she served as Sunday school Treasurer. She served with the UCW as well. She and Bob befriended the ministers and their families as they came and went, including a certain young female student minister, who actually became family! Through the years, there were many delicious meals eaten at the Legion, and the summer Fish Fry at Church. The food and festivities that marked their 50th wedding anniversary filled the Church Hall to capacity, with so many of their dear friends and family present. Of all the delightful food opportunities in a long lifetime, some of the most special were the cones at Scooperman’s after a summer evening stroll down Main Street with her two grandboys, Jeffrey and Colin. For Barb, it was vanilla she wanted. Barb and Bob loved to Square Dance. They had lots of opportunities to travel to dance or simply to sightsee up and down the Atlantic seaboard, and across Canada. One particularly momentous trip was the camping holiday to the Calgary Stampede in 1971. It was then that Blaine, aged 11, decided that someday he would live “out west”. That is how a life-long resident of The County came to be in St. Joseph’s Hospital at Vegreville. The spring after she turned 80, Barb came out to live with her son and his family in the Viking and Vegreville area of Alberta. She settled into #12 at St. Michael’s Vegreville Manor, in a lovely one bedroom suite where she was able to stay until her final days. There were field trips to the Devonian Gardens, socials in the Manor garden gazebo, and entertainers to enjoy. She attended the Vegreville United Church with its suppers and lunches and musical events. She walked many miles around the Library gym floor, earning a special Walking Club T-shirt. One special trip home to Picton in 2016 was a cherished memory for Barb, a last chance to see people and places she loved lifelong. Now she will be coming home to rest with her beloved Bob, at Glenwood. We, her family, ask only of the life to come that there may be paths for her to walk without stumbling, held lovingly in the curve of Bob’s protecting arm. Barbara leaves to mourn her son Blaine and (Rev.) Carolyn, grandsons Jeffrey and Colin, sisters-in-law Eleanor, Sheila and Doris, her cousins Dennis, and Sandra, her niece Carol, and several other cousins, nieces and nephews. Her family shares their heartfelt thanks to Emily and Jacqui and the Vegreville Manor staff who gave so much love and care to Barb to honour her wishes, to Dr. Helen Frank for her compassion and understanding, to IRIS Vegreville for critical ongoing eye care, to members of the Walking Club for their welcome, to Al for his support, to Antoinette for her faithful friendship, and to Michelle, Gordon and Patricia for seeing her home. In lieu of flowers, memorial gifts may be given through Autumn Rose Funeral Home to Vegreville United Church, and through Whattam-Hick’s Funeral Home to Picton United Church or Glenwood Cemetery in Picton, Ontario.
To send condolences, please visit www.autumnrosefuneralhome.com
AUTUMN ROSE FUNERAL HOME LTD. VEGREVILLE, 780-603-5800