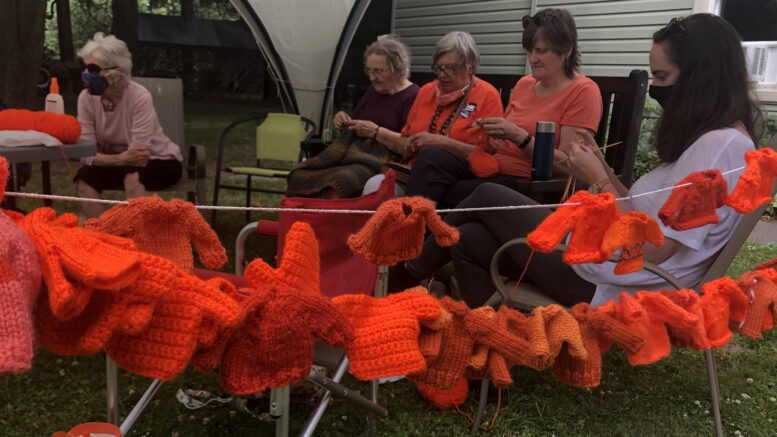 With normal Canada Day celebrations taking a pause in Picton and elsewhere amid the terrible news of over 1,500 unmarked child graves found so far at residential schools across Canada, Rev. Lynn Donovan of St. Andrew’s Presbyterian Church hosted an event Thursday to further educate Canadians and bring more awareness towards Truth and Reconciliation with the Indigenous People of the land.

“One of the calls to actions is churches who are associated with denominations that oversaw residential schools take it upon themselves to engage in education initiatives and also initiatives that would be supportive of our Indigenous Peoples recovering what they lost due to colonization and residential schools in particular,” Donovan told the Gazette. “When I learned the Canada Day event Picton was cancelled I thought we have this piece of art by Christi Belcourt and one of the commitments that came with putting this piece of art on the table was to undertake further education and awareness while knowing that whatever we do, we do with humility and whatever we do, there’s a chance we won’t do it right but we have over the last four years developed some really lovely friendships with people in Tyendinaga.” SUPPORTING THE CAUSE Postcards with Christi Belcourt’s Wisdom of the Universe raised nearly $3,000 for the Onaman Collective Thursday. (Desirée Decoste/Gazette staff)

In total, around  150 people attended the event with $2,955 raised for the Onaman Collective and $564 for the Seed Sanctuary. The Collective is a group of Indigenous artists and environmentalists who love the land,  believe in the spirits of the land and believe in the resilience and beauty of their people.The community based social arts and justice organization is interested in helping Indigenous communities, particularly youth, with reclaiming the richness and vibrancy of their heritage including traditional arts, but with a contemporary spin.

A static display explained to readers what Canada’s Indian Act did to the Indigenous communities across Canada in an effort to create a British colony and what elements of the Act still exists today.

A group of knitters knitted tiny orange sweaters throughout the day to be hung in the Rosehaven Yarn Shop in Picton. The church also handed out 50 booklets providing people with information about the Calls to Truth and Reconciliation.

The Gazette also spoke with Rick Byce, an Indigenous Person of Cree ancestry who attended the event and explained how his father Charles Henry Byce was taken at five-years-old from his Grandmother’s arms to a Residential School. Byce would go on to become Canada’s most highly decorated Indigenous soldier in World War II, winning both the Distinguished Conduct Medal and the Military Medal.

“I’m just happy to  that people recognize what’s going on,” Byce expressed “How everything has been hidden for so many years and it’s finally coming out and people are acknowledging it and trying to understand. “

While his father would be serve with distinction in the European Theatre, his experiences at St. John’s Residential School in Chapleau was one of discrimination and suppression of Indigenous culture. Despite his experiences as a youth, Charles Henry Byce willingly joined Lake Superior Regiment in July of 1940.

After VE Day, Byce was received by King George VI at an investiture ceremony at Buckingham Palace.

“I’m happy now that truth and reconciliation is coming about and the stories are gonna come out and they still have 132 residential schools to check. We’re over 1,500 graves now. Some people are saying don’t be surprised if it’s over 4,000 children. It hurts, I indigenously pray more, I smudge everyday, you know speak with my brothers and sisters. It’s difficult but I’m happy to see all these people here that are reaching out and trying to understand. They can’t believe it and really, who can? Who does that to a child? I don’t know.”

Rev. Donovan explained how this event needed to happen Canada Day or not and what people can do now.

“The question now is really, now what?,” said Rev. Donovan. “Now that all the skeletons are literally out of the closet and now coming out of the ground, how do we ensure that were not simply paralyzed by our history but in fact learn from our history and provide doorways for people to walk through into another pathway. That this (event) happened on Canada Day, there is something symbolic about that, but it needed to happen Canada Day or not. Our community at St. Andrew’s has a vision that is committed to the health of the wider community, all of our other community events kind of reflect that. I think at some level we do this with humility knowing the history of the churches in the assimilation process, but at the same time it’s not enough to be angry, so I thought we have the opportunity here to provide small steps for the community to take in the light of all of the news that is being revealed these days.”

Donovan went on to say this conversation of Indigenous children’s bodies being buried at Residential Schools has been on the table for discussion for Canadians for decades.

“I guess it’s curious to me,” Rev. Donovan added. “Just as a person who studies human nature, this conversation has been on the table for Canadian for decades now and yet what is it about the discovery of young bodies in unmarked graves? What is it about that that’s making us go ‘Oh wow we better pay attention here, something bad happened’. But I think as we move forward as Canadians all we are capable of is maybe baby steps with humility. How do you begin to right the wrongs of that kind of trauma.”

When Byce was asked if he senses a change with regards to how some Canadians are changing their views on issues like Residential schools and the Truth and Reconciliation movement he said he does and he hopes the young people understand the breadth and the weight of the legacy of how Canada has treated Indigenous communities.

“I do sense a change,” said Byce. “It’s starting to grow and I just hope the young people understand, it’s all about the young people- that’s the future,” Bryce said. “Just think the last one (Residential School) closed in 1997, my father was taken to one in 1921 and it went on all those years and they hid it from everybody. Average citizens knew nothing about it. Why? And they burned and buried the records. And for the Pope not to acknowledge what his priests did.”

“To be beaten, abused emotionally, sexually, physically everyday, what is that? I don’t know, I’ll never understand it, how can you?” Byce wondered “I’m more spiritual. Here is your church outside here, and we believe everything is equal. The creator made everything he made the trees, stones and animals so it’s a circle, thats why we have the medicine wheel, everybody in the medicine wheel is equal, no one is ahead, behind or below everybody is the same, that’s a belief, we should all be the same.”