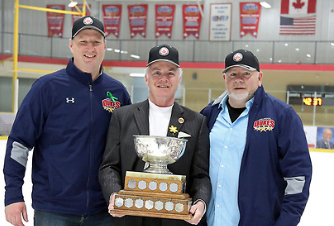 The transition from the first owner of the Wellington Dukes franchise to its second is complete.

Formerly a community-owned entity since the days the late Garry Lavender and Wellington-area leaders worked to bring the Belleville Bobcats to the original Dukesdome in the 1980’s, Mulivhill stepped in to take on an ownership role in 2011 when the dynamics and finances of Junior A hockey in Ontario necessitated a private hand providing stability to ensure a Canadian Junior Hockey League flagship organization like the Dukes stayed at the head of the hockey hierarchy.

The organization explained in a press release this  final transaction completes the final stage of the acquisition that started back in 2017 when Clement began funding the operation in its entirety and took control of the day to day operations.

“The Wellington Dukes organization and the community are tremendously thankful to Michael Mulvihill for his faithful devotion to the Dukes and the Wellington community and appreciate his stewardship of this elite CJHL franchise during his tenure. Michael came to the Dukes when the team was in a very vulnerable situation. He was able to provide a lifeline to the organization by providing not only financial stability but bringing with him a strong business acumen combined with an astute and experienced hockey background that was backed by his passion for the game,” said Chief Operations Officer Randy Uens.

Mulvihill came to Wellington through a connection to then-Head Coach Marty Abrams. A devoted fan of the Junior game and a regular attendee of Pembroke Lumber Kings games, Mulvihill jumped at the chance to be involved with the Wellington organization. One of Mulvihill’s most treasured memories with Wellington has to be the magical 2017-2018 season when the club endured two coaching changes and were on the brink of elimination in the first round of the OJHL Playoffs before defeating the Newmarket Hurricanes en route to a Buckland Cup championship over the Oakville Rangers in six games.

Wellington would defeat the host Dryden Ice Dogs at the 2018 Dudley Hewitt Cup and made it all the way to the final game of the subsequent Royal Bank Cup in Chilliwack, BC before losing to the host Chiefs.

That season also marked the first in Clement’s tenure in Wellington and Wednesday’s announcement marks the closing of the final transaction which sees the Napanee business man owning 100 per cent of the team going forward.

“I am passionate about hockey and I am committed to providing young athletes opportunities to develop not only as athletes but as students and citizens. We are all  about developing great people on and off the ice,” said Clement, a former Junior and Senior A hockey player was part of the  Powell River Senior A team that won multiple Allan Cups and was inducted into the British Columbia Hockey Hall of Fame. “The Dukes provide me with a way to give back to the sport that has given me so much.”

Like Mulvihill, Clement came to the Dukes at a very vulnerable time.

“Clement has provided stability to the Wellington organization during a very tumultuous time for amateur sport,” added Uens. “The pandemic has not been kind to sports organizations but Ken is here for all the right reasons. He is an owner focused on winning. He has no other agendas, he just wants to win and develop athletes.”

In 2019 the Dukes were poised to make another run to the the CJHL championship with a team that was considered to be one of the best in Canada only to be derailed by the pandemic.

“We are hopeful to be back to hockey as usual in 2021-22 and providing the Wellington faithful with another contender,” said Dukes Head Coach Derek Smith. “Ken’s support of the team is unwavering and his commitment to excellence is contagious for the entire organization.”

The Wellington Dukes will continue to operate with very high expectations for success every season.

“We are dedicated to our fans while providing advertisers and sponsors with value added opportunities by utilizing events and an integrated media platform to provide unique marketing opportunities for our partners, ” added Uens.

The Dukes organization is planning to expand  their engagement in the community to provide the community with the same support they receive.

“The upcoming announcement of our “Season Ticket Drive” in support of the Prince Edward County Hospital build is an example of how we want the Dukes to be a strong community partner and to act as a positive catalyst for growth in our community. ”Said Uens.

With the transition, Clement will serve as Governor to the OJHL board and Executive Chairman. Uens will continue as Chief Operations Officer working closely with Smith who is Director of Hockey operations as well as and Head coach.

The Dukes are actively looking for new volunteers to join our loyal brigade of the Dukes Foundation and Volunteer Executive.