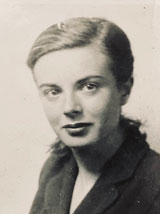 Ruth Ann Walmsley (nee Linell)
It is with great sadness that the family of Ruth Walmsley announces that she died on June 29, 2021 in Toronto, with family at her side. She was 92. We will miss her gentle manner and infectious love of nature. Ruth was born in Toronto to Eric Linell, a neuropathologist at the University of Toronto and Frances Burwash, who worked for the insulin researchers Banting and Best. She sometimes told the story of crossing the Atlantic with her family at age 11 on the Empress of Britain at the outbreak of WWII, and how the ship zigzagged to avoid U-boats as it sailed from Britain to Canada. She and her younger sister, Penelope, welcomed two war guests from England, who lived with the family and joined the sisters in attending St. Clement’s School. Near the end of the war, Ruth worked one summer as a “farmerette”, helping to alleviate labour shortages by picking peaches in Niagara. She lived her two great dreams: a year in Paris studying at the Sorbonne; and marriage to her soulmate, Robert Walmsley. They met at Trinity College, University of Toronto, where she earned a degree in English literature. The young couple moved to his hometown of Picton, Ontario, so that Bob could join the family law practice. In Picton, Ruth and Bob gave their four children a very happy childhood, nurturing an interest in art and books, and a curiosity about birds and the natural world. She was an imaginative and opinionated gardener, planting colourful perennial borders, then adding Japanese and rock garden beds. And she was a great cook. When the family moved to Toronto, Ruth embraced a return to the city. She applied her intelligence and mind for detail to a career as a real estate title searcher at Torys, a leading Canadian law firm. She loved the work and spent 25 years there, retiring at age 76. Loving, and deeply loved, Ruth delighted in her children, 12 grandchildren and four great-grandchildren. In the community she fought for preservation of historic buildings and she supported libraries and conservation of natural habitats. She loved to walk in the ravines of Toronto with Toronto Field Naturalists. Despite a diagnosis of dementia 12 years ago, her ability to connect endured, and when asked how she was, she was known to reply, “Flourishing, thank you!” Her youthful beauty lasted throughout her life. Ruth was the beloved and loving wife of the late Ontario Court Judge, Robert Walmsley; dear mother of Ann (Bruce Futterer), John (Marie Craig), Peter (Sarah Brophy) and Ben (Deborah Lewin); grandmother of Max (Jenny), Alexandra, Alexandre, Justine (Brendan), Benoit, Ben, Sam, Patrick, Will (Maria), Honor, Able and Grace; and great-grandmother of Hazel, Oliver, Simon and Henry. Remembered fondly by Linell, Burwash, Walmsley, Kerfoot and Kennedy relatives. The family extends heartfelt appreciation to the staff of Christie Gardens for their tender care of Ruth. Condolences and memories may be offered at https://morleybedford.wordpress.com. A private family ceremony will take place at a later date. Donations to Toronto Field Naturalists or the Nature Conservancy of Canada would honour her life’s passion.