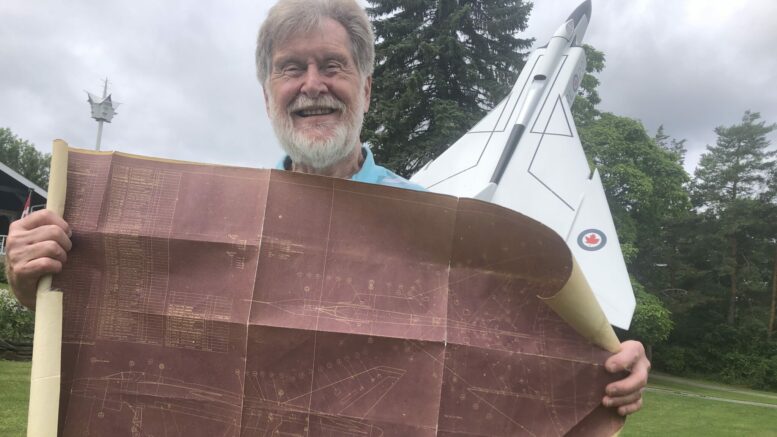 FOUND- Cameron Price of the Arrow 206 group shows off a Avro blueprint of the iconic Arrow aircraft located in Picton in the collection of late Avro employee William Calver. (Jason Parks/Gazette Staff)

Imagine a sun-soaked summer day sometime in the near future in Prince Edward County.

An aircraft with an iconic Delta wing design banks low from the north and travels across local skies, almost demanding every set of eyes take notice. After departing from the Macdonald-Cartier Airport in Ottawa, this short trip involves a fly over of the area where its state-of-the-art wing was tested at Point Petre. Delighting bathers at southern tip of Prince Edward County with a couple of passes, the jet roars its engine with a low level flight over Picton before returning to its home hanger in North Bay.

There have been dreams of resurrecting and constructing a replica Avro Arrow that would delight the Canadian public at air shows and recapture some of the glory erased when the project to build this aircraft well before its time was cancelled.

Thanks to a discovery (or rediscovery) at a home in Prince Edward County, those dreams are closer to reality today. 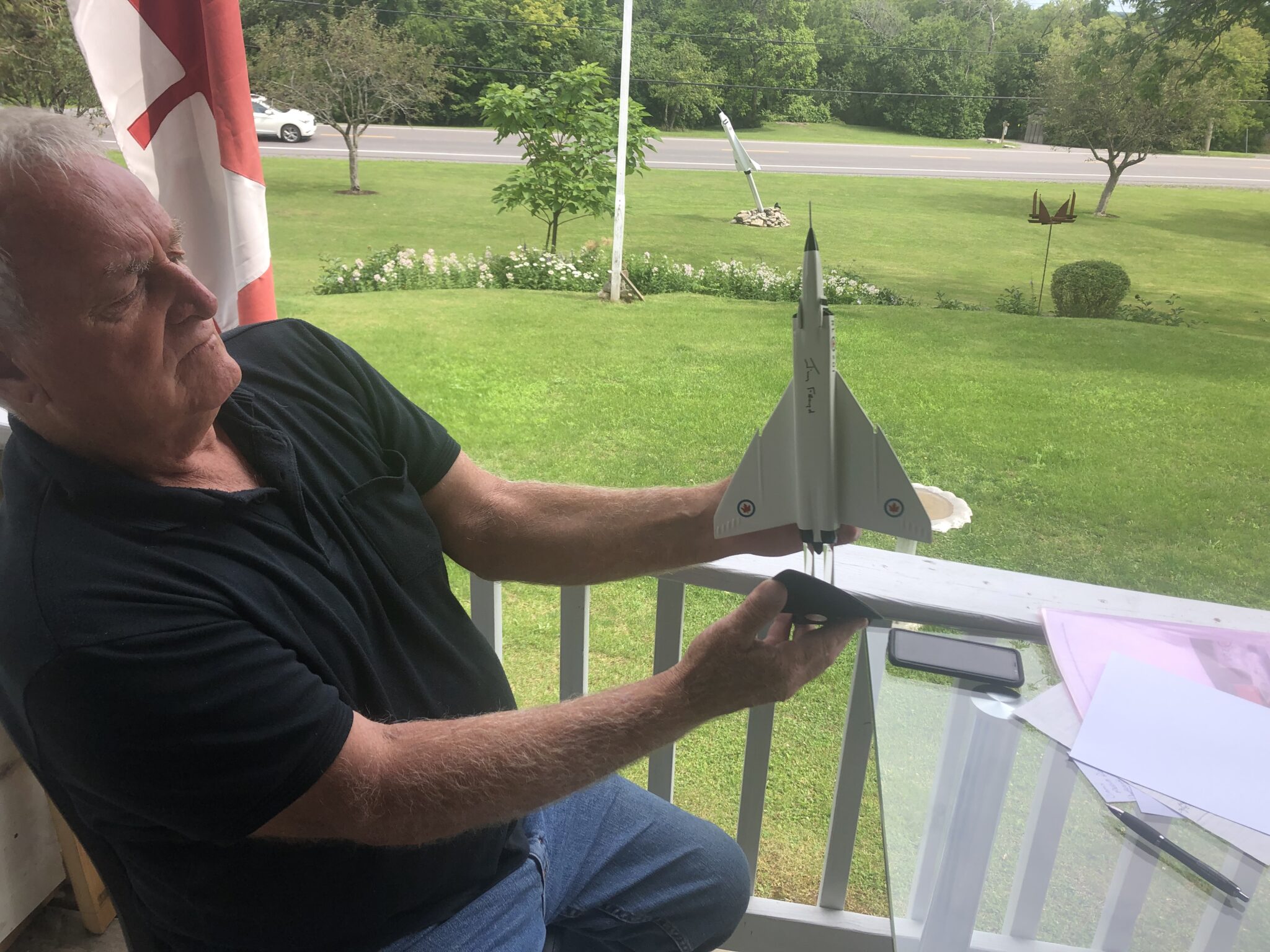 Al Calver with one of several Arrow models once in his late father’s collection. (Jason Parks/Gazette Staff)

Avro company blueprints that should have been destroyed when Canada’s high water mark in aviation and aerospace engineering was ripped to shreds by a political decision made at 24 Sussex Drive in February, 1959 have been turned over to a group of Arrow enthusiasts who have sky high hopes to “Plan, design, build, certify and fly” a full sized, non-military replica of an Avro Arrow MK2.

That aircraft RL25206, constructed and sitting in a Malton hanger ready to be tested a week prior, was destroyed along with blueprints, plans, assembly structures and virtually everything else connected to the groundbreaking Arrow program on Black Friday, February 20, 1959. Then Prime Minister John Diefenbaker, for reasons that are hotly debated to this day, pulled the plug on Canadian ingenuity and crippled this country’s burgeoning aerospace technology sector with one fateful decision. Virtually all the whiz-kids at Avro would be subject to a massive ‘brain-drain’ to NASA or Concord, setting the Canadian aerospace industry back decades.

The Arrow 206 group and executive board member Cameron Price say their goal is not to further debate Diefenbaker’s decision to scrap the program that had built the world’s best all-weather jet interceptor but to re-create what would have become the world’s premier jet fighter.

“An essential requirement for our project is to submit a Letter of Intent to the federal government. in order to gain approval, the Minister of Transport MD-RA Inspection Service requires a photocopy of the an authentic ‘Title Block’ to commence our amateur design,” Price told the Gazette. “The title block could only be found on a blueprint from the original Avro Arrow and the trouble was that ‘officially’, those blueprints were all to have been destroyed on Black Friday.”

Perhaps all were to be destroyed, but somehow, a couple of nondescript blueprint tubes were forgotten in the tool box of William Calver.

After a career in the Canadian Navy which included service on the carrier  HMCS Magnificent, Calver went to work at Avro in the mid 1950’s and wound up on the Arrow final assembly team where dedicated members were involved with the birth, development and, bitterly, the demise of this generational aerospace creation before it could take more than its first couple of breaths.

“He had such a deep love and connection to the Arrow program and flying in general. He had two planes, he crashed one and lived,” son Al Calver recalls matter of factly.

After Avro was decimated, the Calvers moved to Prince Edward County in 1963 although William would travel with his new career at a firefighter with the Canadian Military, working at CFB installations in Shilo and Kingston.

Upon the dissolution of the marriage, William Calver would retire to Newcastle, near his former home town.

His daughter Sue would remain in Prince Edward County and nearly everyone locally knows her as Sue Rose of the annual Angel Tree Christmas gift program.

“Two years ago, his health started to fail and he wouldn’t go to a seniors home so we talked him into coming back to the County and living at Al’s house,” Rose recalled. 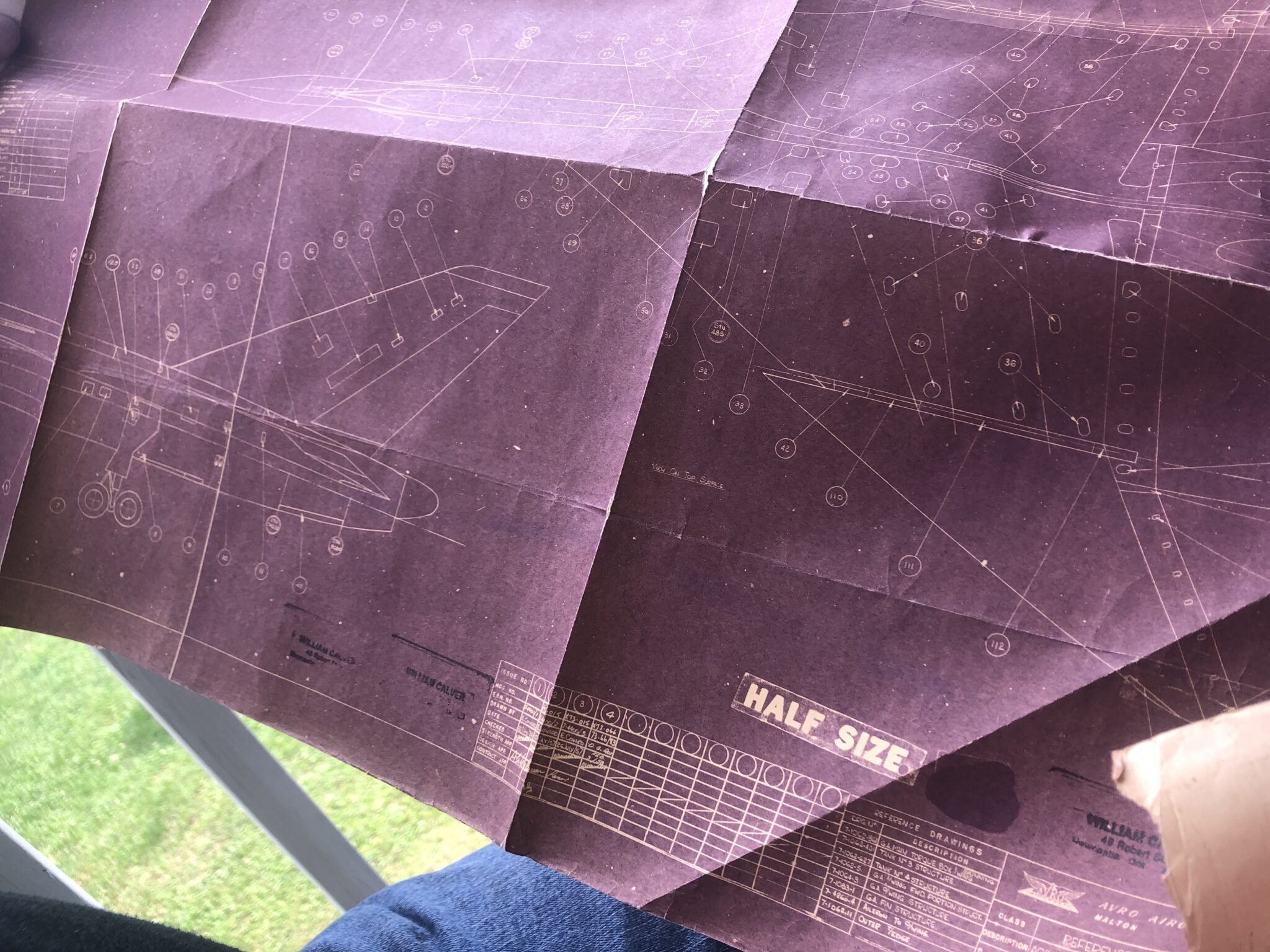 Moving trucks were necessary if only to bring William’s Arrow mementos. All of his Avro paystubs from 1958. Photographs. Souvenirs. Scale models.The largest piece was a large scale model of the 201 which was installed on Al’s front yard on his dad’s 90th birthday and draws Arrow fans passing by, hoping to take a picture of the model aircraft as it makes a near 90 degree ascent.

“A lot of people try to connect this finished model with the testing Avro did out at Point Petre and I have to correct them and say this isn’t the model that was shot out into Lake Ontario,” Calver said. “Those models at Point Petre were made of wood, metal and clay and were for testing different angles of the setback portion of the wing.”

William Calver would pass away just under two years ago and a funeral was held in Bowmanville. That service and its location is significant.

Back in 2016, the Clarington Museum and Archives in Bowmanville held an anniversary celebration of the Avro Arrow and much of the display was from the collection of Calver. Included in that display were two sets of documents that escaped Black Friday in a tool box.

“First off, we didn’t know he had them. And where those blueprints ended up after the museum disassembled the display was the question,” Al said. “We didn’t even know they existed.”

Price knew they existed and were once held by William Calver, former Avro employee. But where was the key “title block” piece the Arrow 206 group needed to start their recreation project? The chase to find these pieces involved a Cameron Price namesake, a cold call to the Bowmanville funeral home and William Calver’s paper boy-known to Price- from 1999 who managed to connect some of the links together for Price.

“The big desire of the group was to somehow track down a blueprint and they couldn’t do it. As far as they knew, the blueprints William had had been lost or kept by someone else. They had no way of knowing for sure,” Price said.

But Price, a self professed “computer guy” started putting pieces of the puzzle together and eventually tracked down Al, a retired policeman from the Waterloo Regional force, in Prince Edward County.

But did the blueprints get returned to William? And did they still exist?

The connection was made and a three hour telephone call established trust between Price and Calver-the late William’s love and desire to discuss and promote the Arrow legacy and the intentions of the Arrow 206 group connecting the two.

Wednesday, July 7 will be the red-letter day if the Arrow 206 project flies (pun intended) as that was the day Calver and Price were able to find a blueprint along with another key document in William Calver’s collection.

“We think once this aircraft is created, it will be a masterpiece representation of the dream of the Arrow. It will fly at air shows, people will want their picture taken with it,” Price said. “The emotions of the Arrow- the pride in what was to be and the devastation of what happened- still exist in a lot of Canadians today.”

Ballpark estimates peg the recreation efforts at $60 million so the 206 isn’t about to be built next week. But if the Arrow is to fly again, Calver and Rose will be lining up for a very special opportunity.

“Thanks to their contribution, Al and Sue have been named as life time members of the Arrow 206 group and they will be offered an opportunity to fly in the Arrow once its built,” Price said.

The Calver kids  flying in a two-person replica aircraft their dad dreamed and beamed about from the day he was hired by Avro, through Black Friday, until his passing in 2019.

“To me, this represents my dad’s wishes of telling the public about the Avro Arrow, what it meant to the 14,000 people that worked there, what we had in our hands and what was lost on Black Friday,” Al said, addin he and Sue’s brothers Frank and Chris are also supportive of their father’s legacy living on through this initiative.

For more information on the efforts to resurrect the 206, visit www.arrow206.com .