Municipal staff presented minor amendments to the parking bylaw since it was originally passed in May, while also honouring the goal to ensure road safety and traffic congestion solutions.

Following the launch of the County’s Tourism Management Plan, numerous parking restrictions are being recommended to ease the overwhelming amount of tourism experienced last summer season, which resulted in a rise of parking fines at several water access points.

Council also heard from Molly McCrea and Jenn Donville, local residents, who have been guiding the reconsideration of the parking restrictions.

They told council residents have been submitting comments, concerns and suggestions through a Facebook group called ‘Residents for Reversal,’ and that a petition has received 625 signatures.

“We were dismayed to learn in May of the elimination of access to our favourite water spaces as a result of a passing of the bylaws in question. We, along with our young children and our parents, have sought solace, exercise and space to be free for many years, but especially in this past year and a half with so many limits placed on our lives already,” McCrea said.

She said the essential purpose of the group was borne out of the need to reinstate access for residents to municipal water access roads such as Hyuck’s Point and North Beach. 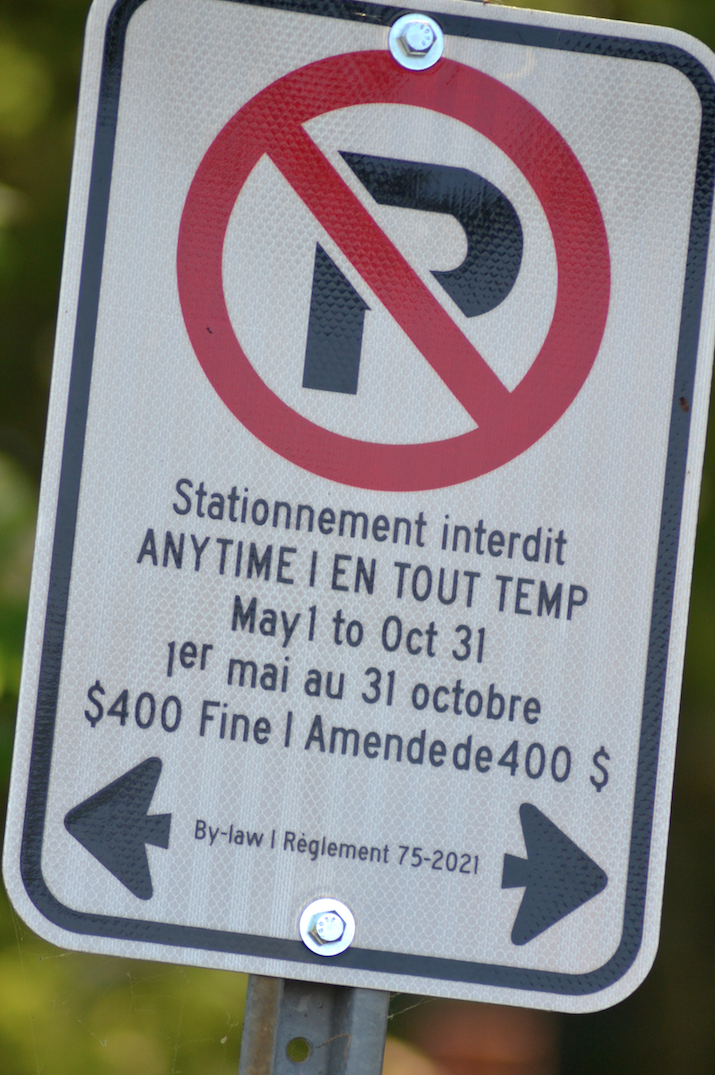 “We are a way for residents to share their experiences and show support for the reconsideration of these bylaws,” she continued. “We are a group of constituents that are asking for action from council and we are a resource to support municipal staff and council.”

McCrea said she and Donville recognize the challenges brought forth last season, which were intensified by the pandemic and call for increased management.

“It is a complex task to balance and serve multiple interests and concerns at the same time when emotions have been running so high and changes are not so predictable. We know that council and staff may not have anticipated the impacts these parking bylaws would have on residents,” she said.

Donville touched on the diverse community members who have reached out with concerns and explained the common themes the Facebook group has received.

“We have heard such a big range, from caregivers who have lost one of the only access points for their loved ones to the water who have with mobility challenges; to high school students who have lost their celebrations this year and planned on taking their graduate photographs at special places along the water that are no longer able to do so; to a young family that runs a business and went to a place where they have gone for generations only to be hit with $300 dollar tickets in a space of two hours,” Donville explained. “There is a really wide diversity of stories that we have received and we really just want to be able to bring that perspective along with some recommendations to council to inform your decision making going forward.”

Donville explained a personal sense of loss paired with mental and physical health factors are two common themes from locals.

“We recognize that it is completely unintentional and unforeseen by council and by staff, but these bylaws do disproportionately affect members of special socioeconomic groups within the County,” she said. “First of all, full-time and essential workers who often access these natural spaces earlier in the day or later in the evening with their families, folks who can’t afford waterfront or water access resources like boats.”

They recommended council create permit parking at various water access points, allowing parking on one side of specific roadways to allow for emergency services to gain access if needed and a two-hour parking limit in Wellington during peak hours.

“More needs to be done to arrive at a sustainable and balanced solution for the long-term and one that really reflects the needs and concerns of all residents,” McCrea said.

Staff amended to include Water Street southerly, according to the report, from West Street to Narrow Street at all times. The current bylaw only lists a two-hour restriction for the northerly side.

“This change better reflects the intent of managing parking in this area and was an oversight by staff in terms of changes proposed when the bylaw was amended,” the report stated. “This change would also be more consistent with the expectations of local residents in this area.”

Staff also proposed to adjust the two-hour parking zone on Niles Street in Wellington but to restrict parking on the north side of the narrow road.

“Feedback from residents of Niles Street had suggested that the north side of the road should be restricted to allow for two-way traffic and one parking lane,” the report said. “As there is virtually no boulevard on the north side of Niles Street between Wharf Street and Maple Street, the road cross section does not adequately support two-way traffic and two parking lanes.”

Staff recommended lifting the seasonal no-parking area at the easterly end of the turning circle at Huyck’s Bay Road. The report states that restrictions approved at the Apr. 27 council meeting have “backed up parking in the area to both sides” of the road.

Staff recommended adding no parking restrictions in the immediate area of all municipal boat launches due to observations of the County’s bylaw enforcement staff.

As part of the County’s Tourism Management Plan, paid parking was proposed as a replacement to the former boat launch fees.

Bakker Road’s restriction on the north side will continue along with a new restriction to be implemented on the south side from the end of the roadway to a point 100 metres easterly.

The report stated, “Staff have received mixed feedback from citizens regarding the parking restriction at the west end of Bakker Road. Staff are recommending changes to keep the road in the vicinity of the parking area clear but to allow for overflow parking further to the east.”

The last consideration was to extend the no parking area on the north side of Stinson Block Road to Lake Ontario to permit access for the property owners. Staff noted while there was confusion with the parking changes, an awareness campaign and signage will assist people while discussion is underway by staff to seek safe ways to enforce further restrictions.

Chad Curtis, the County’s municipal clerk, said all parking restrictions will be enacted this season and will remain until a new parking bylaw is set.