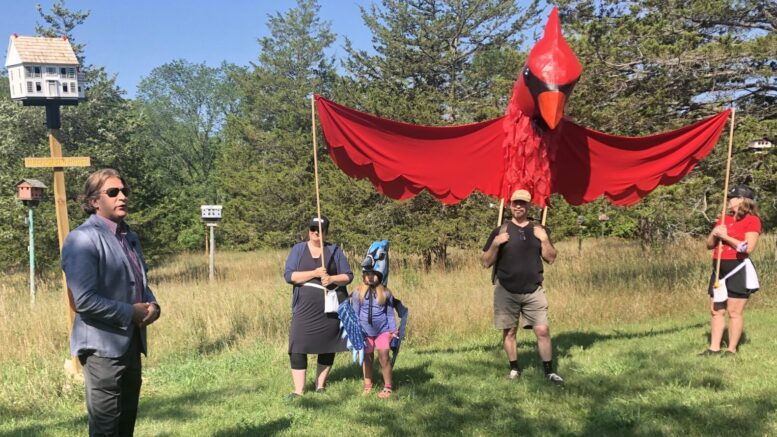 With the Department of Illumination representing those who will soon enjoy the rehabilitated birdhouses at Birdhouse City, Quinte Conservation CEO Brad McNiven speaks to the public on Friday. (Jason Parks/Gazette Staff)

While this corner may have been thinking it-along with several others in attendance at Birdhouse City on Friday morning- Picton councillor Kate MacNaughton gets the credit for being the first to remark about how the rehabilitation of the iconic collection of avian abodes metaphorically compared to current trends in Prince Edward County.

“From urban blight to urban renewal,” MacNaughton noted as the repainted and rehabilitated structures gleamed in the mid-morning sun, awaiting a move-in day somewhere later this summer when the birdhouses have aged to the point where our feathered friends can no longer sense the new paint. 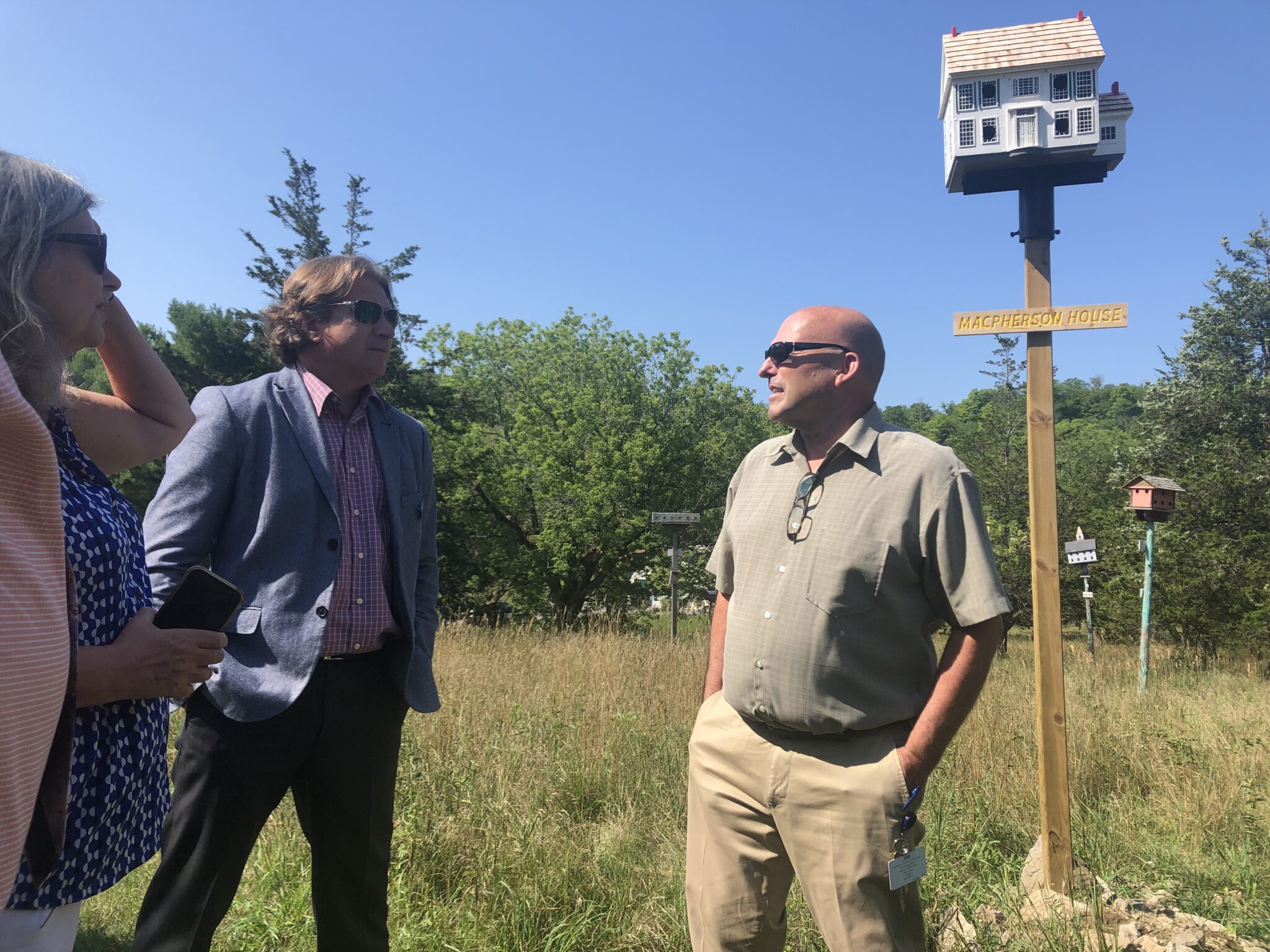 Councillors MacNaughton, Janice Maynard and Mayor Steve Ferguson were on hand at Macaulay Mountain as part of a celebration hosted by Quinte Conservation to unveil 38 newly refurbished birdhouses. The gleaming structures ready for ornithic occupancy were rebuilt and repainted by a group of dedicated volunteers.

Dedicated and opened in 1980 under the former Prince Edward Regional Conservation Authority group, Birdhouse City was once home to over 100 birdhouses that offered shelter for purple martins, wrens, bluebirds, chickadees and tree swallows. While feathered friends have flocked to the nesting nooks since the late Doug Harns’ 80 room Massassauga Park Hotel was the centre piece, Birdhouse City ‘s upkeep and ongoing maintenance has fallen to the hands of volunteers that have worked in numerous cycles with a varying amounts of critical mass.

A whimsical place of some unique houses, Birdhouse City also highlights the culture and development of Prince Edward County and the Quinte area from the pre-Loyalist settlement days to current times.

Thanks to collaboration, a Longhouse built by members of the Mohawks of the Bay of Quinte Arts and Culture centre stands beside some more significant and recognizable houses, structures and businesses in the region.

Friday’s celebration at what CEO Brad McNevin called “one of Quinte Conservation’s gems in terms of ecological significance” was about celebrating the  extraordinary efforts of the current edition of volunteers that have been meeting almost weekly for the past 12 months.

“We are here to celebrate the wonderful work the birdhouse city volunteers have undertaken and some of the restoration work is significant,” McNevin said. “Quinte Conservation is very pleased this group has taken such a strong role bringing these birdhouses back to something that is usable and very visual for the public to see.”

McNiven noted that trails throughout the location would be maintained for the public to view the birdhouses close up but also wanted to maintain that Macaulay Mountain and adjoining Birdhouse City is an ecologically sensitive area and it’s important that the green space is left untouched for everyone-birds and animals included- to enjoy.

“The work this group has done in a relatively short time frame is amazing and Quinte Conservation remains appreciative of all the hard work,” she added.

Volunteer Gillian Carson spoke on behalf of this dedicated group which includes over 50 birdhouse builders, most of whom fell in love with Birdhouse City over the years and were heartbroken to see it fall into a state of disrepair.

“The response from the community to this restoration project has been incredible in terms of individuals stepping up as well as local businesses-Picton Home Hardware have donated 33 new posts to set the birdhouses on and Schoonhoven Landscaping who dug all the post holes- and we have other business leaders who have and who will be helping us moving forward,” Carson said.

When the project got underway at little less than a year ago, there was around 55 birdhouses, most of which needed varying amounts of repair. In total, 38 received care and have been reinstalled on their perches. Carson added working in collaboration with Quinte Conservation on the rehabilitation as well developing work path and sustainability plans as been key to the project’s success.

“Initially, we thought that we might get 10 completed in one year so to have fixed up and repaint 38 birdhouses and reattach them to their posts is wonderful,” Carson said. “”We owe so much of that success to our builders.”

Afterwards, Carson told the Gazette the group of volunteers didn’t want to lose this unique combination of green space that was part park, part conservation, part heritage and part culture.

“A lot of us have been coming here and enjoying Birdhouse City with our children and grandchildren and we didn’t want to lose this incredibly unique hybrid place,” she said.”Our goal is to rejuvenate what was here-maybe not 101 Birdhouses right away but over time we will add and grow. We also want that sustainability so we have talked to Quinte Conservation and we are developing a plan that ensures as volunteers come and go, Birdhouse City stays.”