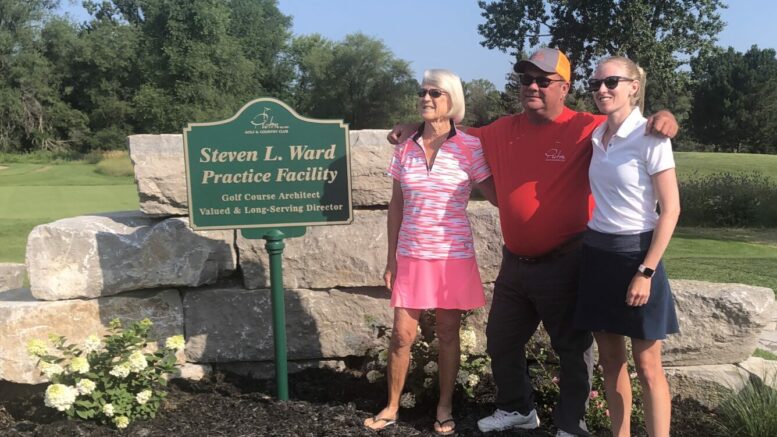 The efforts of a late member of the Picton Golf and Country Club were recognized in a most special way Friday.

A driving force behind the nine hole expansion and other improvements and enhancements at the local golf course, the late Steve Ward has been memorialized by way of naming the new practice facility in his honour. Ward generously gave of his immense talents as a golf course designer to his home course and was integral in the development of the “new nine” which provided capacity of one of the oldest tracks in Ontario to bill itself as a par 72 championship course.

Ward passed away in late December, 2019.

In development and on Ward’s drafting desk for nearly 15 years, the short game practice facility features an expansive, L shaped putting green with a dozen holes, a sand bunker and a fairway apron that will allow any duffer to hone their small strokes. The practice area is located between the pro shop and 17th tee.

Club President Dave Franks said Ward had tremendous impact on the the development of Picton Golf and Country Club.

“This practice facility has been on the drawing board for close to 15 years,” Franks said. “It was long overdue but as you can see, it was worth waiting for. What a statement it makes as you drive onto the grounds.”

“Chris, I know how important this project is to you and the meaning associated with it,” Franks said. “You have succeeded in carrying out Steve’s vision and I’m sure he would be pleased.”

Franks also noted the work of long time member Donna Walby and her “green thumb” work with the gardens that adorn the memorial plaque.

On hand to unveil the plaque were Kathy and Casey Ward. Casey mentioned the original designs on her late father’s drafting board were dated October, 2006.

“So it really has been a long time coming,” Casey said with a laugh. “I really want to thank the board for seeing this project through and their thoughtfulness in dedicating it to my dad…it means a lot to my mom and I.”