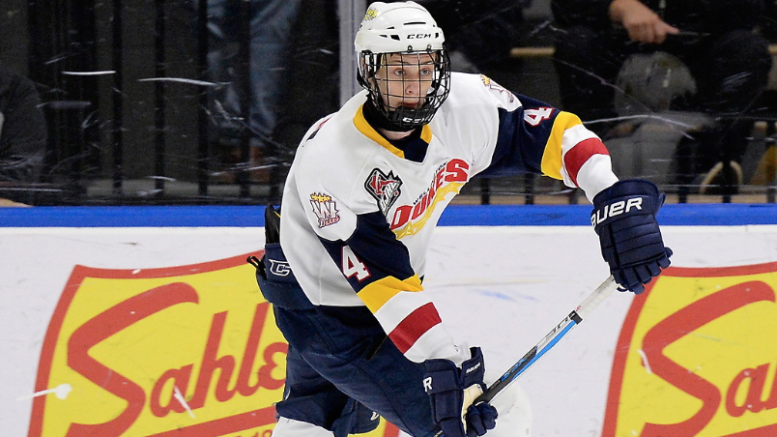 For the first time since netminder Bryan Pitton and forward Chris Auger heard their names called at the 2006 NHL Entry Draft held in Vancouver, a pair of Wellington Dukes alums were selected at professional hockey’s grandest cattle call.

Defenceman Ben Roger set a new high water mark for Wellington grads when he heard his name pronounced by the Ottawa Senators at pick 49.

Meanwhile, Clarington product Ethan Cardwell, who suited up for handful of games for Wellington as an affiliate player in 2017-18 and later went on to play in Trenton and Pickering, was selected by the San Jose Sharks with the 121st selection of the 2021 draft. 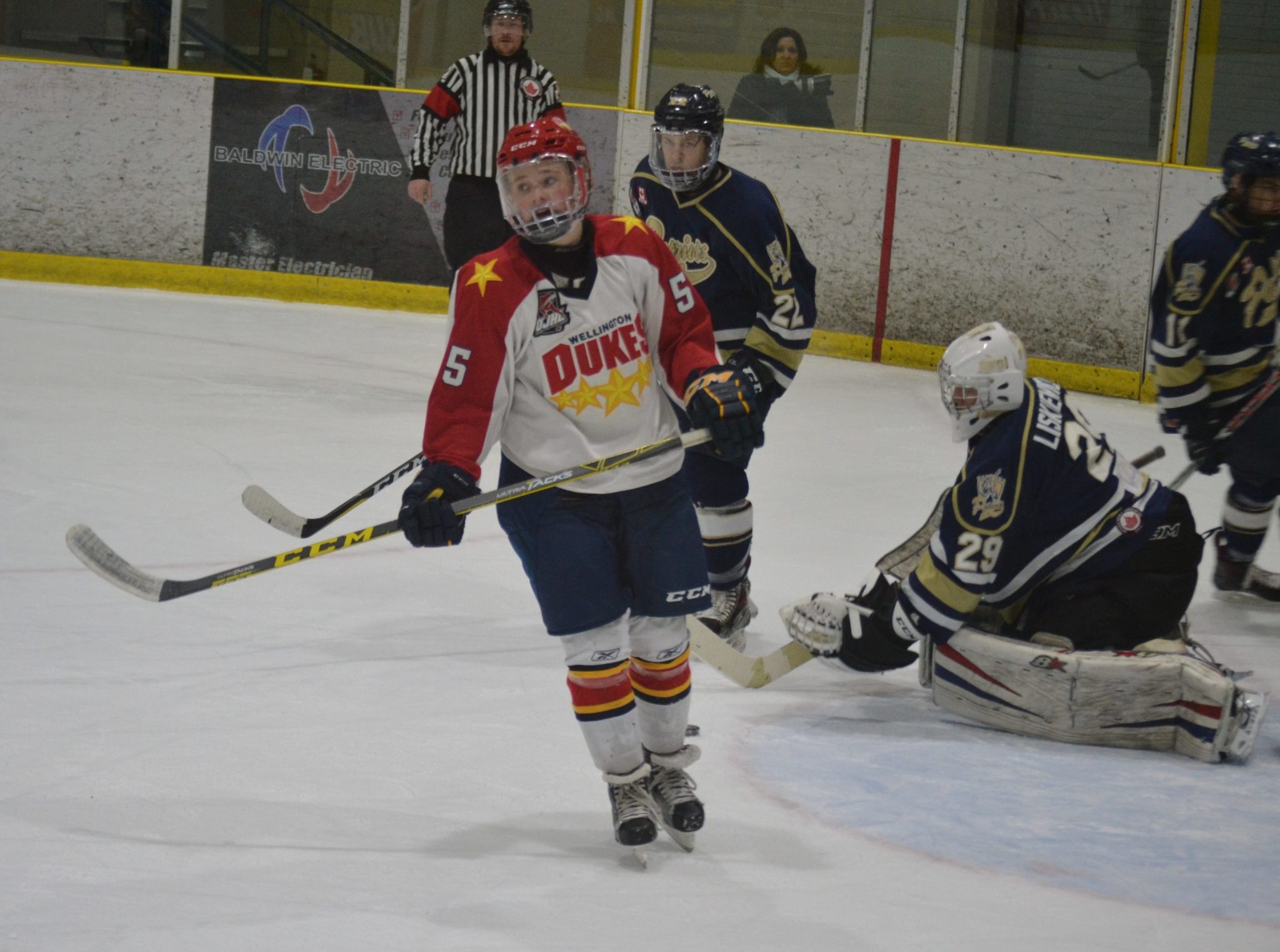 IN SHORT SUPPLY- Due to injuries and players being away from the team, Wellington was forced to call up a number of reserves in mid-2018 including then 15-year-old Ethan Cardwell of the Clarington Toros Minor Midget program. (Jason Parks/Picton Gazette)

Roger AP’d with the Dukes in 2017-18 season, suiting up for four playoff contests before signing with the club the following year.

The rangy, 6’ 4” rearguard played 52 games with Wellington in 2018-19, potting four goals while adding 14 assists as he competently cut his teeth in the junior game.

A London Knights draft pick the same summer he signed in Wellington, the OHL’s Knights came calling and Roger played 35 Major Junior games in 2019-20, picking up six points and turning some heads with his steady, no nonsense play in his own end.

Dukes Head Coach Derek Smith, who spent time in the Senators organization as a player, was extremely proud when hearing of Roger being drafted to the NHL and gave the young defenseman very high praise.

“It’s an amazing accomplishment for “Rog” and his family. He was a huge part of our run to the Buckland Cup Finals as a 16 year old in 2018-19. His skating and footwork is elite and the way he thinks the game helps him on both sides of the puck. His commitment to his development both in the gym and on the ice over the past couple of years is paying dividends with his development trajectory,” Smith said. “He is a great young man and has a very bright future ahead of him in the game”

Roger told a reporter with the OJHL that being drafted into the NHL was one of the highlights of his hockey career when reached for comment.

“Getting drafted has been one of my favourite moments of my hockey career. It was an unforgettable experience and I’m super happy I was able to spend it with the people closest to me. With that said, now the real work starts and I can’t wait to push even harder to reach the next level,” Roger said. It’s been a long journey in my Junior career, starting when I was 15 with the Wellington Dukes and now with the London Knights in the OHL. Throughout that whole time, I really tried to learn everything from my coaches and teammates and pick up on all the little habits guys do to succeed in the game of hockey. I can’t wait to start this next chapter of my hockey career”.

Cardwell heard his name called by the San Jose Sharks in the 4th round. The Oshawa native dressed for two regular season and three playoff games with the Dukes during the 2017-18 season after an extremely impressive Minor Midget season with the Clarington Toro’s AAA program.

The next season, Cardwell would split time between the Trenton Golden Hawks, Pickering Panthers and the OHL’s Saginaw Spirit, who had selected him 33rd overall in the 2018 OHL Draft. Cardwell would go on to have a very productive season split between the Spirit and Barrie Colts during the 2019-20 season putting up 47 points (23 goals, 24 assists) in 63 games. Because of the Covid-19 2020-21 suspended season, Cardwell took his talents overseas on loan to Sweden where he had a very impressive 27 points (9 goals, 18 assists) in just 18 games playing with Surahammars IF.