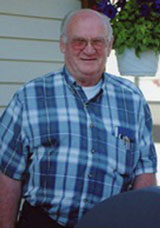 Leo Clarence Howitt
It is with heavy hearts we say goodbye to Leo. He passed away peacefully surrounded by family on Friday, July 30th, 2021, at the age of 88. He is survived by his loving wife Barbara and predeceased by his late wife Isma. Loving father of five daughters; the late Patricia Maw (Dave), Rosanne Lee (Kim), Laura Witty (late John), Glenna Hill (late Kevin), Pamela Cox (Terry) and four stepsons; Michael Davidson, Paul Davidson (Jackie), Terry Davidson (Christine) and Jeff Davidson. He is also survived by his sisters, Colena Longo (Michael) of Cambridge and Gloria Rusk (late Clarence) of Orangeville. He will be sadly missed by his many grandchildren, great grandchildren and great great grandchildren and many cousins, nieces and nephews. Leo was a past member of the Wellington Lions club and Founder of the Prince Edward County MS society. He was a retired transport driver who became a full-time driver for people within the community. He drove anyone that needed a ride to doctor’s appointments, hospitals, shopping and he made many trips to the Toronto airport. He also delivered the Wellington Times and the Wayback Times papers for many years. He loved to travel the country with Barb and Mr. Nibbs Friends may call visit with the family on Sunday, August 8th from 6-8 p.m. at the Ainsworth Funeral Home, 288 Noxon Avenue, Wellington. Guests are asked to wear masks and practice social distancing. A private family funeral service will be held at a later date. Online condolences may be shared at www.ainsworthfuneralhome.com If desired, donations can be made to the PEC Memorial Hospital Foundation Back the Build (www.backthebuild.ca)