If they didn’t already love the political hokey pokey that comes with minority government leader Prime Minister Justin Trudeau calling out the steps, Canadians better learn to deal with the concept there likely won’t be any change in who sits to the right of the Speaker of the House of Commons after the dust settles in the next federal election.

That won’t be because Trudeau has earned a mandate from this polarized electorate-far from it. There are some recent polling models that indicate he might shuck and jive his way to a razor thin majority but the PM’s inability to connect and bring about unity all corners of Canada will likely keep the magic number of 170 just out of his grasp.

It’s Trudeau’s ability to whisper the right thing at the precise right moment that keep the Liberal Party of Canada band in even harmony. There might be a flat note here and there, but in the ears of the right voters who vote in the right places, the dance meanders with no plausible replacement in sight.

While Trudeau somehow seems to keep the conga line moving, Conservative Party of Canada leader Erin O’Toole has demonstrated to voters he has two left feet and can’t pick out the tune Canadians want to swing to.

Polls don’t vote and plenty can happen between now and the day Canadians elect the 43rd parliament but the recent data collected by Legér (A firm with an A+ rating from Canada338.com) all but assure another minority government is in the offing.

While it’s nearly impossible to read and even more impossible to imagine coming to fruition, O’Toole is trailing in Alberta and Manitoba / Saskatchewan to both Trudeau and New Democrat Party leader Jagmeet Singh when it comes to preferred Prime Minister. This doesn’t mean CPC members aren’t going to get re-elected in the prairies but it does beg the question if O’Toole can’t garner support in his proverbial back yard, what chance do his CPC candidates have in Ontario and Quebec where elections are won and lost?

This question must be burning in a number of minds within the CPC power structure. This weekend, well placed sources within the party started chumming the waters, stating in a Toronto Star story there were hopes for an O’Toole among the ranks that will allow for some kind of Come-to-Jesus factory reset.

But it says here bringing everyone back under the big blue tent of united conservatism won’t be easy. The Maverick Party is slowly chipping away at Conservative support in the west after O’Toole maintained his preference for carbon pricing which is the ultimate catch 22 for a conservative politician in this country.

Deny climate change and go with the status quo to curry favour with Albertans or embrace carbon pricing to appeal to a wider swath of Canadians only to alienate your base.

Take that face! I didn’t need that nose anyway!

Independent Hastings-Lennox & Addington MP Derek Sloan and his True North Party will almost certainly be the flavour of the month for the anti-vaxx, anti-mask, anti-everything and too smart for the room folks if he can manage a slate of candidates.

Toss in populist Maxime Bernier and his People’s Party of Canada and all of a sudden, those voters on the right side of the spectrum might have an option to lodge a protest vote-multiple options in fact.

While the track might be on repeat and the wallflowers are caterwauling, it’s near impossible that the current leader of the Conservative Party of the Canada will be the one changing the tune of Canada any time soon. 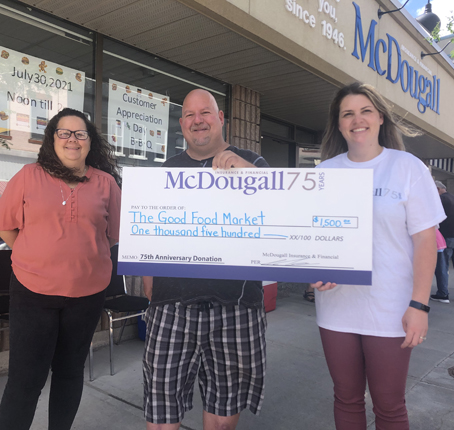 IT’s ALL GOOD – (From Left) Terri Martin and Scott Whitelock of The Good Food Market accept a cheque from McDougall Insurance and Financial Picton Branch Manager Lesley Harrison on Friday. In honour of McDougall’s 75th anniversary, branches throughout Ontario were donating funds to various initiatives in their respective areas and hosting complementary barbecues. (Jason Parks/Gazette Photo)