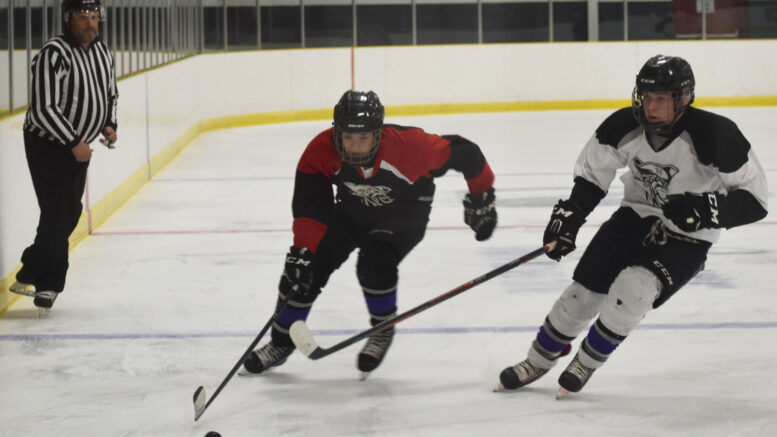 THE RACE IS ON -County Kings (From Left) Riley Grimmon and Liam Rice race for the puck during Picton Pirates camp in Belleville this weekend. (Gazette Staff)

A week after watching hungry prospects audition for positions with the hockey club, the Picton Pirates veterans returned to the ice for the first time since the team played an exhibition series with the Napanee Raiders in March.

Returning team captain Devin Morrison, Nate Boomhower, Nick Kirby and Noah Brant on the blue line were among the Pirates regulars getting some reps in and gauging just how close (or how far) they are from being in game shape when the puck drops on the 2021-22 PJHL season Oct.2 when Picton visits Frankford. 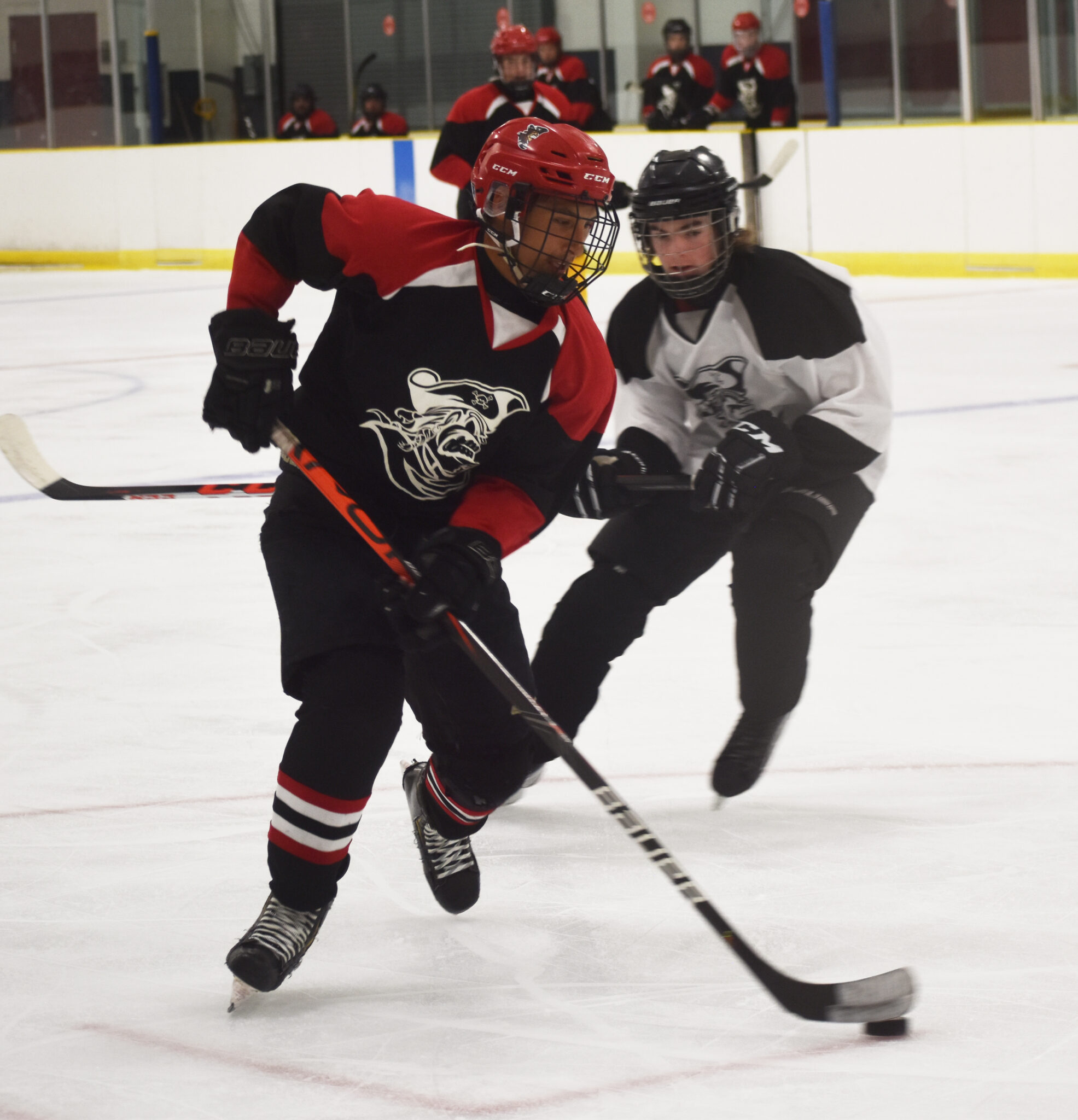 It was a collection of flushed faces and doubled over hockey players as most of the experienced Pirates double dipped and played two sessions per night this past weekend at the Wally Dever Arena in Belleville.

Picton Pirates General Manager Jason Parks said a week after seeing what’s out there for prospects with the club’s mini camp, it was he and new Pirates Head Coach Kyle Hawkins Schulz’s opportunity to take stock in what the club had in its talent cupboard.

“Right now it’s a race to be the first team in shape and we can’t spend two weeks having guys play their way back into game readiness,” Hawkins Schulz said. “That burns two weeks that we don’t have with a shortened, 35 game regular season schedule.”

“It was a valuable weekend for us to see what we have, meet the players and gauge exactly where they are in the conditioning process heading into our main camp which opens Aug. 22 in Wellington,” Parks added. “For some of these guys, it was their first time on the ice since late spring and that certainly showed.”

The GM mentioned some veterans such as Boomhower requested to play both games as a way to jump start training in advance of the season.

“Boomer’s really excited about what lays ahead for his last season in junior hockey and I know this weekend was a jumping off point for him. Someone of his size and experience is so valuable to any team in this league and we’re lucky to have that combination,” Parks added.

Also back into the fold was returning Pirate forward Bailey Matthews.

The son of former Pirate Scott Matthews has returned to the team after a successful Schmalz Cup run with Napanee in 2019 and is excited about the direction Picton is headed.

“It will be a balance with work and everything else but it was great to see some of the guys again and start thinking about the regular season,” Matthews said.

Hawkins Schulz added the he was thrilled to add both the talent and experience Matthews will bring to the line up every night.

“Guys that have battled for a Schmalz Cup just don’t fall out of trees so to have a warrior like Bailey in the fold is huge for us,” Hawkins Schulz added.

Parks said that was by design.

“I’m not sure if they’ve ever played on the same team like this so I thought it was a special opportunity for them and the Dever family to be connected on the ice this weekend,” Parks said. “We know right now Jack is focussing on Major Junior with James Boyd and his Ottawa 67’s. If we ever get a chance to play a greater role in Jack’s development, we are ready for that opportunity but the process has to play itself out.” 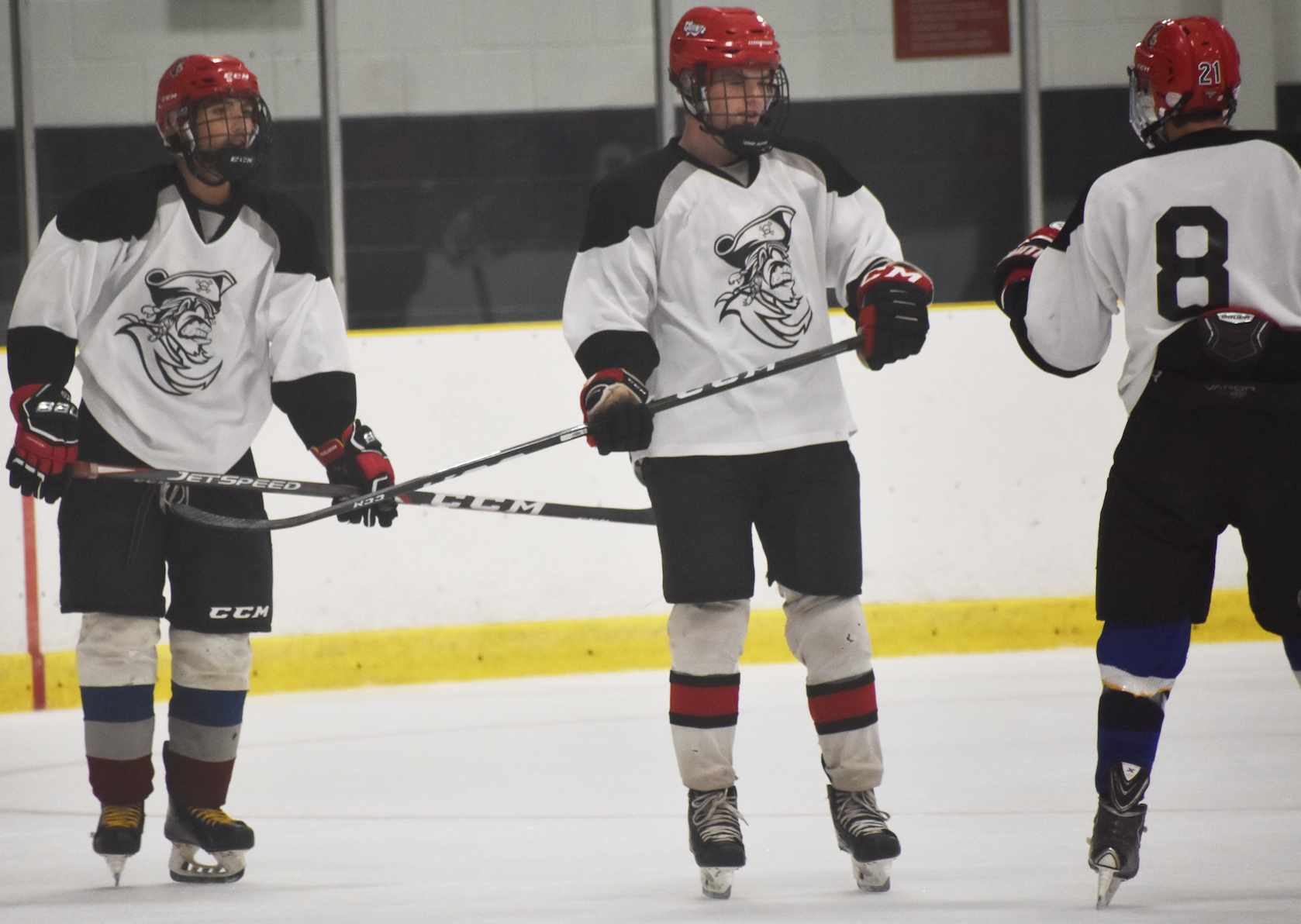 “Nolan had an outstanding weekend and I was really happy to see Kempers battle and assert himself. He was definitely noticeable this weekend in a positive sense.  As  2005 births, the opportunity is there for him, Smith, Rice and Grimmon to really focus on this camp and then this  upcoming season to develop into the next generation of local Pirates,” Parks said. “Parker was able to switch gears and make some plays that drew our attention and he’s right in the thick of it for one of our forward positions,” Parks added.

The club reached agreements with Port Hope and Amherstview this weekend to fill out its preseason dance card.

Picton will host games in Wellington at Lehigh Arena on Sunday Aug. 29 against Napanee, Thursday Sept. 16 against Amherstview and Thursday Aug. 23 against Port Hope.

“We still might add another game or two but we wanted a minimum of half a dozen exhibition games before we make our final roster decisions,” the GM added.

Parks and the Picton staff will be at the Wellington Dukes Identification Camp at McKay Insurance Arena in Belleville this weekend to further sleuth out prospects and players that would fill the need of both clubs.

“In speaking to Head Coach Derek Smith, GM Rob Ridgely, and Vice President of Hockey Operations Randy Uens, we are all of the same mind there’s a key role for the Pirates to play in the development of future Dukes as well as a function to ensure the OJHL club has a critical mass of affiliate players close to Lehigh Arena so we are going to start that process this weekend,” Parks said. “We have some billet capacity this season to make it all fit. Between what our scouts have sent us so far and what’s possibly coming from OJHL camps, we are very excited for what this season holds for our organization.”

The event is open to Dukes fans.