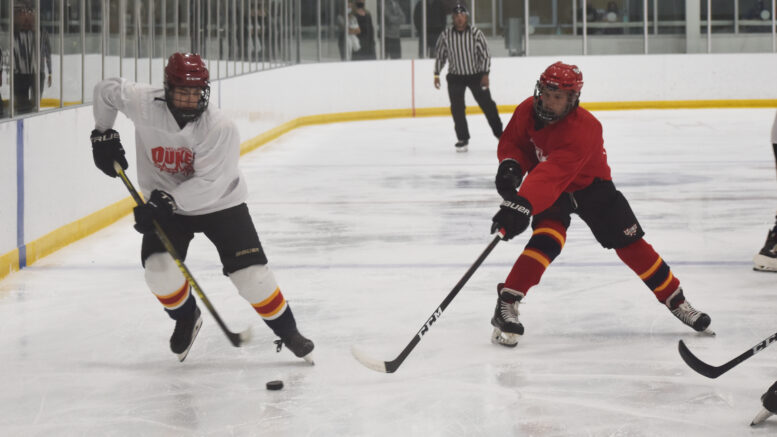 Prospective Wellington Dukes hit the ice this weekend at the McKay Insurance Arena at the Quinte Health and Wellness Centre as the hockey club started to go through the long-awaited machinations of preparing for a hockey season.

And while hockey’s apple cart could be quickly toppled due to COVID-19 and a fourth wave, it’s clear hockey talent from hither and yon are eager to get back on the ice and get back to the game they love. 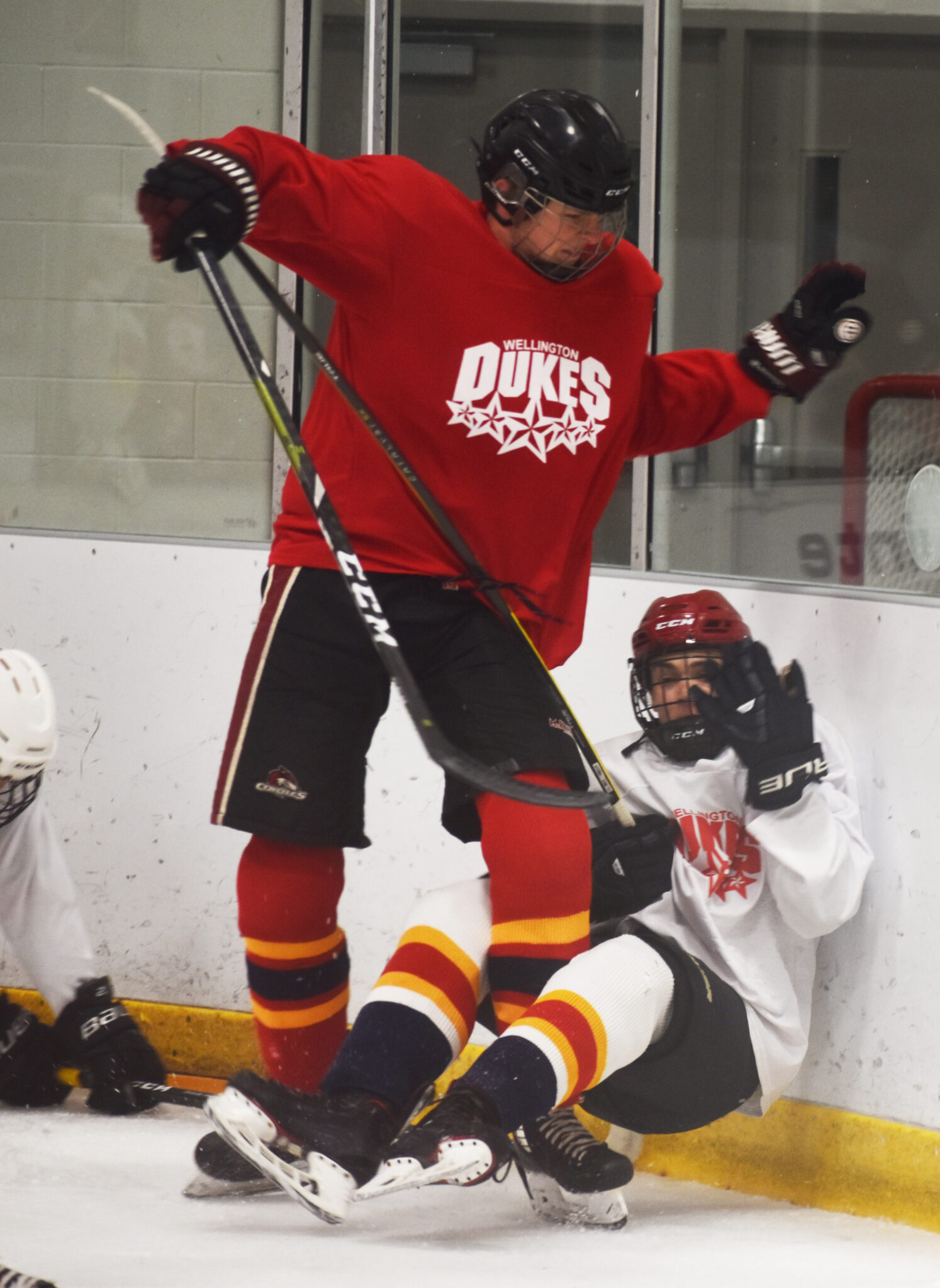 Wellington Dukes General Manager Rob Ridgely and Head Coach Derek Smith were impressed by the conditioning of players and the tempo at which the weekend scrimmages were played. In total, over 200 parents and die hard Dukes fans watched four teams battle to catch the eye of the Wellington braintrust.

“The tempo and pace and desperation was a real eye opener and something we are happy to see,” noted Ridgely. “The players have come hungry, ready to compete and in shape.”

Smith added there are no givens for the upcoming 2021-22 Ontario Junior Hockey Season as hockey has featured somewhat of a reset.

“Honestly, it was great to see some real hockey. Guys showed up in shape ready to compete and that was great. It’s going to take some time for everyone to get up to speed to contact hockey again but there was some solid physical play and that’s a big part of our level,” Smith said.

While Wellington will be on the regularly for the next few weeks prior to a shortened training camp that will commence Friday, Sept. 10 and feature exhibition games that same weekend against Trenton, Smith said no veteran can take anything for granted at this stage.

“Whoever has the sharpest edge and is ready to go when the season starts will be the one making this team, Smith told the Gazette. “Nobody owes anybody anything. Guys who have and continue to put the work in are the ones who will be successful.”

This weekend’s “Identification Camp” kicked off with a few hours of drills and while that might seem the regular, run-of-the-mill fodder for these types of excursions, tripods supporting sensors and timers have hardly been commonplace at the Junior A level. Until now. Game Ready Testing, an outfit based in Belleville, was on hand to time players as they worked they way through drill after drill. Forward skating, backward skating-all with and without the puck will help players get a base line for thier individual skills and how they compare with their cohorts.

“Really, this gives players the type of analytical feed back that helps them make those minor improvements in the area of their game and its the kind of tool progressive hockey organizations are utilizing to increase personal development,” Smith commented.

For instance, a player would have received an email an hour or two after the session that would have indicated they were above average skating with the puck forward but below average skating with it backwards. That type of data allows the player and staff to create a personal skills improvement plan complete with appropriate skills and coaching oversight. Smith said in-season testing will allow for players and staff to see where improvements have been made or where skills have been diminished and entire practices can be pre planned with stations for players that need work in specific areas.

“These types of deep dives on skills are what’s going to pace development and keep our players on top of what they do well and what they need to work on outside of systems play,” the coach added.

Wellington was back into the comfy confines of Lehigh Arena on Monday for a workout at the DukeDome and Smith commented the municipal staff had done an outstanding job installing ice on the playing surface. “We weren’t sure to expect because of the time of year but the ice was outstanding. The County’s team has really set us and all the ice users up well judging by the first day,” he added.

While nothing can considered to be static in the hockey preseason-particulary after a season hobbled by a pandemic- Smith said he’s expecting good leadership out of a number of veterans, particulary forward Mason Reeves. 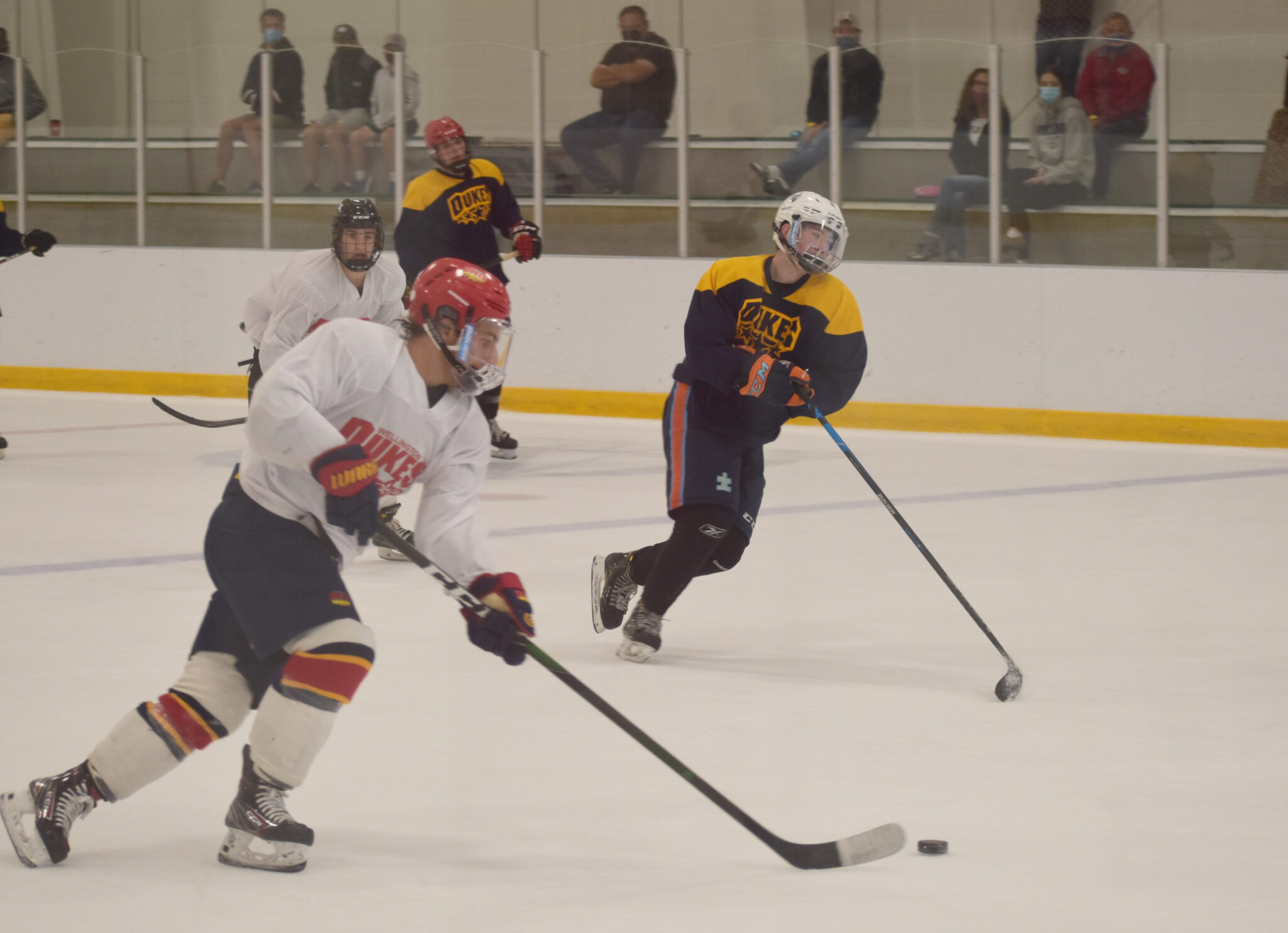 The 6’4” Waterdown, ON native enters his final OJHL never having produced prolific offensive numbers in his tours of the Alberta, BC and Greater Ontario Junior B leagues but his game played in the trenches and high traffic areas where space is made through hard contact.

“Last year nobody really got to see what he can bring in a physical sense but he’s going to be someone who can be vocal in the dressing room, hold everyone accountable and then go out on the ice and lead,” Smith said.

While it seems Joynt is still a fresh faced youngster, the Kingston native is about to enter his third season with the club. Smith said Joynt is an example of a ‘heart and soul’ Duke who has committed fully to the Wellington program and came into this weekend in top physical condition.

“Guys like Barrett, Cole McGuire and Vreugednhil are the guys we expect to take a huge step forward and be the leaders of this hockey club this season,” Smith added. Wellington is slated to open the 2021-22 season at home on Friday Oct. 1 against the visiting Mississauga Chargers. Wellington will be in Cobourg the following evening to play the Cougars.

LEDES AT LEHIGH: Earlier this summer, Wellington picked up puck moving defenceman Jonathan Balah from the Aurora Tigers. In 19-20, Balah led all Aurora blueliners with ten goals and 26 assists in 54 games. More recently, the club moved rearguard Ben Hamilton to the Cougars…Wellington also inked Tanner Dietz, 18, from the Huron Perth Lakers program. No immediate relation to Jacob Dietz, Tanner Dietz had 16 goals and 35 helpers in 35 games at AAA in 2019-20… After one year at Alabama-Huntsville, former Dukes sniper Frank Vitucci has transferred to Stevenson University in Maryland to play for the Mustangs…Former Duke and Picton Pirate Griffin McCarty was named as the head coach of the UCLA Bruins NCAA hockey program earlier this summer…and speaking of players who plied their trade in both County junior hockey uniforms, Darcy Murphy signed a contract to play with the Belfast Giants in the Elite Ice Hockey League.