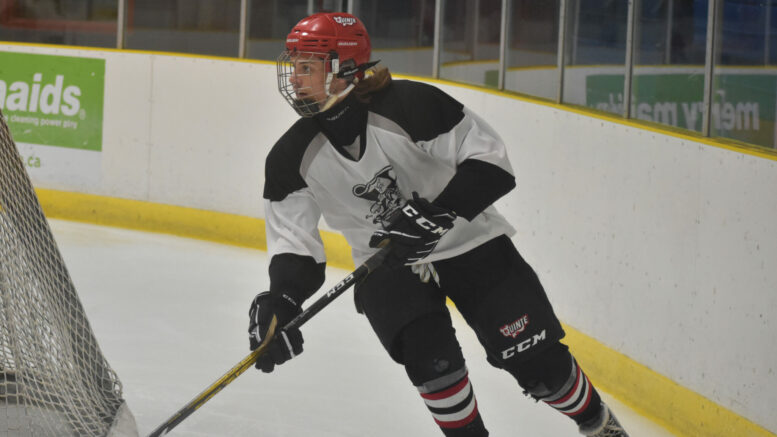 The Picton Pirates have signed 2003-born blueliner Trot Davis for the upcoming season. Davis played 36 games for the U18 Quinte Red Devils in 2019-20 and the rearguard is regarded as a defensively minded player. (Jason Parks/Gazette Staff)

The Picton Pirates have made their first signing of the 2021 summer training camp season, adding right handed shooting defenceman Trot Davis to the lineup for the upcoming season.

Davis, 17, played for the Quinte Red Devils Major Midget program the previous two seasons and is a Belleville native.

Pirates General Manager Jason Parks said the club was proud to start off the signing season with Davis.

“What we noticed with Trot right away is how steady he is with the puck and how reliable he is playing his position,” Parks commented. “While there might be players with more flash and who play with a high-risk, high reward mentality, (Trot) is very much steady Eddie on the blue line and that’s the kind of player the fans might not notice but coaches and GM’s love. You can go along time and not notice him and that’s a great compliment to defensive defenceman”

During both Picton’s prospect and veteran’s camps earlier this month, Davis was called upon to regularly play in both the first and second scrimmages and the GM said Davis’s stamina was noticeable.

“In speaking with other GM’s and coaches in the Provincial Junior Hockey League, defencemen are like diamonds right now-very tough to find and at a premium. To get an athlete like Trot who came to us in great physical condition and ready to compete really spoke to his love of hockey and commitment to the sport,” Parks added.

A number of Pirates players and prospects including regulars Cole Lavender, Reese Hancock, Nick Kirby as well as Ben Smith attended Wellington’s Identification Camp in Belleville this weekend. The Pirates will kick off their main training camp on Sunday afternoon at Lehigh Arena with eyes on getting up to speed for a prospects game against the visiting Napanee Raiders on Aug. 29 at 2:30 p.m.

“We are still working on details of that game,” Parks added. “While Ontario’s Stage 3 allows up to 600 fans in the stands at Lehigh, Hastings Prince Edward Public Health is still limiting ice surface activities to 25 participants. Hopefully there will be some uniformity coming from the provincial government. Right now in Cobourg and Kingston, teams can paly with full 20 player rosters.”