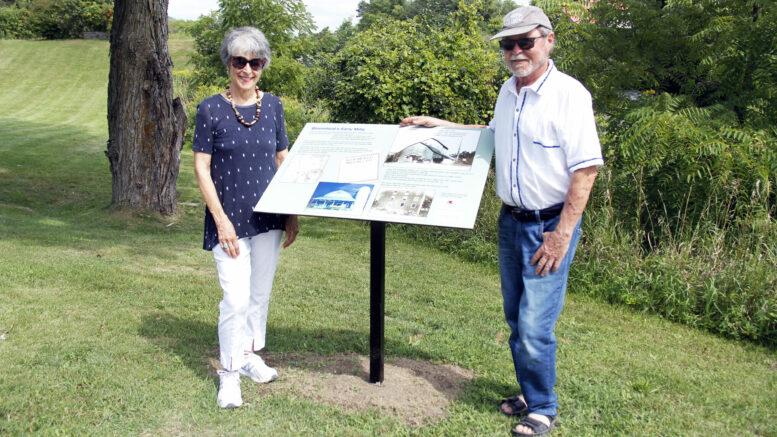 Standing with one of the eight Interpretive History Panels installed in Bloomfield recently (left) Barbara McMullen, one of the leaders in having the interpretive history panels installed, and did the research which provided the information on the panels, and (right) Rob Leek, past president of the Bloomfield and Area Business Association (BABA). (Desirée Decoste/Gazette staff)

A total of eight interpretive history panels have been installed throughout Bloomfield, depicting the settlement’s founding beginning in the late 1790’s and tracing the village’s growth through to the mid-to-late 1800s.

The panels focus on specific sites considered important to the growth of the village of Bloomfield, i.e. the Quaker Meeting House, the Bloomfield mills, the cheese factory, Saylor Block, Corey’s Hotel, canning companies, DeGroffe House, and the railroad stations.

A ninth panel will soon be installed in front of the Bloomfield Town Hall mapping the locations of the other eight panels.

“The plaques tell the story behind a number of existing buildings that are still here today,” Barbara McMullen stated. ” We see them now as local shopping locations and  very attractive for tourists but back in the days when Bloomfield was settled, it was very much more an industrial environment and the shopping area was more of a service area.”

The interpretive panels, along with the brochure ‘Heritage Walks in Bloomfield’ tell the history behind the ‘faces’ of many existing buildings and important sites in Bloomfield, enriching the experience of the village not only for visitors but for the residents of Prince Edward County.

“It’s an interesting contrast,” said Rob Leek, past president of Bloomfield and Area Business Association (BABA). “What’s going on now on main street with the boutique, sort of high end shopping compared to the history of the culture of the hard working community and the canning industry, as it was the driving force here for decades, everybody had somebody in their family stuffing tomatoes in cans. So it was quite a transition when that came to an end in the late 90’s.”

The Bloomfield Interpretive History Panels were made possible through the Prince Edward County Downtown Revitalization Initiative and were realized through the efforts and support of the BABA.

“Dorthy Fraleigh is amazing, she is the unofficial historian of Bloomfield,” Leek expressed. “When I moved here I wanted to know how old my house was and I couldn’t find anything in the archives so I went to Dorthy and she said ‘it was built in the ‘40s, I can tell you that because I was a little girl standing there watching them build it’. She just has a wealth of knowledge and she’s garnered it all in pictures and news paper clippings.”