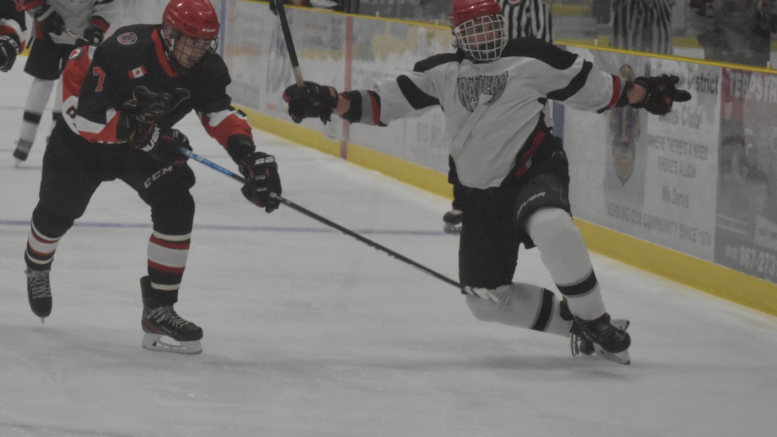 Picton Pirate Reese Hancock spills Napanee Raider Ethan Broek into the boards with a check during an exhibition game at Lehigh Arena on Sunday afternoon. The late summer tune up was the first junior junior hockey game with fans since March 12, 2020. (Gazette Staff)

A tie hockey game with just over five minutes to play might have given everyone associated with Picton’s Provincial Junior Hockey League club a reason to smile on Sunday. 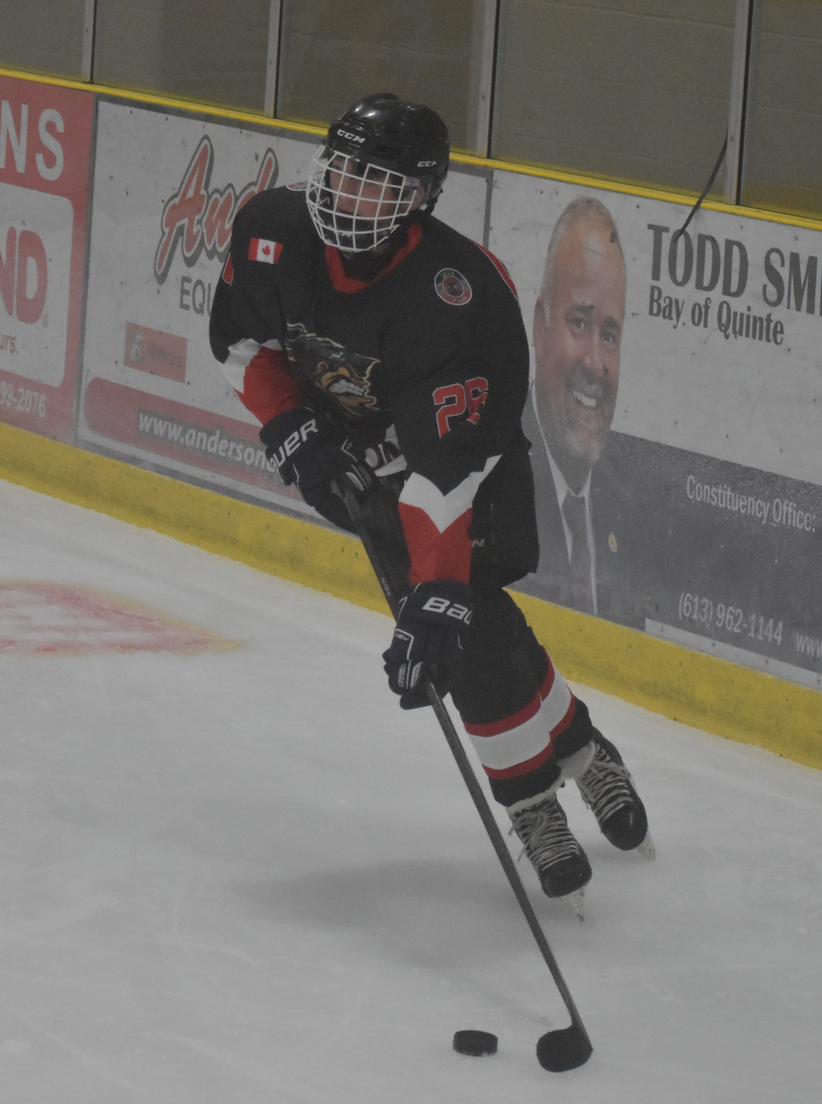 The Raiders would cash in twice in the late going to win the ‘game’ 6-4 but the afternoon was a resounding success for the young Pirates, their staff and the new club’s new volunteer executive.

Just under 100 hockeys fans attended the affair and Pirates General Manager Jason Parks was quick to credit the municipal staff and Directory of Recreation and Community Facilities Lisa Lindsay as well as the Pirates volunteers for making the day possible.

“From the development of our Return to Play plan to all the advice and correspondence we’ve had with the County, it’s been a very busy summer in addition to building this hockey team,” Parks said. “Without this level of cooperation with the municipality, I’m not sure we would have played Sunday.”

Under Stage 3 of the roadmap to reopening Ontario, fans were queued, screened and contact traced prior to entering Lehigh Arena.

Current calculations allow for up to upwards of 172 people in the facility to watch a hockey game.

“There will be wrinkles to work out in terms of processes but everything seemed to work like clock work and 100 people for an exhibition game on a hot day in August isn’t a bad tally for his organization,” Parks added. The volunteers were outstanding and we are hopeful to add a few more in the coming weeks as we prepare for our regular season.”

On the ice, the Pirates and Raiders made due with the restricted lineups of 12 skaters per side and the periods were 15 minutes to ensure injuries due to fatigue weren’t realized.

“Because of the length of the periods it couldn’t be really be called a ‘game’ but I think both myself and my colleague in Napanee Adam Bramburger were just happy to have a session like this as a dry run for what hopefully lies in store for 2021-22,” Parks said, adding he was advised well ahead of time by the Napanee braintrust their rivals might be short on actual prospects as opposed to signed Raiders but still took the opportunity to link up with the defending 2019 Schmalz Cup champions anyway.

With eight 2005 birth year players on their team, Picton got to work early and it was Joey Coates busting in on Napanee goaltender Logan Vale, knifing a backhanded effort into the Raider cage just two minutes into the contest.

Coates, a Belleville native who’s parents are both PECI alums, has been impressive to say the least in all of Picton’s skates thus far.

“He’s got County roots and he’s been one of our most consistent performers since our mini-camp in early August,” Parks said. “He may be a late bloomer but his development path is looking similar to some of the 16-year-olds we’ve had here in the past like Abbott Girduckis. In terms of size, they look similar although Joey is already a better skater than Girdy was at this stage.”

Girduckis is one of a number of Pirates that have gone on to play pro hockey and will lace up his skates for the East Coast Hockey League’s Jacksonville Icemen later this season.

The Pirates extended their lead at the 3:21 mark of the first when Ben Smith-wearing his uncle, former Pirates captain Donald Bartman’s #15-  followed up on his own rebound and slipped it past Vale to make it 2-0.

Fellow County King Gerrit Kempers picked up a helper on the scoring play.

The Pirates were nearly out of the period unscathed but the Raiders pressed the attack late and Matt Sheehy’s deft tip of a Johnny Wright blast 15 feet out from the blue paint ricocheted past Pirates starter Nolan Lane with 35 seconds left.

Early in the second, Lane was left to his own devices and it was Sheehy that was able to bang home a loose puck on the goal line to draw it to 2-2.

Pirates coach Kyle Hawkins Schulz said Lane turned in a fine effort, allowing just two goals on volleys he had virtually no chance on while fending off the Raiders when the veterans were able to hold the zone and extend play in the Picton end.

“He really held us in there in the first when Napanee was pushing to get back in the game,” the coach noted. 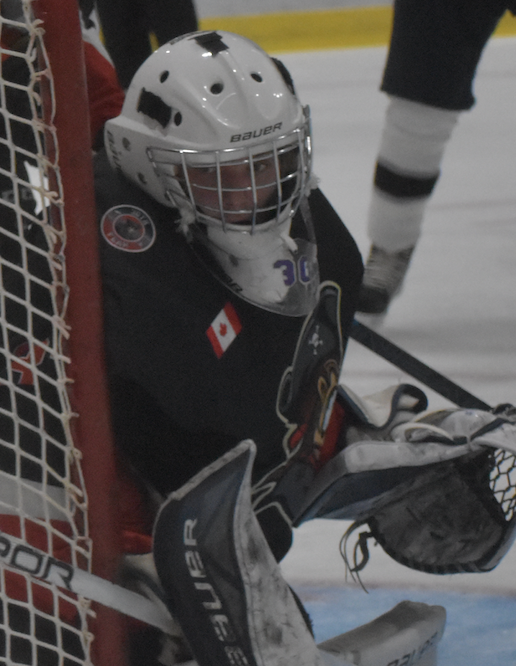 Picton turned the duties over to Noah Beaulne halfway through the second frame and the Raiders would take advantage of a mob scene in the slot as Cole Campbell’s seeing eye shot from the blue line clanked off the post and in the net at the 4:29 mark.

Down a goal, the Pirates were able to even things up when Cole Stevenson burst past a Napanee defender and in alone on Vale.

“We’ve been incredibly pleased with Cole so far,” Parks said. “He’s not our biggest forward but he’s deceptively fast and has a great release. Every time the puck comes off his stick, you think it’s a big defenceman taking a heavy shot.”

A bad give away in the Pirates end with under a minute to go made sure the Raiders would go to the dressing room up a goal as Rheydon McCoy’s blast tickled the twine with 40 seconds left.

In the third, the Pirates would again tie up the contest by showing determination around the Napanee net.

Kempers would convert a Reese Kleinsteuber feed at the 12:48 mark to make it 4-4 and the contest stayed there for over nearly six minutes.

Finally, the tie was solved as Napanee’s Ethan Broek snapped home a quick blast from the half wall that made its way past Beaulne.

Just under two minutes later, Napanee would salt the game away with a Colby Leaver effort.

Picton did dress a pair of veterans and Parks was complementary of their efforts.

“Coming out of that game, I couldn’t say enough good things about Ian Harrison and Reese Hancock,” the GM said. “Our line up was pretty green and the Raiders looked like a team that was very happy to have physical contact back in the PJHL. Harry and Reese answered the bell a number of times and did a great job of keeping the other side honest.”

The Pirates host the North Kawartha Knights on Thursday, Sept. 9 at 8:30 p.m. at Lehigh Arena.

Parks said if required, the club would adhere to the rules of having 12 skaters per bench area.

“We were informed that we can play full 20 player, 60 minute games in Napanee and Amherstview as a result of Kingston, Frontenac, Lennox & Addington Public Health and the municipalities getting together and coming up with a solution for the junior hockey clubs in that catchment area. We are hopeful to be the next ones in that chain of logic but we are preparing for both eventualities,” Parks said.