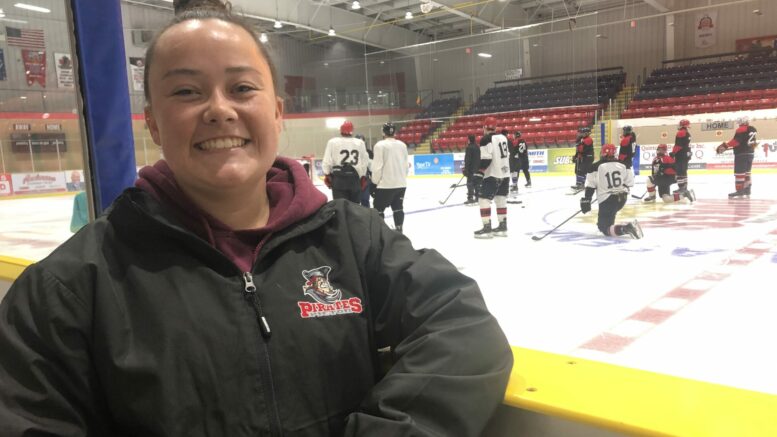 Picton resident and Queen's honours grad Lindsay Stakes has been tabbed to be the next trainer for her hometown Pirates. (Gazette Staff)

In addition to adding players to the lineup and preparing for the upcoming 2021-22 Provincial Junior Hockey League season, the Picton Pirates are also in the process of adding their bench staff and assigning volunteers to new and expanded roles.

On Sunday as Pirates prospects and veterans put in another lengthy session in attempts to wear away 18 months of rink rust, another fresh face was taking stock in the club’s trainer’s bag and making her in-person introductions to her fellow bench staff and the Picton executive.

Picton resident Lindsay Stakes is taking on the role of serving as the Pirates head trainer in 2021-11.

The PECI alum who graduated in 2017 is no stranger to competitive athletics and the injuries that come with sport, having participated on the Panthers Gymnastics team where she won three provincial gold medals.

While she was attending PECI, Stakes also competed provincially in gymnastics out of the Greater Napanee Gymnastics Club and it was the love of sport combined with overcoming the wear and tear that can keep athletes on the sidelines.

“After graduating PECI I attended Queen’s University to complete my Bachelor of Science (Honours) with a Specialization in Kinesiology degree,” Stakes said.  “I was drawn to work in a sports and rehabilitation setting based on my previous experience competing in sports. I wanted to stay involved with sports as much as possible while being able to help athletes through their injuries, as it’s something that I had experience with as a gymnast.”

With a new bench staff coming on board the Pirate ship, previous trainer Keith Tyers decided this summer was the natural time to step away from the club and his duties as Picton’s trainer for the last handful of seasons.

“We’re always indebted to the great people who undertake the vital responsibility of the health of our players and we thank Keith for his time and his efforts,” Picton Pirates General Manager  Jason Parks said. “It’s a very time consuming job and it’s one people take on because of their love of sport and supporting athlete’s goals.”

Without a trainer for the upcoming season, Parks pestered a few people in the know amongst the small junior hockey world and it was Wellington Dukes Head Trainer Leah Tofflemire who knew of Stakes and thought the local PJHL team might benefit from her knowledge base.

Stakes said being a trainer for a sports team is something she has always had an interest in as it allows her to stay involved with sports.

“I would like to go back to school to complete a Masters of Physiotherapy with hopes of one day getting a chance to work with a professional sports team or a national team,” Stakes added.

The new Picton trainer actually job shadowed Tofflemire while studying and received a first- hand glimpse of the dedication one of the best trainers in Canadian Junior A hockey has for her position with the Dukes.

“It is extremely inspiring to see what Leah has been able to accomplish with Wellington in the Ontario Junior Hockey League. Athletic therapy, especially in male sports, is usually a male dominated field and to see what she has been able to do for the team and it’s program is amazing,” Stakes added. “I have had the opportunity to shadow Leah at games in the past and she will definitely continue to be a resource for me going forward.”

The GM mentioned that it was Stakes’ alma matter that sealed the deal with the Picton Pirates Executive.

“I think once Lindsay showed up in a Queen’s sweater, Secretary and fellow Queen’s alumnus Dr. Cliff Rice said she was a perfect fit for the organization,” Parks said with a laugh.

Stakes is currently  working at Picton Physiotherapy and Sports Injures Clinic as a Physiotherapy Assistant and is also working towards writing her registration exam to become a Registered Kinesiologist.

The Pirates host the North Kawartha Knights on Thursday night as they continue their 2021 preseason schedule.

Originally a 7:30 p.m. puck drop, the game has been moved to 8:30 p.m. to accommodate minor hockey pre skates.

On Saturday, the Pirates will participate in the 2021 Picton Drive Thru fair from 9 a.m. to 5 p.m. and then travel to Port Hope that evening to take on the Panthers at the Jack Burger Sports Complex.