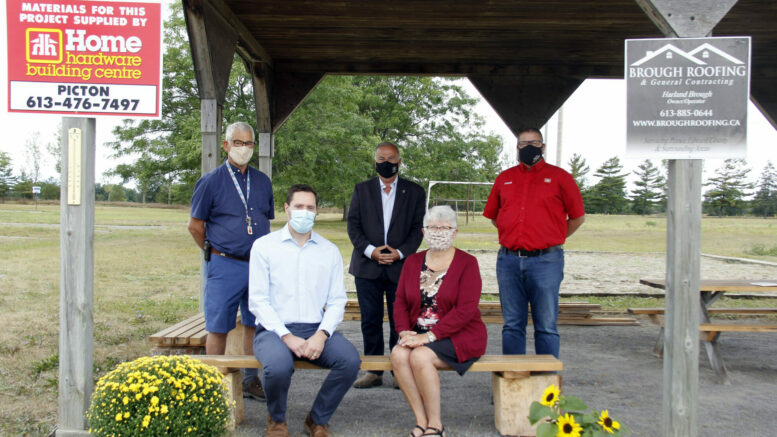 THE LOVE OF SONG (back left) Board member Ken How, Neil Ellis, MP for Bay of Quinte, Adam Busscher, Manager Home Hardware, Picton, (front left) Development Manager Andy Spry and Board member Donna Rodgers pictured under the pavilion with the new roof, on the LoveSong property. (Desirée Decoste/Gazette staff)

The LoveSong Housing Team announced on Friday the most recent progress on the LoneSong Affordable Housing Project at the old Pinecrest Memorial Elementary School in Bloomfield.

The LoveSong Housing Project is an independent non-profit housing project originally spearheaded by Emmanuel Baptist Church in Bloomfield and volunteers from Prince Edward County. The team consisting of Donna Rodgers, John Uings, Paul Robinson, Ken How, Andy Spry, and countless others, would like the community to know of their accomplishments in the last few months.

“Emmanuel Baptist is the one that started this project,” expressed Rodgers. “What happened is, they had a group of people that were helping people move in the community and they were shocked and astonished at some of the homes that people had to move into in the apartments, they were so substandard and they’re more dangerous and unsafe. And so they came back and decided we’ve got to do something about this and thats what started the roll with doing something about affordable housing for seniors in particular.”

One of the teams accomplishments include a beautiful new red steel roof on the pavilion which was generously donated by Picton Home Hardware’s Adam Busscher and installed by Harlan and Dominick of Brough Roofing.

Another accomplishment includes, the renovation of the building getting a huge boost by a team of five student summer workers funded by the Federal Government Canada Summer Jobs Program. The workers spent 1,300 hours clearing out the building in preparation for the next stage of renovating the classrooms into 50 affordable co-housing units.

“So this is a co-housing model,” Rodgers stated. “It’s not a nursing home and its not a retirement home, people have individual apartments but because its co-housing you have to have some common areas and were planning on setting things up for things like wood working and a spot for people to do crafts together or play games or do exercises together, those sort of activities.”

The LoveSong Team are also pleased to announce they were successful in their application for Federal SEED funding from Central Mortgage and Housing Corporation. These funds will assist in obtaining the required completion of the design drawings which include a commercial kitchen, medical and or office centre, and community hub for recreation and sports, which will be open to the public. This will be stage one of multiple phases of buildings on the 20-acre property.

“We were at about 20 dumpsters of materials we took out of the building,” said How. “But that was after 20 or 30 truck loads of stuff went out that people came and got like white boards and blackboards and sinks. It was all given away but donations were accepted by Lovesong. So we collected a couple thousand dollars worth of donations for the materials that got extracted out of the school.”

Under the management of Springale Development, great care is being taken to employ a low carbon footprint by installing energy efficient solar power and gray water recovery, all in an attempt to implement the 3 R’s (reduce, reuse, recycle) in this adaptive reuse project.

For more information on the project or to donate please visit https://www.lovesonghousing.org