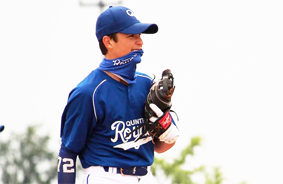 ON TOP Mitchell Sills of Wellington was the winning pitcher on Sunday afternoon as his U14 Quinte Royals won the 2021 EOBA championship in Northumberland. (Submitted Photo)

A Wellington native is a big reason why the Quinte Royals U14 Ontario baseball club are the 2021 Eastern Ontario Baseball Association champions.

Whether it was in the batter’s box or toeing the rubber on the pitcher’s mound, Mitch Sills was a big factor in the team’s winning weekend.

The Quinte Royals U14 baseball team entered the 2021 EOBA Championship tournament as the top seed after going 5-0 to finish regular season.

The Royals opened the weekend with a Friday night game with the Ajax Spartans. Bryce Mitchell started on the mound for Quinte and pitched 3 and 1/3 innings with three strike outs and allowed just four hits on 46 pitches. Every Royals player reached base as Quinte stormed through Game One. Sills, Cole Baird, and Jake Briscoe all went 2-3 at the plate and each scored a run. Ben Demille, Bryce Mitchell, Marcus Forbes, Colin Stephens, Christian Fonger, CJ Kerslake, Colby Coe, and Owen Ferguson all had a hit and a run scored. Mitchell turned the ball over to Colin Stephens who closed out the remaining innings on 16 pitches, giving up just one hit. The Royals played great defense and capitalized on walks to take the opener 15-5.

Next up for Quinte was the Pickering Red Sox at noon on Saturday. Nathan Soules got the ball for the Royals. Quinte attacked with aggressive baserunning and rode an airtight defense behind Soules who went five innings, punching out five while allowing 3 hits and 4 walks. Marcus Forbes was 2-3 with 2 RBIs. Briscoe, Baird and Coewerr 1-3 with and RBI each. Demille, Stephens and Kerslake each had a hit to drive in a run and the Royals scattered 14 hits on their way to a 14-1 victory and a date with the Whitby Canadians at 6 p.m. Saturday.

Oliver Brackenbury took the hill for the Royals in a pivotal Game Three as the winner would receive a bye to the Sunday final. Both teams were undefeated at this point. The Royals started slow, but exploded for 9 runs in the 4th inning.Colby Coe was 2-3 with 2 runs scored and 3 stolen bases. Sills was 2-3 with an RBI. Christian Fonger went 2-2 at the plate with 3 runs scored and an RBI. Colin Stephens was 1-2 and scored a run. That was all Brackenbury needed as he dominated through the five inning mercy, allowing just three hits and striking out five Whitby hitters on 76 pitches.The Royals win came across home plate a dozen times in a 12-0 whitewash and moved on to Sunday’s final.

After eliminating Whitby, the host Northumberland Jacks earned a spot in the final and a date with the red hot Royals. The Jacks and Royals met three times in the summer, with the Royals taking 2 of 3 games. Every game was close and all were decided by just two runs. With a championship hanging in the balance, the Royals sent Sills to the mound to start the final.

Northumberland drew first blood in the 2nd inning and added one more in the 3rd. But in the home side of the 3rd inning, the Royals started a 3 run rally when Bryce Mitchell hit a lead-off double. With 1 out Cole Baird’s double pushed Mitchell home. Briscoe, and Coe drew a walk each before Baird stole home on a passed ball. Colin Stephens came up big with a 2 out single, scoring Briscoe to give the Royals a 3-2 lead after 3 innings. Sills kept the Jacks hitters pinned down through the 4th and 5th. The Royals added 1 more in the 5th to go up 4-2. After a highlight reel catch by CJ Kerslake with two Jacks on base to end a threat, the Royals turned to Cole Baird to close the door. It took Baird just 7 pitches to lock down the 4-2 victory for the Royals.