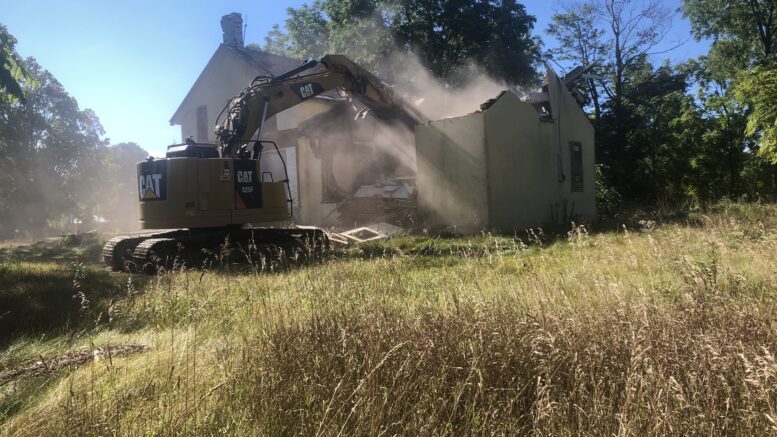 GONE IN A CLOUD OF DUST- A firm contracted by the Ministry of Environment, Conservation and Parks levelled the Hyatt house at Sandbanks in September, 2021. (Jason Parks/Gazette Staff)

The decision by the Ontario government to demolish a pair of derelict but historic homes located within Sandbanks Provincial Park is drawing outcries from local heritage groups, the Architectural Conservancy Ontario and others.

A firm contracted by Ontario Parks razed the 1878 MacDonald and 1869 Hyatt/Gray homes Thursday morning despite strong opposition from the County of Prince Edward, its Heritage Advisory Committee, other local organizations, residents, and visitors.

The Hyatt and MacDonald houses were built in the mid-1800s and operated as early tourism lodges, pioneering an industry that has become a mainstay of the area. Although originally destined for restoration in the park’s management plan, park officials amended their plan in 2020 to allow for demolition arguing the buildings were a hazard to public safety and beyond repair.

After 40 years of neglect by the park, the buildings certainly needed work. But like many properties in Prince Edward County  that have been successfully restored and re-purposed for new lives, the two historic homes could readily have been re-imagined as added accommodations, restaurants, cafes, shops, galleries and exhibit spaces to enhance the experiences of park visitors and residents. Over the last year, municipal officials and community organizations have repeatedly requested an onsite meeting with park officials to explore creative alternatives to demolition. These requests were ignored, although the Ministry has suggested a meeting – after demolition – to discuss commemorative plaques.

SHSH was apprised last week in a letter last week from the Ministry of Environment, Conservation and Parks  demolition would move forward. In the correspondence, the ministry stated the homes were not worth saving despite reports from local heritage architects the buildings were of distinct historic value and could be restored without incurring taxpayer dollars. The ministry had countered that even if private funding were to be secured, “Ontario Parks would still incur annual costs for operating and maintaining the buildings.” 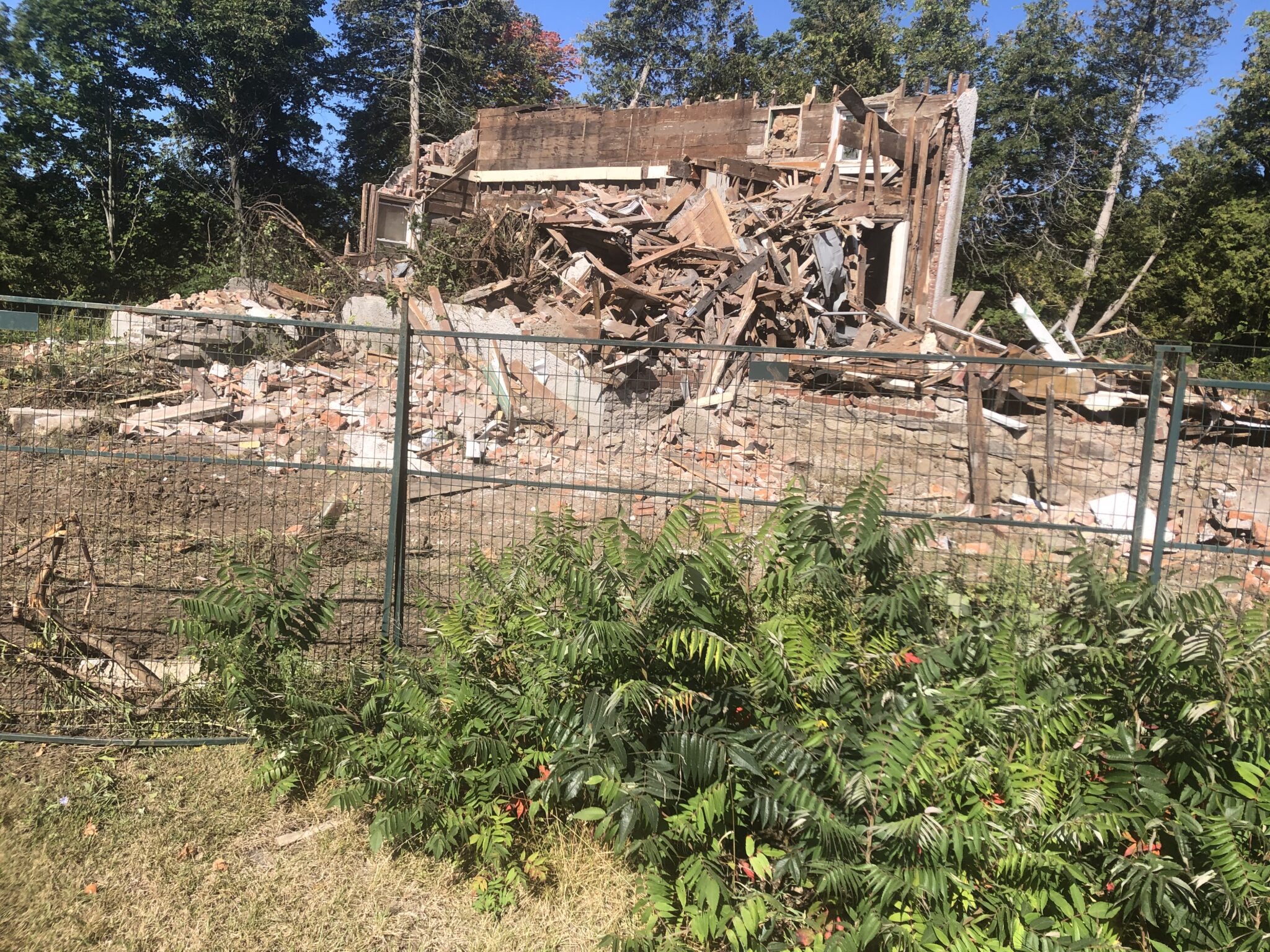 In a statement, Architectural Conservancy Ontario (ACO)’s President Kae Elgie said the organization was “shocked and appalled” learn of the abrupt and needlessly brutal destruction at the park Thursday.  Hundreds of citizens across Ontario, led by the Save Heritage Sandbanks Homes Inc. (SHSH) volunteer organization, the local municipality, ACO and others had appealed to the Minister of the Environment, Conservation and Parks to pause the scheduled demolition of the 1869 Hyatt House and 1878 MacDonald House to hear proposals from heritage architects for the cost-effective renewal and repurposing of the buildings.

“Leaving aside the arguments and counter-arguments as to whether these buildings were first-class heritage, the wanton destruction of these irreplaceable building materials is reprehensible,” said Kae Elgie, Chair of ACO’s Board of Directors. “The bricks, old growth timber, interior trim are all highly prized and sought after by heritage property owners and could have been salvaged, sold and reused, she said.

“Instead MEPC wracks up landfill fees. This Ministry does not deserve to have Conservation as its middle name,“ Elgie added.

On the ground in Prince Edward County, SHSH worked a number of angles through court injections and attempts to reach through Ministry bureaucracy to explain why the homes should be saved and rehabilitated. While the group and their allies were able to stave off a scheduled demolition earlier this spring, the backhoe toppled the homes and Thursday as dust from nearly two hundred year old timbers being snapped like kindling wafted in the westerly wind.

“This week’s demolition of the Hyatt and MacDonald houses by Ontario Parks was heart-breaking, unnecessary and unforgivable,” said SHSH’s  Liz Driver. “Despite the community’s clear desire for a dialogue with Ontario Parks officials and staff at Sandbanks Provincial Park about a new future for the houses, they refused to listen or to engage with their County neighbours. The result? The irreversible loss of two significant buildings – the 1869 Hyatt House, and the 1878 MacDonald House – and a seriously damaged relationship between the community and Sandbanks Provincial Park.”

SHSH says this demolition highlights longstanding issues between the park and the local community.

Both properties were part of an expropriation process in the 1970s to establish Sandbanks and, with some exceptions, historic landmarks such as Lakeshore Lodge were left to deteriorate. Vandals ultimately had the ultimate say on the historic lodge in an act of arson.

Driver also pointed to a bone of contention the community holds regarding the busy Provincial Park installations in Prince Edward County  as they operate as independent entity within the municipality.

“While its over 700,000 annual visitors bring significant economic benefits to the community, they also bring other issues such as congested roads, garbage and noise that have many residents feeling the region is “over-touristed,” and local council asking to meet with park officials to explore a new partnership and financial arrangements,” she noted.

In September 2010, an historic 1875 former Methodist Church on Main Street was demolished on a Sunday morning as astonished residents watched in horror. The loss of that iconic building was listed as one of the top 10 worst heritage losses by the National Heritage Trust of Canada. Today the site remains a weedy, vacant lot – a heritage crime scene. This heritage loss led to the creation of the Picton Heritage Conservation District. Another district in the nearby village of Wellington is planned. And most of all, it prompted a new, renaissance era in the community where restoration has replaced demolition. Many old properties have since been successfully transformed into viable businesses while retaining the community’s deep commitment to its heritage.

“Heritage is a finite resource. And it is not free. It has come at a great cost to those generations who came before us. We have a responsibility to be stewards of the past in our time,” says Driver. “The officials of the Ministry and Sandbanks Park are out of tune with this approach and this community. They were not interested in imaginative opportunities to restore and re-purpose these heritage properties to meet visitor needs, while respecting the will of residents and our local government. We have no knowledge of their plans or vision for what are now dusty, vacant lots. We’ve lost more than buildings in the demolition. We’ve lost an opportunity to create new partnerships and possibilities. It is a tragic decision.”

Driver adds she is grateful for the support of the Mayor and local council, the Prince Edward Heritage Advisory Committee, the Prince Edward Historical Society, the Architectural Conservancy of Ontario, and the many residents and visitors who participated in the campaign to save the Hyatt and MacDonald properties.