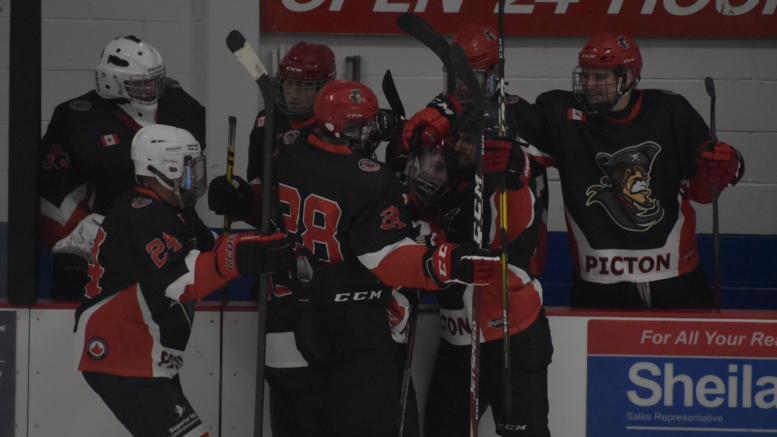 Teammates mob Brayden Adams after he scored a breakaway goal in the second period of Saturday's 4-3 preseason win in Port Hope. (Gazette Staff)

The Picton Pirates made it a two-for-two weekend in their 2021 PJHL preseason schedule but waited until the final minute of their game Saturday night in Port Hope to do it.

An unsuccessful Nate Boomhower wrap around attempt off the rush was left lying in the crease with 61 second left in a 3-3 game at the Jack Burger Sports complex.

Trailing the play, Brayden Adams potted his second of the night to push Picton ahead 4-3. The locals, coming off a 7-4 win at home Thursday night over North Kawartha, were able to hold off the host Cats in the final minute to preserve the win.

Pirates Head Coach Kyle Hawkins Schulz said it might not have been the prettiest win and preseason victories hardly ever are however the club stuck to the game plan and the mix of veterans and rookies were able to push through.

“It took us a while to get going and find our game but once we did, I thought we are as advertised,” the Coach said.

Picton wound up being down 2-0 after twenty and didn’t give much help to starter Nolan Lane on either Panther goal. 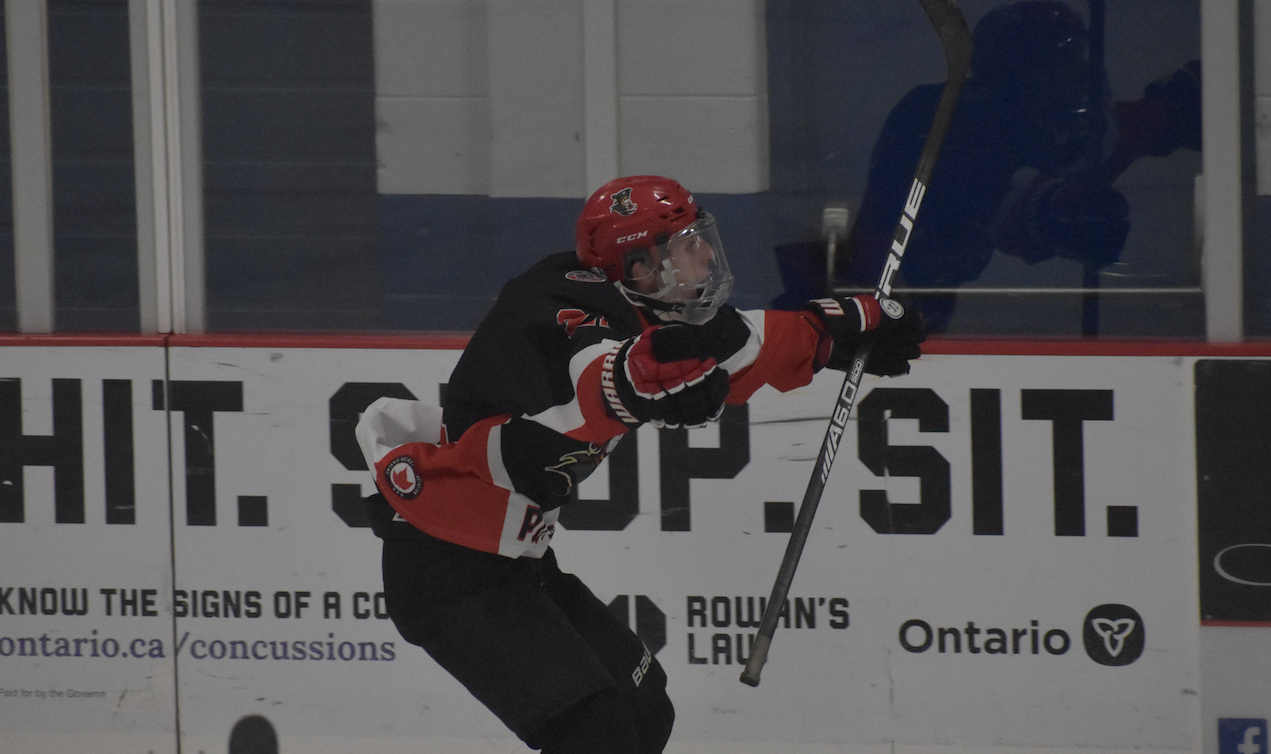 On a power play seven minutes into the game, a bouncing puck on the Port Hope blue line led to a two-on-0 breakaway as Evan Wright set up John McKinney at 13:02 for a 1-0 lead.

With under a minute left, Wright was sprung for a breakaway and made no mistake, putting the Port Hope lead up to a pair of goals to Picton’s none.

In the second, Picton was able to settle down on them and advantage and showed some mid-season form as Derrick Vos found Boomhower at the side of the Port Hope net.

With a deft no look pass, Boomhower found Nate Brant lurking at the far post and a one time effort to beat Adian Thomson at 13:31.

Another breakdown in the Picton end just under a minute later allowed McKinney to restore a two goal cushion.

But Picton battled back and it was rookie Ben Smith taking the puck wide past a Port Hope defender off the rush before angling to the net and slipping an effort through Thomson at 11:20 of the second to make it 3-2.

The 2005 birth year has three goals in three preseason games and has impressed Pirates staff with his commitment to get better at practices and games thus far.

“If Ben’s not careful he might make a hockey team,” Pirates General Manager Jason Parks said with a laugh.

The Pirates finally came all the way back in the late stages of the middle farm when blueliner TJ Strachan hit Adams with a home run pass.

The veteran Pirates forward who is looking to have big season with Picton in 2021-22 walked in alone on Panthers net minder Ryan Mendelson and riped a low volley into the Port Hope net at 6:24.

“I kind of knew the commitment Brayden had to the organization and the game of hockey before this season but he’s really come in and been a great worker for us so far,” Parks said. “When we’ve been shorthanded, he’s taken regular shifts on defence and he’s also a scoring threat. He’s done everything we’ve asked and more.”

Both teams exchanged netminders midway through the period  and Picton’s Tyler Wortman came up with a few solid saves in the third to preserve a 3-3 tie.

If he cracks the Picton lineup, Wortman would be the second Burk’s Falls resident to play for the Pirates, the first being former captain Cale Evans who starred for the club back in 2008.

Wortman worked out with the Timmins Rock Jr. A club last winter and that pedigree of facing NOJHL shooters is evident.

“Tyler has family in Prince Edward County and the Belleville area so he’s relocated to the Quinte region and he’s done very well so far,” Parks said. “The Pirates are really interested to see what he can bring.”

The game stayed tied through most of the second until Adams pushed the locals ahead for good in the 59th minute.

On Thursday at Lehigh Arenas, the Pirates were able to overcome the North Kawartha Knights 7-4 in a chippy affair.

“In 2020, the Knights were a team that had Schmalz Cup designs, especially with County boy and former Pirate Justin Arnold leading the way, “ Parks noted. “On Thursday, they veteran lineup that seemed to want to take out the frustration of not being able to complete their journey and their General Manager John Johnson said as much to me. That was a pretty intense game for their first of the preseason but it’s also a good eye opener for our rookies as to how heavy this league can be.”

An inter-division tune up between the Orr’s Knights and the Pirates of the Tod circuit, the Knights looked ready to defend their 2019-20 Division title in their first game of the preseason, dressing a number of veterans including club captain  Arnold.

Picton also went with a more veteran line up in it’s second game of the exhibition schedule and it was returning captain Devin Morrison opening the scoring with a nice tip of a Brant shot at the goalmouth just over five minutes into the game.

Morrison would set up Picton’s second goal about seven minutes later when he sent Boomhower in on a one-on-one rush. The big Picton power forward showed some nice moves, getting past the Knights defender and depositing a backhand tuck past North Kawartha starter Noah Beaulne.

The Knights battled back and it was Arnold potting a power play goal before the visitors also managed to count a shorthanded marker to make it 2-2 at the end of one.

In the second, Picton pulled away as Joey Coates would snipe his first of two in the frame just half a minute in as he took advantage of a partial breakaway and made it 3-2.

Boomhower’s second of the game came at 15:39 mark off a nice pass from Gerrit Kempers and then Smith cashed in the eventual game winner just under a minute later off a Nolan Dawson pass.

Adams powerplay goal past the half way mark provided Picton with some insurance that was put to good use as the Knights pushed back with a pair of their own.

Coates converted a Cole Stevenson feed at the 3:00 minute mark to move the score to 7-4.

An uneventful third saw neither team find the back of the net.

Wortman picked up the win in his Pirates debut.

Picton returns to Lehigh Arena on Thursday when they host the Amherstview Jets at 8:30 p.m.

Fans are welcome to attend and admission is $5.