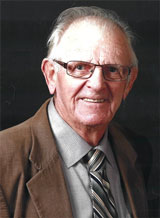 Piebe (Peter) Kempennar
Born in Burdaard, Friesland, Netherlands on April 21, 1930, the eldest son of Sjoerd and Jikke Kempenaar and he died peacefully on September 16, 2021 after a brief hospital stay. Dad married our Mother Theda (Tietje) Kempenaar in October 1953 and then immigrated to Canada, first settling in Lethbridge, Alberta and later moving to Prince Edward County but he always remained a proud Frisian. Dad was left lonely after our mother passed in 2009 but we are thankful he was able to love and be loved by a wonderful lady, Dini Terpstra. Dad lived and taught us the importance of believing in God, the love of family, to work hard and to enjoy life. He felt that being bored was an insult to a person’s intelligence. Dad worked as a carpenter having his own business for many years. During retirement, Dad and Mom had a store where they sold many items including Dad’s famous birdhouses and cement ornaments. Until a few weeks ago, Dad continued to enjoy his favourite hobbies of fishing, gardening and making and selling birdhouses. Dad’s hobbies throughout his lifetime are too numerous to list but we all have special memories of spending time in his boat fishing with him, enjoying his gardens and walking through his ‘Museum’. He loved to spend time with family and when he married Dini embraced his new family without reservation. He kept us all entertained with his embellished stories and sarcastic wit. As children we would frequently hear him say, “Too bad I wasn’t born rich instead of so darn good looking’ but in later years he often said he was the richest man on earth because of his children, grandchildren and great grandchildren. And he was very excited to meet his newest great-grandson Mateja Piebe in July. He will be missed by his wife, Dini, his children George, Janet & Mark Myers, Brenda & Steve Greydanus, his grandchildren Valerie & Kevin, Chris & Danijela, Kathy & Kendall and Philip & Cathy and 8 great grandchildren – Mackenzie, Willow, Aaron, Genevieve, Leo, Mercedes, Cambria and Mateja Piebe, his step-children Debbie & Darren, Harvey, Rick, Rob & Joanne, Dave and Chris & Kristen, step-grandchildren – Brittany, Cameron, Alex, Taylor, Shelby, Zachary, Abby, Brady and Bennet, step-great-grandchildren Zayden, Bentley & Lennon. Also survived by ‘the best sister he ever had’ Henny & Bill Huiskamp, brother Gary & Sandra, sister in laws, Anne Kempenaar and Wilma Kempenaar, Herman & Violet Kamink, Ben & Julia Kamink, Dirk & Marjorie Kamink, Ben & Dena Kamink. He will also be missed by many nieces and nephews. Pre-deceased by his first wife Theda, infant son George, brothers Willem, John and Paul. 4 brothers-in-law and 4 sisters-in-law. Mr. Kempenaar rested at the Whattam Funeral Home 33 Main St., Picton. Funeral Service in Bethany Christian Reformed Church on Monday September 20 at 10:30 am. Pastor Bruce Adema officiating with Pastor Larry Snider. The family received friends on Monday from 9:30 am. until service time. Interment at West Lake Church of Christ Cemetery. To view the LiveStream of the Funeral Service in the Church, please visit: youtu.be/52KEly7zNRU Memorial donations to PECMH Foundation ‘Back The Build’ or Sonrise Christian Academy would be appreciated. Online condolences may be left at www.rushnellfamilyservices.com