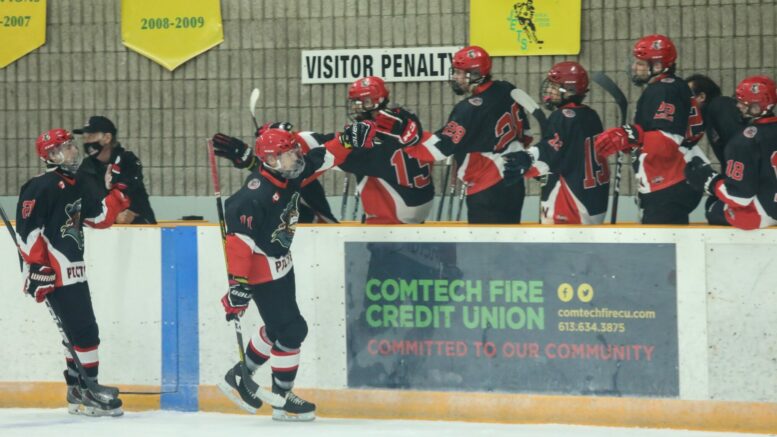 Jack Dow leads the goal train after opening the

If preseason hockey is about a team’s self discovery and slowly getting better each game, then the Picton Pirates had a productive weekend.

The locals were able to sandwich two productive outings against the Amherstview Jets around a loss in North Kawartha on Saturday afternoon.

Picton took a 3-1 lead into the final minutes of their home game at Lehigh Arena only to have the Jets come back and win in overtime Thursday night.

On Saturday, the club gave up four goals in a seven minute span against the Knights in a 6-2 setback in Apsley. 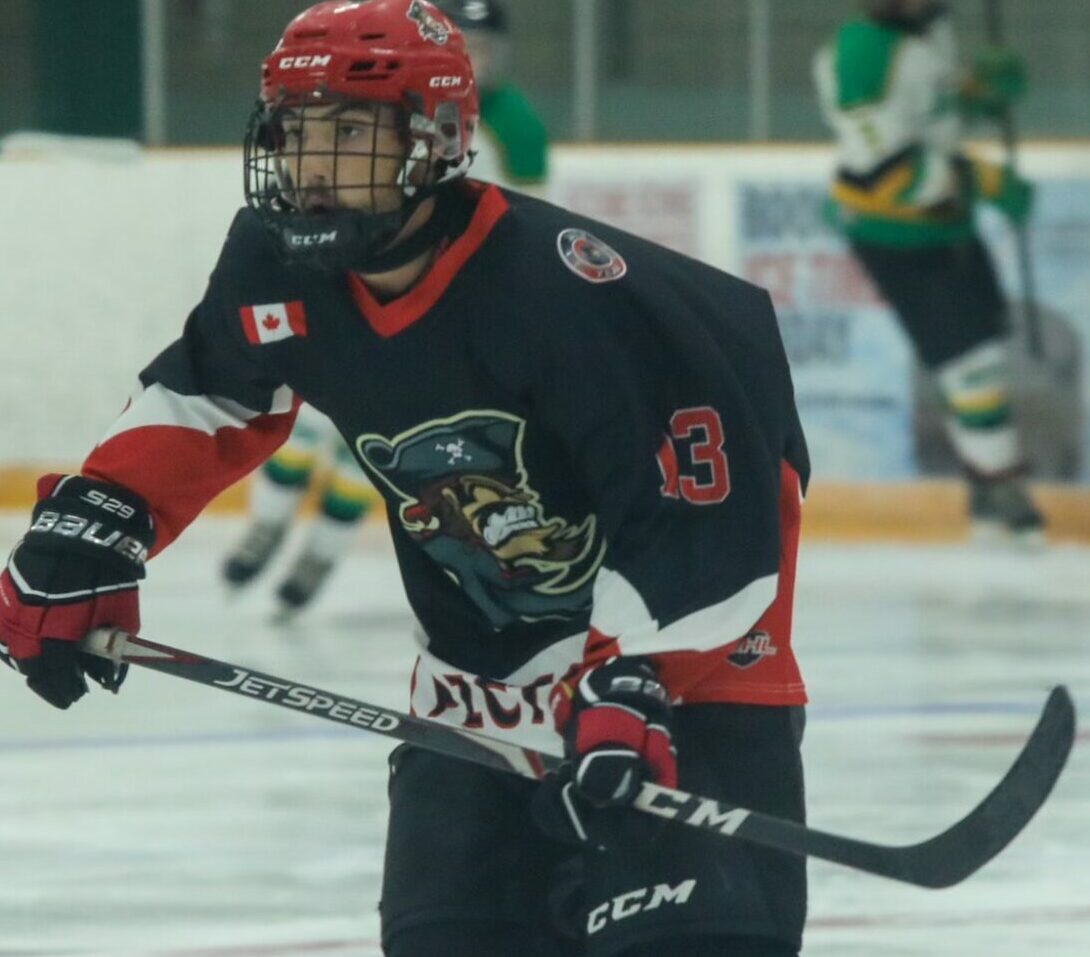 But on Sunday, the Pirates weren’t content to sit on a three goal lead and managed to down the Jets 5-2.

The weekend ran Picton’s PJHL preseason record to 3-2-1 with games against Port Hope and Napanee left on the exhibition slate.

“There were a lot of scrambles at times and we weren’t sharp on the back end but Tyler Wortman came up huge for us,” Hawkins Schulz said. “Just being able to keep things calm and steady is huge when you are trying to find your game.”

Wortman made over 40 stops in the contest as Picton was without Derrick Vos on the blue line.

The Pirates got off to a great start as Jack Dow rifled a puck past Jets starter Jeremy Piazzi at the 13:44 mark to stake Picton to a 1-0.

Devin Morrison found Owen Dever streaking to the slot with under two minutes to play in the opening stanza and the overager’s first of the preseason double Picton’s lead to 2-0.

A defensive breakdown early in the second helped the hosts get on the board as Jack Kaufeldt found Nico Deachmann in the slot for a tap in goal 1:47 into the second.

Picton would wait until the final minute of the frame to restore its lead as Morrison found Noah Brant on the doorstep of the crease for a tap-in with 10 seconds left in the stanza.

Picton pushed the lead to 4-1 in the third when rookie Ben Smith spotted Brayden Adams and the Picton pivot shovelled home an insurance marker.

Midway through the frame, Dawson Frost picked off a pass in the Pirates end and walked in alone to beat Wortman clean at 11:15.

Having been burned with a two goal lead, the Pirates continued to be strong on the forecheck and it was Reece Hancock busting in alone on Piazzi and firing a dagger with just under four minutes to go to salt the game away for the locals.

On Saturday, Picton might have put self-preservation ahead of preseason productivity and head to North Kawartha Highlands with a slightly greener squad.

“At a certain point of the preseason we have to start thinking about load management versus preparedness for Oct. 1 and the regular season,” General Manager Jason Parks said. “It was the perfect time to get some skaters into the lineup that were weren’t able to see in mini camp and I think they appreciated the opportunity.” 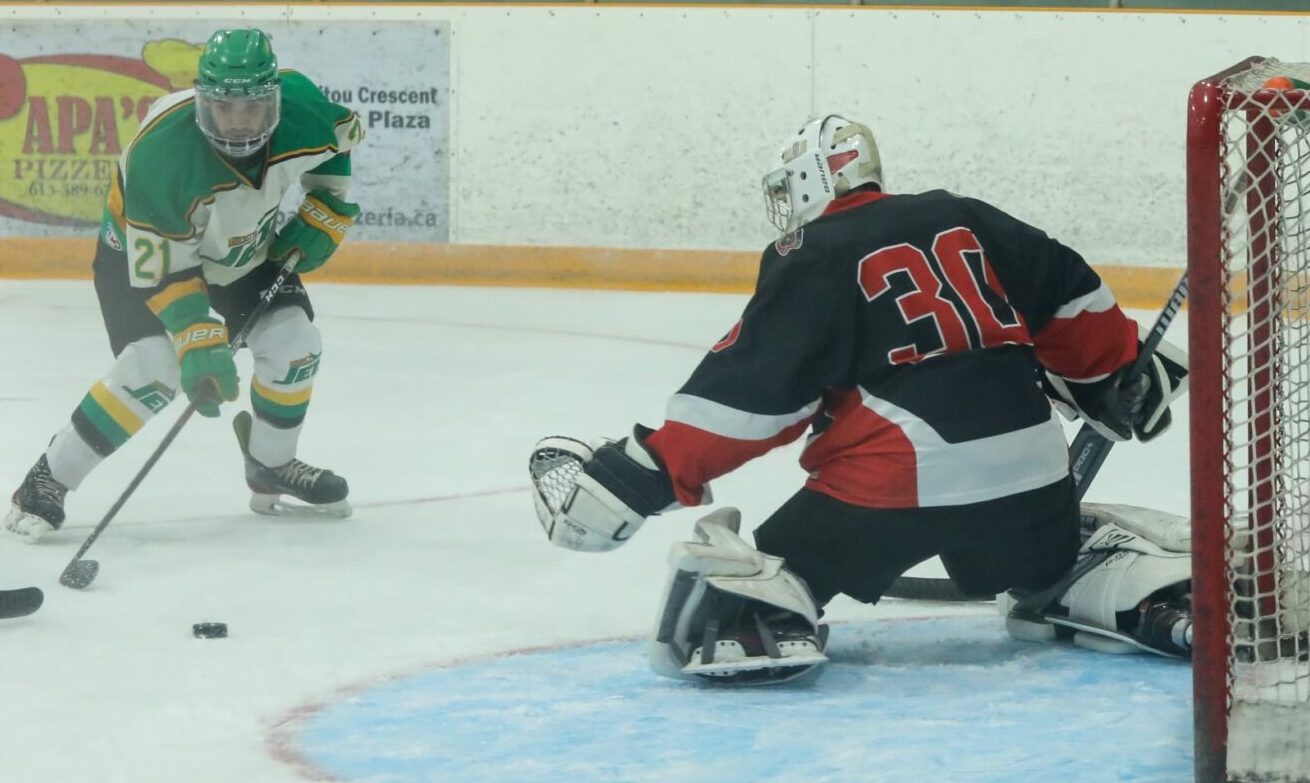 Pirates starter Nolan Lane was left to his own devices for much of the first period as the Knights built a 4-0 lead through the opening period.

In the second, it was the Pirates turn to get into the scoring act as Noah Brant would score a power play goal midway through the frame to make it 4-1.

The teams traded goals in the third as Adams was able to go top shelf on a 2-on-1 break, making the final 6-2 in favour of the hosts.

Call up and Sophiasburgh’s Aiden Reddick got an assist on the Adams maker while  fellow County resident Jacob Mulville and Stirling’s Matt Musclow also played in their first junior hockey game.

On Thursday, the Pirates managed to bottle up the Jets and keep the visitors to the outside of the defensive zone for much of the game.

Picton built a 1-0 lead in the first when Smith hit a streaking Boomhower at the side of the net for a tap-in and a 1-0 lead.

In the second, Morrison would pot a power play marker eight seconds into a man advantage and, after the Jets responded with a bank in goal, Smith would set up the captain for an insurance marker in the late going.

The Pirate ship seemed to be steaming to port with a preseason win in tow however disaster struck as the Jets managed to score two 6-on-5 goals in the final moments of the third to force overtime.

In the extra session with three skaters aside, Adams managed a breakaway from near his one blue line in on the Amherstview goal.

Adams caught iron with his game winning attempt and later, with the game now on his stick, Jets sniper Elliot Belzile capped off the comeback effort with a low shot that beat Wortman clean.

Picton hosts Port Hope on Thursday night at Lehigh Arena in Wellington at 8:30. The Pirates then finish off their preseason with an exhibition game in Napanee on Friday night at 7:30 p.m.