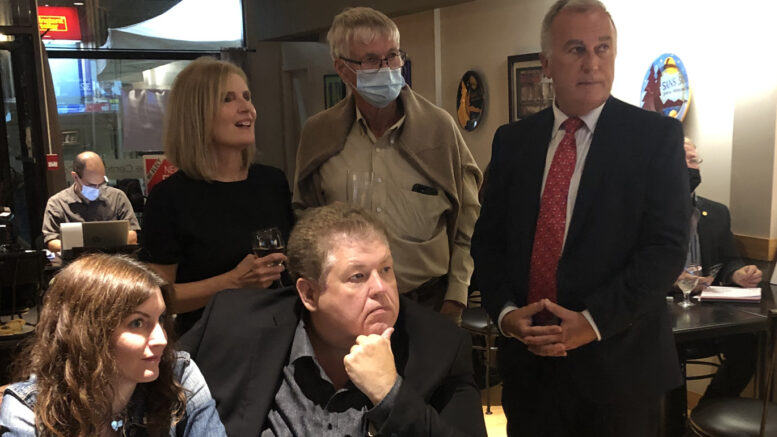 COMING TO THE END OF A LONG AND WINDING ROAD All eyes at Belleville’s San Souci Monday night watched the returns come in and the polling numbers were not good for (Right) incumbent Bay of Quinte Member of Parliament Neil Ellis. While members of the Liberal Party of Canada will form the next federal government, Ellis was defeated by Conservative Party of Canada member Ryan Williams. (Jason Parks/Gazette Staff)

Belleville’s Ryan Williams will be looking for fitting accommodations in the Ottawa area soon as the electors in the Bay of Quinte have seen fit to elect the hotelier as their next Member of Parliament.

Williams, formerly a member of Belleville City Council, was swept to victory over incumbent and Liberal Party of Canada member Neil Ellis in a nearly 3,000 vote victory. Williams topped the local polls with 23,284 with Ellis running second at 20,586. Picton’s Stephanie Bell of the New Democratic Party led the also-rans with 8,691 while Janine LeClerc of the People’s Party of Canada (2,873) came fourth and the Green’s Erica Charlton (1,307) running fifth. 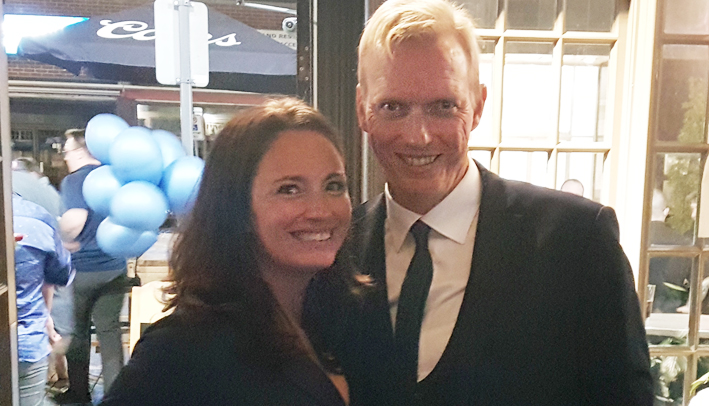 Nationally, the picture more or less stayed static as the Liberals had picked up an estimated 158 seats-not enough for a majority but enough to form the next government and keep Justin Trudeau as Prime Minister of Canada.

At Belleville’s Export Bar and Grill, the national picture took just enough of steam out of the establishment to keep full fledged euphoria from breaking out but confidence that the riding was transitioning from red to blue was enough for supporters of the Conservative Party of Canada to be in a celebratory mood.

Williams was on the verge of upending Ellis and punching his ticket to the House of Commons.

Finally, as Ellis conceded, the next MP for the Bay of Quinte was able to collect his thoughts and thank his supporters.

Williams said as the campaign wore on, the message to voters in the Bay of Quinte evolved and became more than his name or brand. It was a message about working hard today for a better tomorrow for the region.

“I am both humbled and honored that you have placed your confidence in me as your Member of Parliament as the first Conservative Member of Parliament for the Bay of Quinte,” Williams said. “Looking around this room tonight, I can say that we have worked harder than anyone else…and I believe hard work always pays off.” 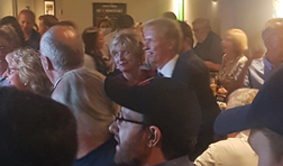 Williams recalled the image of his late father, John, who served as Quinte West Mayor for several terms. “I feel blessed as I begin this new journey, and I will continue to anchor my discussions and decisions on the core values that my family instilled in me; compassion, honesty, and integrity. I know dad would be proud, but I cannot help to think he would be telling me to wrap this up, get to work and get r done…dad, as always, you are right. It is time. The work starts now. Let’s get’er done!”

For Ellis, finally defeated after eight successful campaigns dating to his first foray as Mayor of the City of Belleville in 2006, the unknown of private life was still too far away to contemplate

. “This was a long hard-fought battle, the campaign was great and Ryan Williams did a great job,” Ellis said.

Ellis thanked his volunteers and his representatives that have supported him throughout the years. “The outcome wasn’t what we expected. It’s unfortunate but I wish Ryan all the luck. His success in Ottawa will be our success,” Ellis said. In a moment of unity, Ellis appeared at the Export, shared a drink with Williams and wished him well on the journey that lays ahead for the new MP.

To their credit, Williams supporters saluted Ellis and his six years of contributions to the community as their voice at the House of Commons.