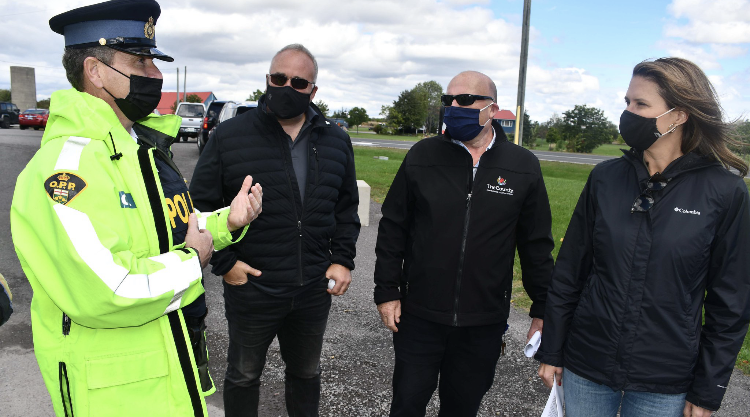 And beaches, wineries and restaurants were not among them.

“I find that sometimes it really helps to have a Minister on the ground in the riding to see the challenges firsthand and discuss how our government can help municipalities meet their needs,” said Smith. “This knowledge will be useful as the Ministry of Transportation plans its future programming.”

Mulroney added “When it comes to investing in Ontario’s transportation network, our government knows that there is no one-size-fits-all approach. We work closely with our municipal partners across the province as we deliver the critical projects that will meet communities’ needs for years to come.” 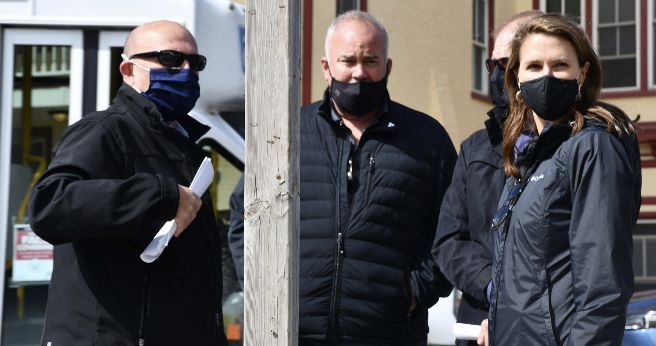 Mayor Ferguson, MPP Smith and Minister Mulroney at the top of the town hill. (Submitted Photo)

Departing Belleville,  the entourage travelled into Prince Edward County via County 49 to meet local officials at Picton’s town hill to learn more about how the County intends to improve safety via a provincial Connecting Links grant of up to $266,844.

The intersection where Bridge and Main St. merge has long been a source of confusion to visitors who anticipate a stop at the top of the town hill where none exists.

Later, County of Prince Edward Mayor Steve Ferguson and local OPP detachment commander Staff Sgt. John Hatch shared their ideas for safety improvements at the intersection of Hwy 62 and County Rd. 1. The two-way stop has been an attractant to multiple motor vehicle collisions during the high traffic summer season.

“We have enjoyed fruitful conversations with Minister Mulroney during delegation meetings at past municipal conferences about longstanding issues that we have been working to address. We are grateful she took the time to continue those conversations here today in Prince Edward County,” said Ferguson. “It is my hope that after travelling County Rd. 49 Minister Mulroney better understands the current state of the road and the importance of provincial funding to move the rehabilitation project forward. We were able to show her our concerns with the intersection of Hwy 62 and County Rd 1. We also welcomed the opportunity to explain to the Minister the improvements that will take place at the Picton Town Hill this fall thanks in part to the provincial funding through the Connecting Links programming.”

Earlier in the morning, the ministers started their day on a bus tour in the City of Belleville to highlight route expansion and six new buses purchased to support service expansion to the North East Industrial Park area through the Investing in Canada Infrastructure Program.  The trip included visits to new active transportation infrastructure along the Moira River.

In Belleville, Mayor Mitch Panciuk and City officials also discussed the safety of Hwy 401 interchanges and the need for an additional off-ramp, known as the Belleville East Arterial Route(BEAR) to divert industrial traffic away from residential and commercial areas along Cannifton Road as well as the future site of the Quinte Exhibition.

“We would like to thank Minister Caroline Mulroney and MPP Todd Smith for joining us for this morning’s tour,” said Panciuk. “The City of Belleville has been advocating for the Belleville East Arterial Road for many years. As our industrial park continues to grow at a rapid rate, the need for this route is becoming increasingly important for the preservation of our roads. We appreciate Minister Mulroney and MPP Smith taking time out of their busy schedules to view the route and listen to our City’s needs.”